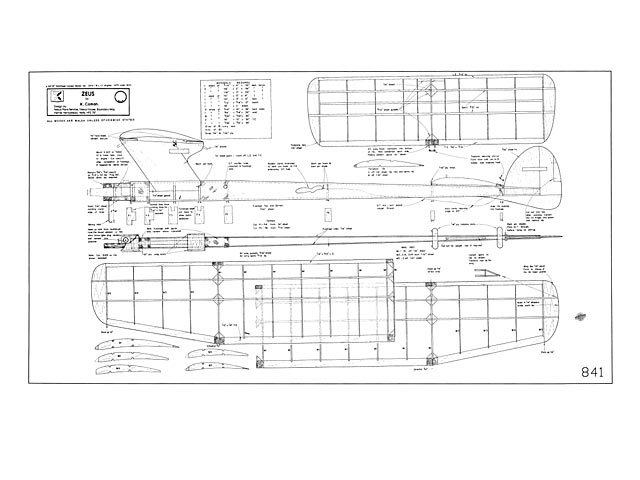 Quote: "Zeus was designed to utilize a rather aged Frog '80' that was not earning its keep. Any .8cc engine will do, providing the bearer holes are not drilled until the model is finished. Adjust engine position to give correct balance forward for light glow plug engines, and fit the timer behind the engine.

The design was based on a well tried and tested Open Power contest configuration. Well known construction methods are used because a good strength/weight ratio is essential for 1/2A. The aim has been for largest span compatible with a .8cc engine and a maximum weight of 7oz. This was achieved in the prototype and the resulting performance was very impressive with an extremely fast climb, turning 2-1/2 times and rolling smoothly off the top. The average duration has been 160sec in wind or calm, and maximums abundant. It has won several club competitions and, won the AA Power Contest at the RAF Model Aircraft Association Annual Meeting. It is very robust, having flown over 200 times without needing repair. Wing section is based on a modified NACA 6409 which, in conjunction with a large tailplane, gives excellent results in power contest models. Tapered wing tips employing wash-out are responsible for the very good 'off-climb' recovery. Should the engine cut when the model is vertical, stable flat glide is restored after only two stalls.

Beginners need have no fear of Zeus. The climb, though fast is safe, and if the model is built accurately, little or no trimming is required. Start construction by making up bearers on to F1 and F2, allow them to set thoroughly. Cut the top and bottom of fuselage from 3/32in sheet and all the fuselage formers. Pin bottom of fuselage to board, cement bearer assembly into position and then cement formers into place..."

Update 21/02/2020: Added supplement article 'Chuck it and Chase it', detailing electric conversion of the Zeus, from Silent Flight June/July 1995, thanks to RFJ.

Quote: "Chuck it and Chase it. Electric Zeus, the Saga. Steve Auvache sparks it off with the Gods.

Over the years, I have read hundreds of 'How I Built It' articles and do not recall a single one which admitted to having had any problems of note. Well 'now for something completely different' as they say. Having said that, 1 should stress that all of the problems I encountered when building the model were entirely of my own making and nothing to do with the original design.

I have been trying to encourage the Free Flight Establishment to take notice of the emerging desire of many modellers to fly competitive EFF and, in return, have received more than a little advice about the techniques that I might find successful. One particular piece of advice I thought was very useful. It was suggested: In order to make our case more acceptable, we should be flying models which looked 'familiar' to mainstream Free Flighters. Having already decided to build a model of more or less 1/2A proportions (8-9 oz, 250sq ins), I figured I might as well go the whole hog and convert a 1/2A contest power ship to Electric.

My eventual choice of Zeus was based almost entirely on aesthetic reasons. Never forget; if it looks good, it will fly even better. Keith Coman made a nice job of the original 40 in span model back in 1963 - hope he likes what we have done to it.

The plan: The plan itself is to the usual high Aeromodeller Plans Service standard; detailing everything, including a shopping list of materials. Despite a lot of effort can find no omissions or errors. Zeus is fairly typical of its era; a 1960s 1/2A contest power model. This means there is no excess fat anywhere, or excess balsa for that matter. This is a bit daunting to someone like me, who tends to go for the 'two bits where one will do' approach. This does not mean I would have to go silly on wood selection and use nothing but contest grade balsa, ordinary 'cooking' wood is more than good enough for an experiment. The lightweight stuff can come later.

The wing and tailplane:The plan shows a no frills wing of very conventional, albeit lightweight, construction. Experience has taught me that the way to build wings is to take my time and give it some thought first - not forgetting jigs with everything. With the very light structures found in models such as Zeus, even slight stresses can cause them to warp horribly and it really does pay to take care when fitting the components together. The only bits which really caused me problems were the wing tips. You are supposed to curve a bit of 1-1/16 balsa to the profile of the lower surface. I do not fancy the future effects of the balsa trying to straighten itself out; although it seems OK at the moment. Perhaps a few weekends spent lying in damp grass will show whether I am right to worry or not.

The tailplane is constructed in much the same way as the wing, but as it is without the dihedral joints and bent tips it is a much easier process and, in relative terms, much more substantial than the wing.

The fuselage: Now the problems start. The modifications to change the design from nasty noisy power to nice quiet Electrics are basically straightforward, provided a little care is exercised. Remember, do as I say not as I did!

Widen the front of the fuselage sufficient to take a Speed 400, leave out the hardwood engine bearers and modify the fuselage formers to take account of this. Extend the fuselage bottom and side sheeting forward to accommodate the motor and bits, fit a ply motor mounting plate at the front. Reinforce the corners of the motor box with triangular strip and sand the whole thing down to as round as you dare. Finally add a little reinforcing to the area carrying the batteries.

What could possibly be hard about that? What indeed? I built this beautiful fuselage, straight as a Brussels Banana, light, perfect in every respect. I even got the fin upright. Just the one minor problem: it was too narrow to take all the hardware. Oops. On then to the Mark II.

The original Zeus fuselage is extremely skinny and has to be widened (enough!) to fully enclose a Speed 400. This extra width was continued to the rear of the pylon and then the taper was made from there to the tail. The fuselage top sheeting forward of the pylon should be converted into a hatch cover to allow access to all the wiring. An unexpected bonus occurred (I got something right at least); I had intended to fit the batteries behind the wing. I now have the space to fit the batteries either side of the wing pylon and directly under the CG.

When experimenting with a new electric model I have generally found it best to leave the fuselage an inch or so longer than necessary and install the motor last. Exactly where is a simple matter when you are building the 3rd or 4th model in a series and have ironed out all the bugs..." 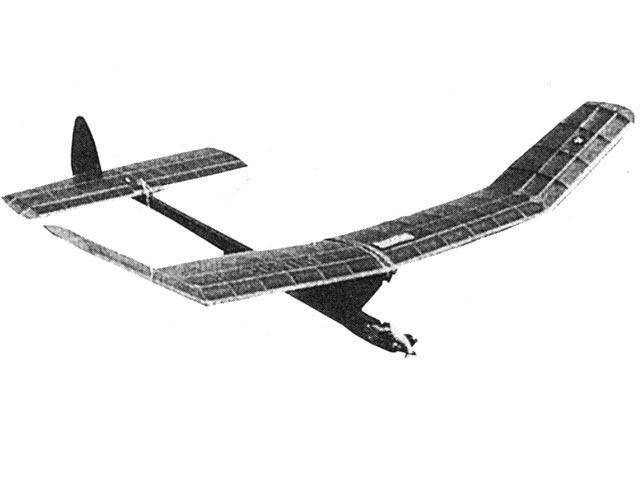