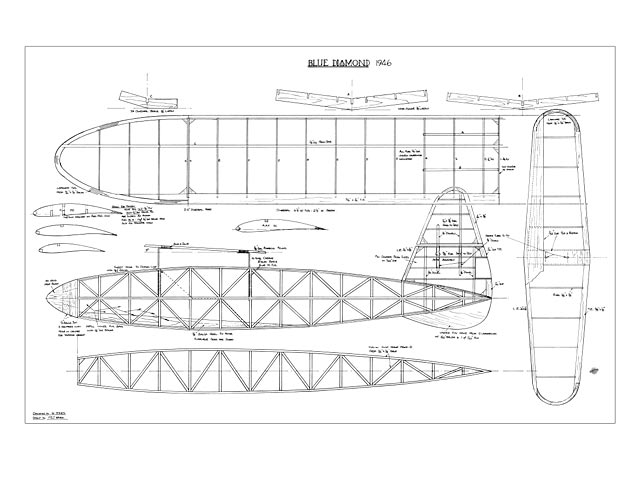 Quote: "BLUE DIAMOND was built in the early summer; the span being about the limit for gliding in a small public park, such as are usually found in any urban district. Wing span is 60in with a chord of 6in, the popular parasol wing mounting is employed and the tail placed high on the fin to reduce risk of damage on landing. In the first contest in which it was entered, the M.E. No. 1, aggregate was 970.2 secs. (Best flight 672.2 sec, OOS) Using the model again in the Thurston Cup, the aggregate was 666.0 secs., one flight being 360.4 secs. In the SMAE cup the model flew away again, this time OOS for 13 min 53 sec and landed three fields away, the aggregate for three flights being 1,163.4 sec, which placed it fourth in the competition. So much for the model's performance to date.

Fuselage Construction. The two sides are built in the usual way as for slabsiders. The hardwood longerons are first bent or steamed to the correct shape before the uprights are cemented into position. It is wise to make four cross struts for each bay, these all being the same. This makes it simpler to secure a truly square fuselage. The diagonals or cross-bracing struts can be put in after the two sides are joined together. Fill in front of fuselage with in. sheet hardwood to form back for weight-box. The hardwood nose and hollowed out laminations of balsa comprising the weight-box are the next step..."

The Blue Diamond design appeared in Aeromodeller Spetember 1946 (thanks Aeromeddler). This here is a later, re-drawn version of the plan. Legend reads: "Designed by W Jones. Drawn by FEJ White." 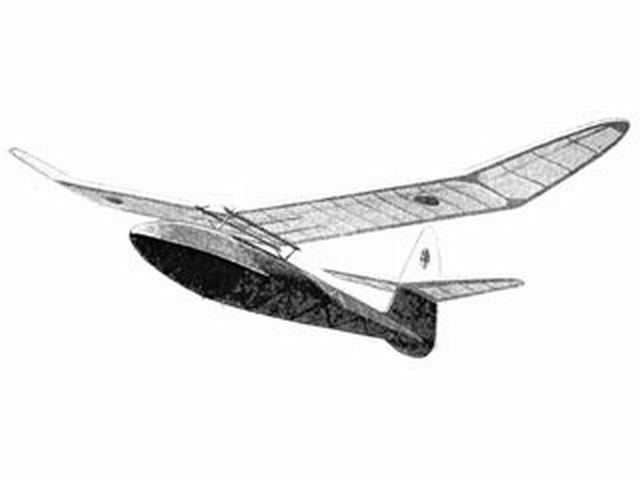