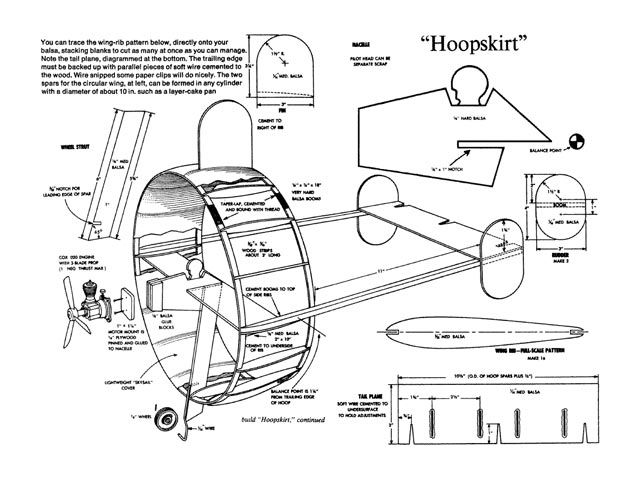 Quote: "Flying barrels have been in the air since Bleriot, but this model proves they can still turn in a top performance . Trot this modelout on the field at your next meet and watch the eyes bug. If anybody snickers, put 'em in their place by reminding them that the annular wing is a very old aeronautical principle. Then launch your Hoopskirt. If its tradition hasn't impressed them, its performance is certain to!

At least a half-dozen full-scale planes (plus innumerable kites and gliders) have been built on the flying barrel design. One of the initial aircraft made by Ellehammer - the first Dane to fly - took this form. Louis Bleriot, the daring Frenchman who was the first to fly the English Channel, perched one on floats and tried, with indifferent success, to get it off the water. The French are still at it; their latest attempt at annular-winged aircraft is a tail sitting jet.

One of the big advantages of this design is its propulsive efficiency. Efficiency in a flying system is highest when the velocity of the discharged air is almost as great as the forward speed of the plane. This means that it's better to move a lot of air relatively slowly than a small amount at high speed. (It's rather like matching impedances.) The annular wing with a propeller ahead of it functions as an effective aspirator to increase the amount of air thrust backward. Such a wing has more lift than you might think. The closed-circuit nature of the airfoil eliminates wing-tip vortices.

Theoretically, a hoop-wing plane shouldn't have to bank in order to turn. This model does, however, because of the vertical stabilizing fin at the top of the wing. This was added to produce an effect comparable to dihedral. The Hoopskirt is an extremely stable flying machine. It'll teach you a lot about this offbeat configuration. Don't let the circular wing scare you - it's quite easy to build. Any cylinder with a diameter of about 10in (a half inch either way won't hurt) can serve as a mold for the two spars. I used a straight-sided layer-cake pan. The spars can be of any lightwood that bends easily when soaked in hot water. Bind these around the mould..." 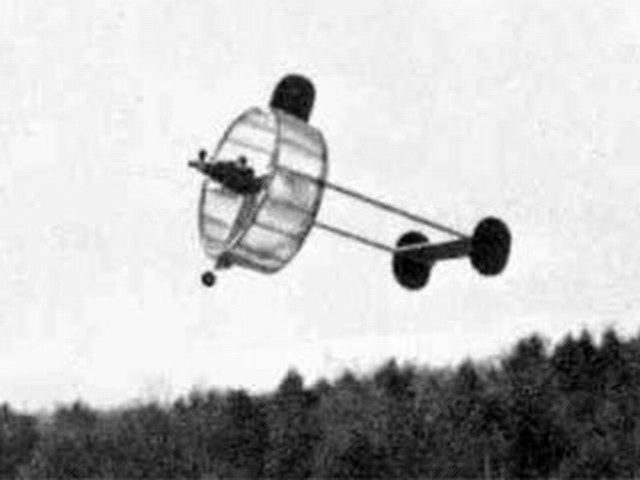