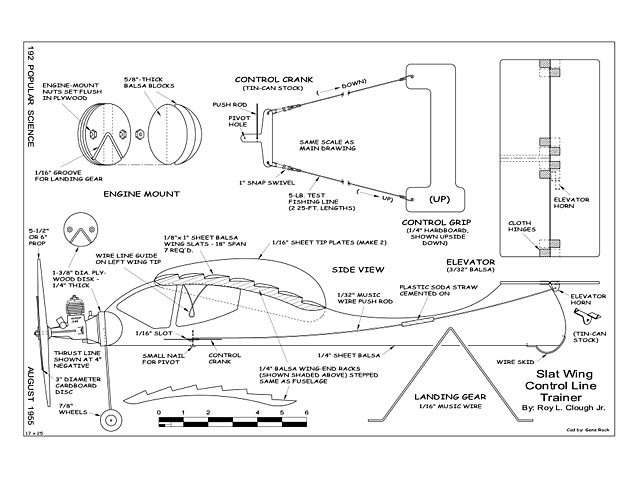 Quote: "I Fly a Control-Line Trainer. It looks like a refugee from a Venetian-blind factory, but it flies fine - and it won't stall.

Now, here was Roy Clough Jr, whose model I'd cracked up, with another plane, a funny-looking one. The wing was a series of slats with air spaces between. And there was a big cardboard disk in front of the prop. "What have you got there?" I asked. Roy - who had been mighty nice about his plane - explained that lots of beginners cracked up control-line jobs because they are so fast and so easy to stall if you freeze on the controls. Then he grinned. "This," he explained, "is a control-line model designed especially for beginners - a basic trainer. She's slow and she won't stall. Swell for kids to learn with. Why, I bet even you will be able to fly her."

I was in no position to resent that. Instead, I asked for a demonstration. The little plane took off slow and easy and went around the circle with a lazy lope like a tired hound-dog. Then Roy stuck her nose up and held it there. Instead of stalling and crashing, she kept mushing around, nose in the air, even slower - walking speed. Roy wasn't kidding. This little job was as different from the model I'd flown before as a cub trainer is from a Shooting Star. "What's the secret?" I asked. He pointed to the slat wing and the prop disk. "The disk spoils the air stream from the prop so that the plane travels slowly. And she gets the lift to keep going at low speeds from this fancy wing.

Air compressed under the wing by the forward motion is squirted through the spaces and over the slats to provide the lift. "And notice the low angle of that front strip," he went on. "That's what keeps her from stalling even when the nose is way up." I took the controls, and Roy was right. Even I could fly this job, and I could turn her over to small fry with little risk of a discouraging crack-up on the first try. What was equally important, I found I could build a trainer model for the kids myself. So can you. Here's how to go about it.

Fuselage. Trace the fuselage outline on a sheet of 1/4in balsa and cut it out with a razor or a modeler's knife..."

This is a modern re-drawn plan in PDF vector format.

Hi again Steve and Mary, Another Roy Clough design; this is another unusual design, a slat wing control line trainer. The two attachments have the full size cad drawing and the article. The article was written by James Webb. Gene 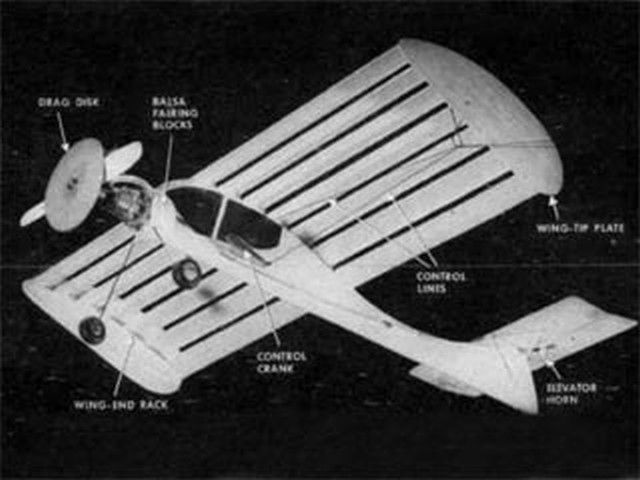 Many thanks for the pictures and plan. I built this model in my youth and I still remember it. The power was a Webra 1.5 cc diesel engine. The plans were published in an Italian magazine that I tried to find with no avail. Many thanks again. I wonder how to modify into an rc electric one?
Silvio - 09/12/2018
Add a comment