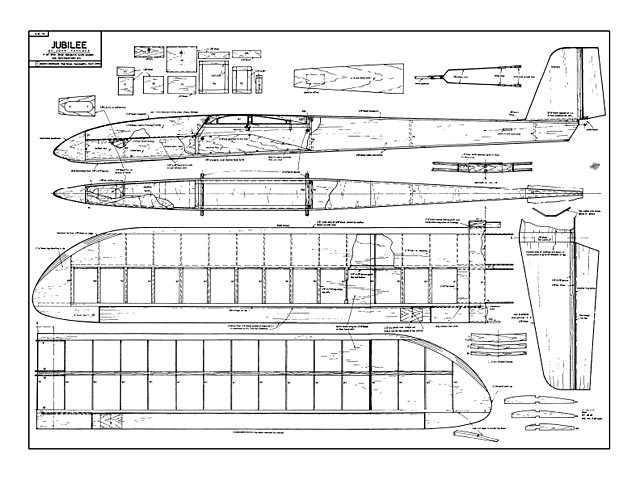 Quote: "ON THE glider pages of the journals we often see pictures of smiling experts casually displaying models that have performed faultlessly for hours on end. Earnest, competent lads who hurl their magnificant machines out into space from awe-inspiring slopes, and do precision manoeuvres with casual ease, in idyllic conditions.

Now, I may be unfortunate - or perhaps I have annoyed some ancient Celtic god who looked after hill forts before the National Trust took over - but rarely do I get conditions like the aforementioned fliers enjoy. In the beginning, there was always the 'wrong model' situation. I would drive many leagues, struggle up some first cousin to Everest and, on cresting the ridge, the 30 knot breeze would immediately die to a zephyr - rendering the symmetrical sectioned javelin I had hauled up there as much use as a bucket of wet sand. Alternatively the 12ft. symphony of structural delight would be torn from my nerveless grasp by an unforecast local hurricane. I did get bored with it - and so did my poor wife - 'I've brought the wrong model' - and she would tremble and shed a little sigh and kick the dog.

I eventually reacted to this state of affairs by making a model that was very light with a semi-symmetrical aerofoil (Eppler 374) and a ballast box for windy weather. It also had provision to droop ailerons for lift scratching. I did a lot of cut and try with this model experimenting with tailplane sizes, control move-ments, rigging angles and CG positions. It led me back to the conclusion that - for all round flying (not competitions, which are not my kind of entertainment) simple and light was best. Suprise, suprise!

The outcome of all this was an aeroplane with a slim, flat-bottomed aerofoil, no gadgets and a simple, clean shape that I could make without complication. The weight was a minimum consistent with the realities of landing on nasty-shaped ground. I also experimented with wing-tip shapes because tip stalling can be a hazard with this sort of model. It had a ballast box originally but, since it proved capable of flying from a good slope in anything from 8 to 30 knots, ballast was never needed. Mine weighs almost 2lb giving a wing loading of about 10oz/sq ft. This explains the ability to fly in lower wind speeds, being a little low by slope soarer standards. Above all else, it is an easy model to fly in widely varying conditions and my 'wrong model' situation is now a much less frequent occurrence.

CONSTRUCTION Although this is quite simple and orthodox, a few notes are probably useful to read in conjunction with the drawing... " 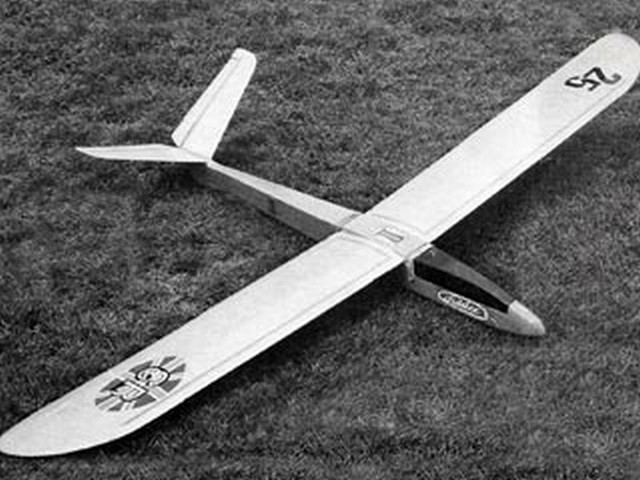 Please add the attached image of my Jubilee to your Jubilee page [more pics 003]. Many thanks for all your sterling work on these plans from yesteryear.
GeeW - 12/01/2018
I have built a couple of these from the original plans and the actual span is more like 65in. I ironed out the design's shortcomings on my second attempt by rounding off the fuselage corners and replacing the heavy sheet balsa tail with a Correx version.
RussellH - 16/01/2018
Attached is a picture of my second attempt at building John Hancock's Jubilee glider model [more pics 004], based on the plan supplied with my Bowman Models kit which came out in the 1980s I think. In marginal lift conditions on the slope it will sail serenely by while foamy flying wings flutter down like autumn leaves. It really is good to have, to avoid that 'wrong model' syndrome.
RussellH - 17/01/2018
Here's another one, just finished [more pics 005, 006]. As yet unflown but the one I built almost 40 years ago I remember fondly as being a great all round sports flier, especially good in light conditions. I've made a few minor mods on this one but built as per plan it's absolutely fine anyway. It's the Jubilee designed by John Hancock.
PeteS - 29/12/2018
Add a comment