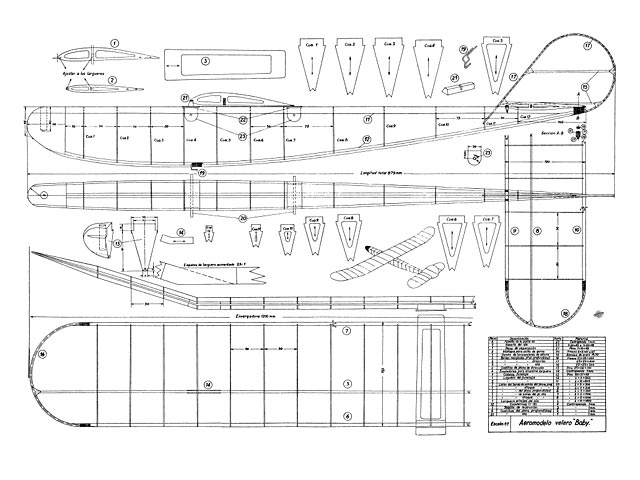 Quote: "Hi Mary and Steve, Here is the Spanish version of the 1934 Helmut Kirschke FF glider Baby (oz7417) which was used as a basic glider in the Spanish aeromodelling schools founded in the early forties.

Apart from the plan, I'm sending too a translation of the materials list into English, a copy of the original German advertisement from the Segelflieger magazine dated May 1934 [pic 003] and an interesting 1947 picture of the workshop from the Aeromodelling School of the city of Soria, with a 'Baby' hanging from the ceiling [pic 004]. Best regards, Alcalaino"

Note this version of the Baby plan shows fuselage layout at full length - the previous version was shortened, presumably to fit within a certain print size.

Quote: "Hello Mary and Steve, here are the instructions for the Baby Spanish glider oz9667, scanned from a Spanish book (Aeromodelismo Veleros, Ed Doncel 1966), also a text file. Regards and once again all my congratulations for your magnificent site,"

Quote (google-translated from the Spanish Instructions): "The second stage of this learning period is to build another somewhat more complicated model aircraft. This is the 'Baby'. This teaching glider is a true veteran and thousands of modellers have learned to build with it. It has German origin and it is a pity that we cannot know who its designer was. In Germany it was already used as an apparatus to be built in the teaching phase. It has an extensive service record, because it is a glider that, being well 'centered', has excellent flight conditions, as whoever builds it can personally verify. For now, now we remember Babys launched at Cuatro Vientos (military airfield in Madrid) and picked up in Guadalajara, and others lost sight of due to the heights reached in their flights.

In short, it is a well-thought-out model aircraft that, once built, delights its builder with its splendid flight conditions and high resistance. Regarding the Camp, we have to say that it requires a greater effort and a more delicate work. You have to refine and work a little more, but it's worth it. To the facts we refer.

As we did with the Camp, in addition to pointing out the most suitable working methods, we will explain the new materials that appear, as well as the correct use of the tools that, although necessary, have not been mentioned until that moment.

First, a perspective of the model so that curiosity is satisfied. (Figure 55.)

As it is easy to verify, the Baby is a model aircraft that because it is "normal" has: 1) fuselage, 2) stabilizer planes and 3) lift plane.

And now, as it has already been clarified what the three parts of a model aircraft consist of and the function fulfilled by each of them has been explained, we can go directly to detailing their respective constructions.

Fuselage: The fuselage of the Baby is made up of the following parts:
1) nose
2) stringers
3) frames
4) launching hook
5) hooking slats
6) hooking slat plates
7) fixed plane support of direction.

Nose: It has to start from a piece of pine wood with the following dimensions: 38 X 71 X 65 mm. Obtaining this block can be achieved by properly using the saw on the necessary wood, or by contacting a carpentry workshop, in order to order several Baby nose blocks at once.

Having the block in question, it is necessary to fix the necessary points to rough what is left over using the saw, the rasp, the file and the sandpaper, successively, in order to give it the shape that marks the plane of the model aircraft. (Figure 56.)

So you need to do the following..." 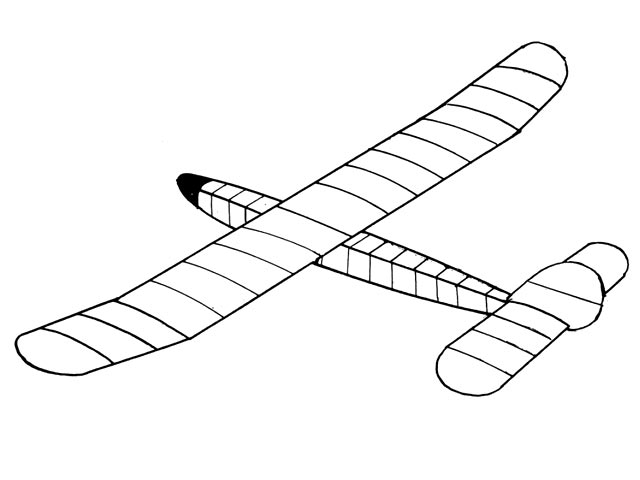 These photos are especially dedicated to the Babys that the state schools of Aeromodelismo adopted as models of "second step" and all of us who attend these to build and fly [more pics 005-009] . The oldest photos correspond to Schools of the forties. I have also sent a picture with two RECORDS of distance, of 1945 and 1948: Cuatro Vientos (Madrid) - Toledo and Cuatro Vientos (Madrid) Yunquera de Henares (Guadalajara). The first made by the School of Loro?o and the second by Zamora with 68 and 89.5 Km. Both made with BABYS. The photos of the girl correspond to the version we built at the School of Toledo in 1972.
Pajariperro - 09/03/2018
Sometimes I wonder if Helmut Kirschke, designer of this fabulous machine, will still live. Be a grateful gesture for the hours of happy flights and better construction of this small but great model airplane. I decided in October of last year to make two Babys, one in a scale of 1:1 and another one a little larger 1:1.5 (1m20cm and 1m80cm.) As faithful as possible to the original design except the pendular system of the horizontal plane of the tail. This was my job during Christmas and part of the month of January [more pics 010-018]. At the end of February, after the probe and after three great and sunny days with flights in some cases over an hour, I finished and prepared for a good spring. After the test flights, the color and fix ballast for the spring, I will send you pictures in flight and the times I get. Thank you for assisting me.
Pajariperro - 09/03/2018
The SAM chapter 71 has held some meetings and they have given us opportunity to take photos. The first three correspond to the ID 9667 OZ Baby [more pics 019-021].
Pajariperro - 29/12/2018
It looks like Baby has been posted twice.
Gene - 28/04/2019
Add a comment