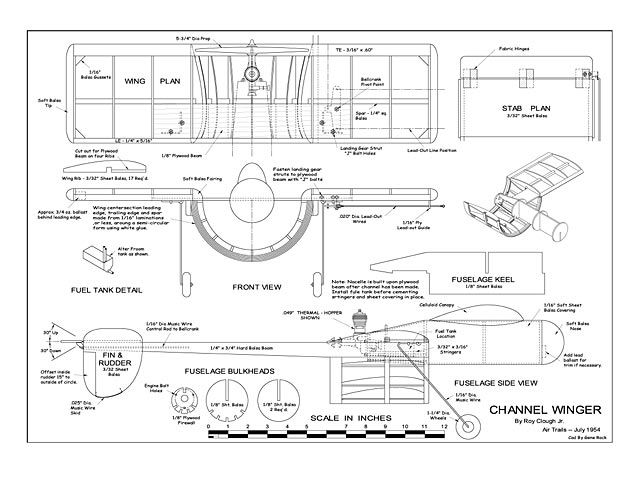 Quote: "The main idea behind the channel wing configuration is that if air can be kept flowing over a wing section lift will be produced regardless of the forward speed of that wing through the air. So the Custer Channel uses a semicircular airfoil section with the propeller mounted just inside the trailing edge to insure a strong draft through the channel which is independent of forward motion. Thus there is a section of the wing which can never stall - as long as the motor keeps running. This, Custer reasoned, should allow very steep take-off and landing patterns and greatly reduce ground run.

There seems to be little doubt, on the basis of our tests, that the channel reduces take-off run and does indeed produce some static lift. It will also operate well beyond normal stalling angles without paying off. The increase in static lift in flight - a condition which occurs when the model is put up in a four-cycle and suddenly leans out - is noticeable as a sudden ballooning, similar to that which takes place when a dummy bomb is dropped from a stunt job. The model not only scoots ahead faster, it also rises up a foot or two. This does not make it difficult to control; the effect may be explained by noting that, all things being equal, it takes more up-elevator to fly a heavy ship than a light one. When the motor leans out in the channel job it suddenly gets quite a bit 'lighter'.

Don't let the U-shaped wing scare you. It is quite easy. The first item needed is a standard gallon size fruit juice can (try a hotel or restaurant) to serve as the mold for the laminated spars. Wrap a layer of wax paper around the can, soak the 1/32in spar blanks in warm water for a few minutes and layer up the spars using Weldwood Plastic resin glue or something similar..." 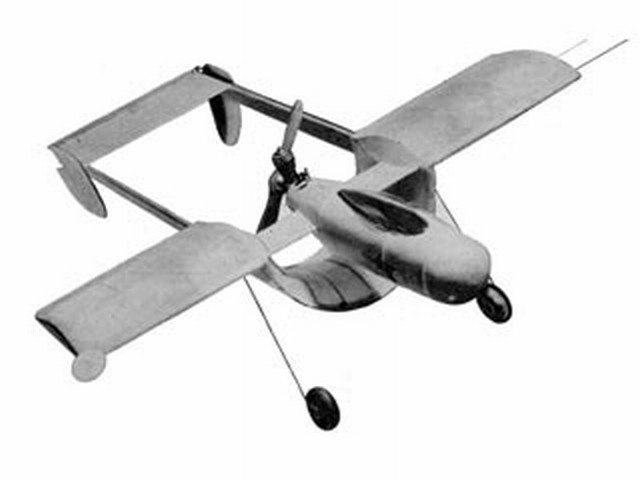