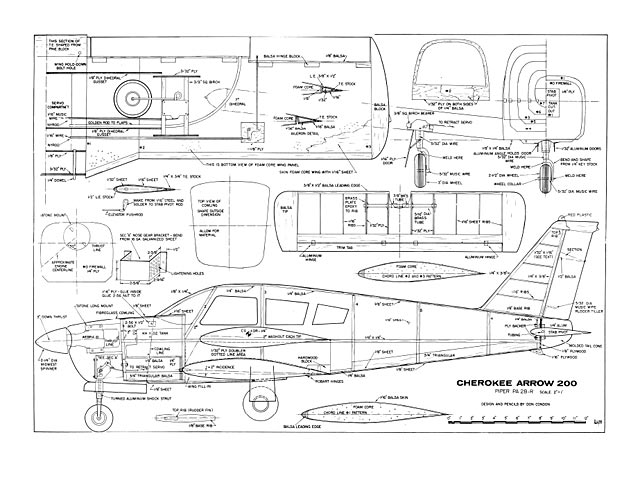 Quote: "Have you ever wanted to build a good Scale or Stand-Off Scale model that was easy to research, flexible in color scheme, and several models of the same manufacture could be built from the set of plans? Then look no further, here it is. With very little change, you can build the Piper Cherokee 140 and 180.

I built the Arrow 200 because I wanted retracts, but the 180 is identical, except for the fixed gear, and the 140 is the same but has two side windows instead of three. The fuselage, wing, tail assembly, and cowling are the same for all, at least for Stand-Off purposes. A little checking will show the slight differences in the cowling and vents.

The real joy of this model is that at almost any airport, you can find a Cherokee to photograph and get your color plan from. This is a 1969 model, and if you go to a 1971, or newer, you gain another advantage. In 1971, and newer models, the wing and stab were increased two feet in span (4in on model), chord and airfoil remain the same. On this model, that's 45 square inches more area, and that makes the loading less per square foot.

If you are still interested, let's get started. To use an old phrase, this is not a beginner's project, so I will only try to explain what may not be too obvious on the plans, or anything of an unusual nature in construction..."