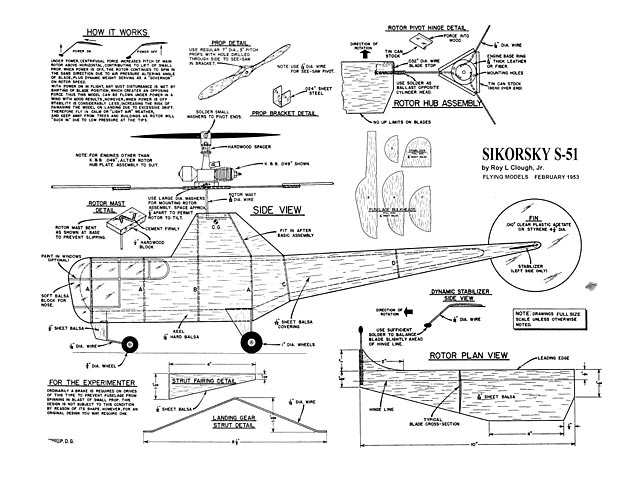 Quote: "Probably the most famous design of pioneer helicopter builder Igor Sikorsky, the S-51 helicopter has racked up an impressive record in life-saving and rescue operations, both at home and abroad. It is the standard unit of Los Angeles Airways, first airline with scheduled helicopter operation, and has been manufactured in England by Westland under license from the parent company. In addition to its performance record, it is generally agreed to be the most beautiful rotary wing craft ever built, with clean flowing lines that adapt themselves readily to scale model practice.

The big ship uses a three-bladed rotor of the type known in the trade as the 'flapping blade' or articulated system. This rotor type has an extreme degree of maneuverability with rapid control reactions and is quite stable in normal cruising flight. The torque effect of the rotor is nullified by a small rotor attached to the tail boom which produces a counteractive side thrust and is used as a heading control. This arrangement is fine for a full-scale craft, but the unstable hovering characteristics of an articulated rotor limits its usefulness to piloted craft - it is not the best system to use on a model which must fly independently and has no pilot aboard to correct disturbances due to gusts or roughness in the air which are present under even the most ideal conditions. Therefore we must use a rotor, which has a degree of automatic stability if we wish our model to fly for more than a few seconds without skating wildly in all directions and finally crashing.

Our first S-51 model, therefore, used a dynamically stabilized rotor of the so-called 'feathering' type. That is, the blades did not flap up and down, but rotated within limits in a span-wise plane, allowing flight deflections to register as pitch changes instead of flapping movements. The pitch changes served to maintain the stability of the machine by adjusting the lift of the rotor from sideto- side as required, since the blades were independent of each other and, to a limited extent, of the rotor shaft. Pitch was determined by rotational speed (centrifugal force) and the model used a rear torque correcting propeller. The power was rubber and thrust was transmitted through a bevel gear drive to the main rotor and by pulley to the tail rotor. This model flew very well, was stable and able to cope with rough air without upsetting or going into a wild dance. However, the duration was very limited and the altitude attained was not very great, due to the complexity of the machinery required and the rather sharply limited output of twisted rubber bands.

We decided to scrap this design in favor of something that could be powered by a 1/2A engine, on the theory that builders would rather have a much simpler model with greater performance, and would be willing to sacrifice a bit of scale appearance to get it. By using the torque-reaction drive, we eliminated gearing and clutches and the need for a torque prop.

The dynamic stabilizers, which govern individual blade pitch, were retained, giving a good, positive and fully automatic auto-rotational let-down when the motor quit—an important factor in models having any considerable weight and power. The torque prop, an outstanding feature of the original, was replaced with a clear disk of plastic, which serves as a fin. The result is a model which is quite realistic in flight, more rugged in construction, and actually much simpler to build than the original rubber-powered version.

Construction: The fuselage is a straightforward semi-monocoque keel-type affair. Build one side over the keel on a flat surface to insure good alignment, then put on the half-bulkheads on the other side..."

Quote: "Hi Steve & Mary, Here is another Roy Clough free flight helicopter that I don't think that you have. Merry Christmas! Gene" 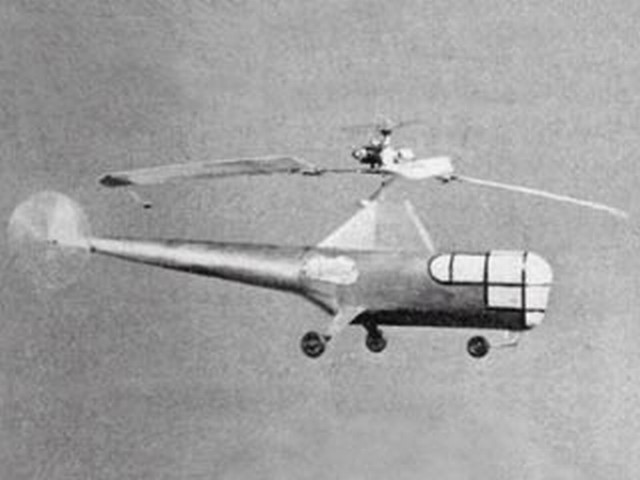