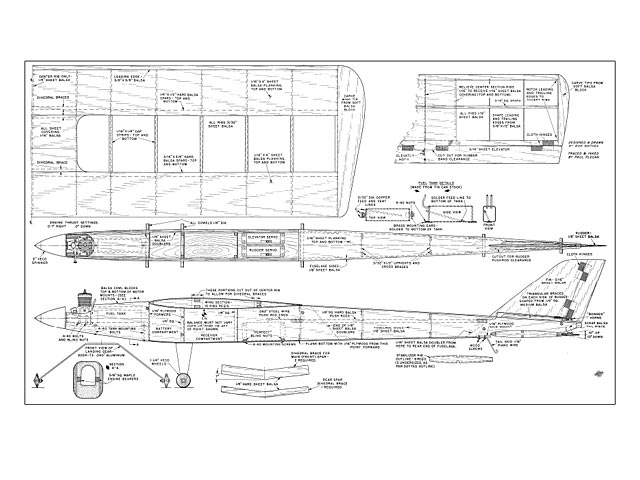 Quote: "One of the fastest pylon racers in the nation, this is the job that holds the world FAI RC speed record.

More and more modelers, tiring of the pace of stunt flying and the necessity of buying the latest equipment to stay in, the seemingly endless channel race, are taking up speed. Here, real skill in design, preparation and flying pays off, and if you have that certain touch that only patience and practice brings, a comparatively small investment of time and money will bring just returns.

When I learned the Fast Club was sponsoring a contest for FAI speed and AMA pylon, I decided to attempt an aircraft capable of breaking the world's record of 66.1 mph held by Russia. As I envisioned this model, it would require the maximum allowable displacement to obtain a speed of over 100 mph, the goal I had established for myself. The McCoy 60 was chosen as a powerplant as it is an extremely well designed and constructed piece of machinery, leaving a trail of records and performances the world over. A used 60 was obtained with intake throttle installed, should first flights become hairy. The engine was not modified from its stock condition in the interest of ease of starting and reliability, other than addition of this throttle.

Rather than attempt to develop a new airplane in the short time available, I chose to modify my AMA pylon design for the big mill. This was accomplished by reduction of the wing and stab areas and widening of the fuselage. Both wing and stab were covered with sheet balsa for rigidity and aerodynamic efficiency. An eight-channel receiver was installed. Only six channels were utilized to control rudder, elevator and engine. Finally everything was ready, and we were off to the Los Angeles Model Airport for the test flights..." 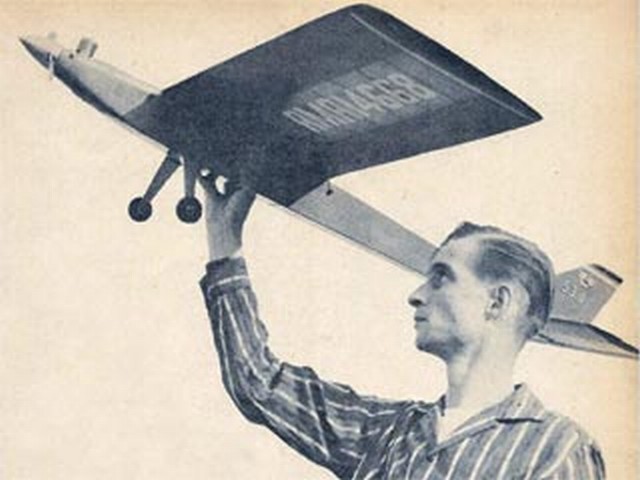