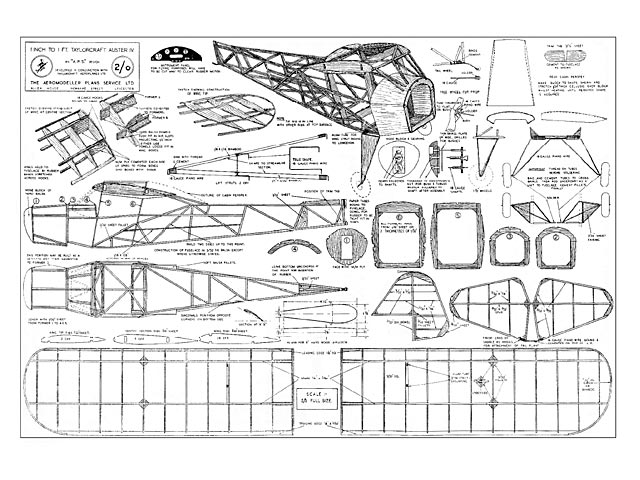 Quote: "The construction of the fuselage, although it may look rather complicated from the drawing, is, in fact, quite simple, and at the same time very strong and light. First, the two fuselage sides are built on the plan with the bottom longeron extending as far as former (3). The cross braces are added only as far as the rear of the cabin.

Remove the fuselage sides from the plan, add formers and cement firmly into position on the bottom longeron. The two main side stringers are then added, followed by the former immediately in front of the cabin struts.

The rest of the stringers and spacers and the one remaining former may then be added. The portion between farmers (3) and (4) is covered with 1/32 in sheet balsa. Two pieces of 3/32 in sheet are cemented where shown, for the rubber anchorage. The front portion of the fuselage may either be built straight on to the fuselage, or made as a separate unit and cemented to the main fuselage.

Wing Centre Section. The two root ribs are cut from sheet and cemented to the sides of the main formers. The leading edge is then added, also the cabin struts and the two trailing edge fairings. The two dowels for the wing attachment should be a push fit. Runners may then be cemented in between the two ribs.

After the model has been covered the centre section and cabin are covered with celluloid. If any difficulty is experienced with the curvature of the cabin, the celluloid may be heated and pressed over a mould. This method has been described in the Aeromodeller many times previously, and the reader should refer to back issues if in doubt.

The wings are of very straightforward construction, being of the multi-spar type. The ribs are cut from 1/32 in. sheet, Twenty-four off for the main rib and two off for the tip rib. The wing is laid down on the plan and built up in the usual manner. Great care should be taken when making the tip to get the spars tapering at the right angle..." 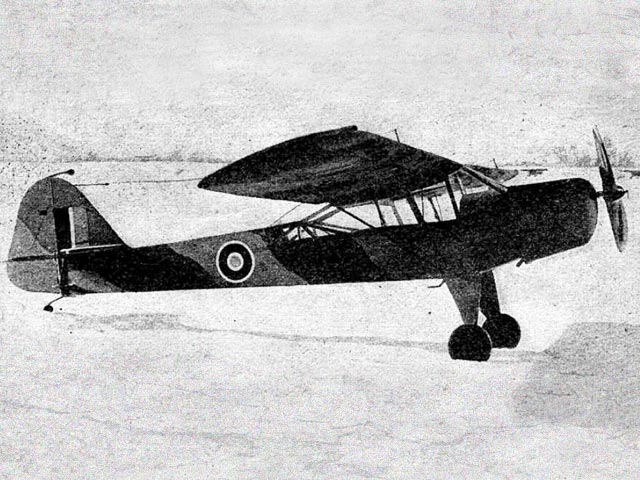 I have just downloaded the plan for the Taylorcraft model from 1944 and am very puzzled as to the construction of the fuz. There is a note that says build the two fuz sides to the point which is just behind the cabin. There is no note as to what construction the rest of the fuselage is or how it is attached. I have been making models for more years than I care to remember and have never come up against this before. Does anyone have any ideas about this ?
Oldtimer 80 - 14/05/2020
I'd say the shape of the front part of the fuselage is dictated by formers 5 and 6 not the side frames. So build up to the point indicated in the usual way flat on plan, but with full length lower longeron all the way to the cowling. Then separate sides and add cabin formers, stringers etc. Crack/reglue the lower longeron as it comes in quite sharply to the rear cowling. Or you could build the "Aeromodels" Taylorcraft Auster (oz5378); same sized model which seems slightly easier to build.
Pete - 17/05/2020
The way I read it, the fuselage sides that get built over the plan, are basically the aft end of the fuselage. The fuselage is built from the back forward. Build the two "aft" sides first, then you glue the cross pieces in next, assembling the two sides over the top view of the plan. You then have a "box" tailcone. You remove that from the plan; the bottom longeron will be very spindly, extending forward, unsupported until the formers get added. Then the cabin area gets built in, using the sheet formers. All of the diagonals in the cabin area get put in next, and they lay into the notches on the sheet formers. It helps to visualize that the center/cabin area of the fuselage is not flat sided or in the same "plane" as the aft/flat sides. The only part that is built flat over the side view, is the part that runs from the arrow (and the note you mention) back to the tailpost. I think the wording is poor, and it is not clear that the fuselage is built "rear to front" rather than "front to rear." Hope that helps!
Dave D - 17/05/2020
many thanks for your interest in my problem. looks like it will be a build and try method, and hope for the best. The only thing that puts me off having a go at this one is the moulded canopy. I did the Auster AOP9 some time ago which turned out not too bad, Flew well.
Old Jack - 21/05/2020
Add a comment