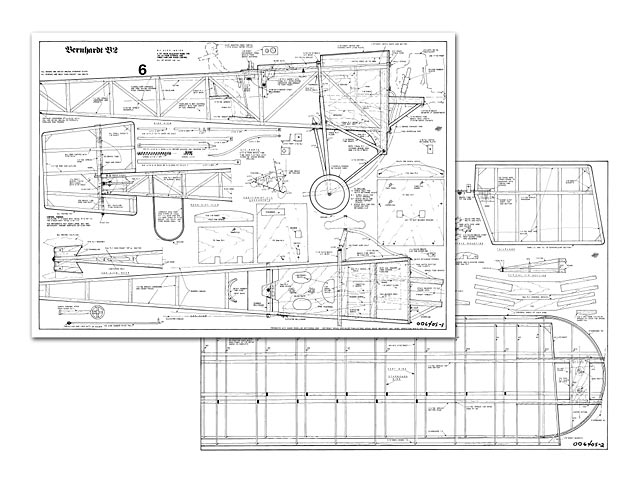 Quote: "The Bernhardt B2 dates back to the pre First World War era in Germany, when Kaiser Wilhelm II ruled supreme. In what is now the prosperous town of Dusseldorf, the call of aviation came to young Ludwig Bernhardt. Enthused by reports of the successes of the famous Louis Bleriot, Ludwig became determined not only to emulate the Frenchman's achievements, but, in true Germanic style, to better them...

At least that is the way it might have been if the model I built had been a scale one. In fact the Bernhardt B2 is a figment of my imagination, so let's take a look at the requirements I set myself when I started the design of the model Design criteria: There were a number of ideas I wanted to test, that I had never tried before.

The first was the use of dowels for the wing leading and trailing edges as these seemed to offer the benefits of high strength combined with a scale-looking profile.

The second was the use of an open uncovered structure between the two halves of the wing. Both these features would also act as a testbed for a true scale model of this vintage, over which I have been ruminating for some time.

The third was an open structure spruce fuselage. What a time saver! No covering or painting is required; just a couple of coats of fuel proofer.

Fourth was an operating suspension for the alighting gear, constructed from brass tube. I had read with great interest Richard Hawke's article in the third RCM&E Special "Radio Control Scale Aircraft" (the one with a Ruskin Air Services Dakota on the front, if you want to refer to it). I was convinced of the benefits, but concerned that I might be forever replacing bent brass tubes. Time has told, and I have had trouble-free operation from this apparently frail part of the aeroplane.

Lastly, I wanted to try all-moving tail surfaces. Here was an ideal chance to test them on a slow flying model. I also decided that the tail surfaces should be readily removeable, as it is much easier to cover them before they are attached to the fuselage.

All these five aims are incorporated in the aircraft, and none has given any problem in service.

The Bernhardt B2 was to be a simple design of pre-1914 vintage for three channel radio and my by then well worn OS 40 four-stroke motor. The former defined a large dihedral angle for rudder-only operation, whilst the latter demanded a modest all-up weight allied to a low wing loading. Having just written off my Albertine (Plan RM 273) due to a loose crystal in the transmitter, speed of construction also became a major consideration. The open structure fuselage, and the use of Solartex on all the flying surfaces certainlt speeded up the completion of the model..." 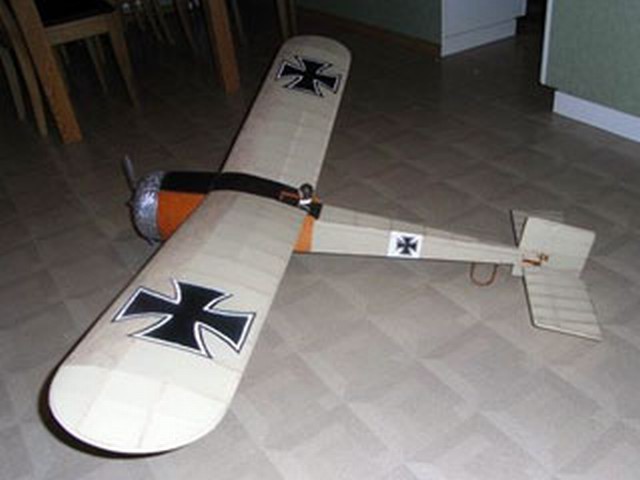 Model photo was found online at http://bole-modellflyg-klubb.webnode.se/news/byggtekniken-utvecklas-ifr%C3%A5n-deprom-modeller-till-balsa-modeller-ny-tankande-konvertering/, thanks to Pascal. Follow the link for more images.
Mary - 03/01/2018
There's a short video of a Bernhardt B2, 70" scale(ish) model 3 channel on youtube: https://www.youtube.com/watch?v=9vIdbr88csM. It ends rather abruptly! Again, thanks to Pascal for link.
Mary - 03/01/2018
Add a comment