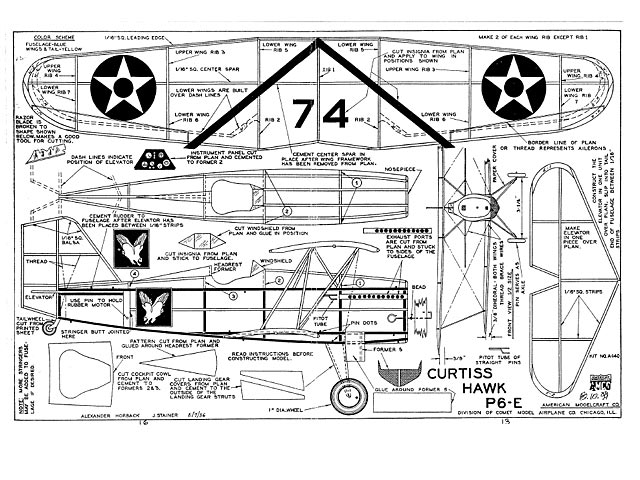 Scale pre-war US biplane fighter. Rubber model from Comet. Or more exactly, from American Modelcraft (referred to on the plan as 'a division of Comet'). Dime scale, 16in wingspan. 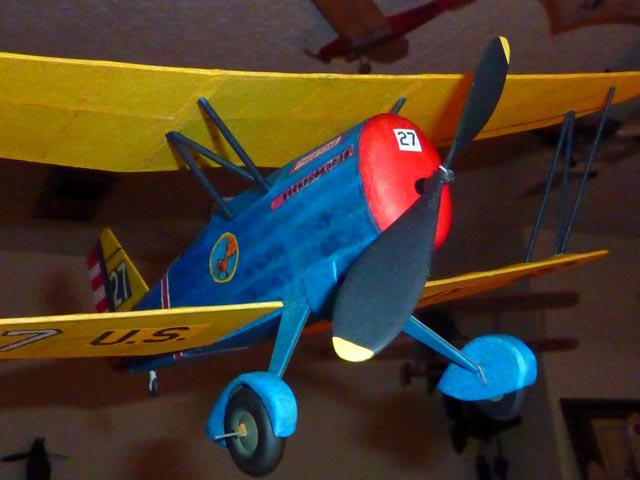 Many years ago in 1935 I bought and built a genuine Comet kit of the Hawk P6E. Last year we saw what was advertised as a Comet reproduction kit and sent for it. It contained this identical plan. Nothing like the one of 1935. Although experienced modellers we gave up in the end as the problems became more and more apparent in the design. Attachments of wing struts and landing gear to thin longerons without proper attachment points. Landing gear and wing struts without given dimensions. Wing ribs with undercamber below which the center spar projected thus preventing undersurface covering sensibly. Wing outline in 1/16th. sq. balsa with too few ribs that could not support struts or allow tissue to be shrunk. All in all it would dishearten new and inexperienced modellers."
RalphH - 02/06/2012
According to RalphH, this is a near-impossible build. Don't believe it. Modeling often requires a bit of ingenuity, some innovation on the builder's part...problem-solving. I've seen this model constructed twice, the first time by a colleague who chose to follow the plan verbatim. He did so successfully. This is my rendition [main pic, 003-006] with slight modification to suit my own tastes. Model represents No. 27, circa 1937, 33rd Pursuit Squadron, 8th Pursuit Group, United States Army Air Corps. Wheels are affixed temporarily...they are genuine Comet 1"dia. hardwood kit wheels...a bit heavy for flying. Very little paint was used...color scheme achieved via tissue. If I can construct this plan...so can you. Incidentally, this model first appeared in Comet's 1936 catalog. A version using a half-shell method appeared in their 1935 catalog at 15.5"ws...more expensive than the '36 dimer. As for the American Modelcraft Co. being a division of Comet...believe it.
Neal Green - 14/09/2021
Thanks Neal, have set the date on this one to 1936 now. Nice work on the model too :)
SteveWMD - 14/09/2021
Surely surprises can always appear. a plan is always the expression of the one who drew it. Understanding how it was thought out and designed is a constant question. The interest when making models is knowing how to adapt a construction so that the model is feasible. Sometimes the key or the click is missing to understand the process. The impossible no one is bound ;-). Everyone to experience the stroke of genius that is in him ;-) In any case, a great achievement as always ... We can't wait for the future ;-) Olivier
Olivier - 14/09/2021
Small question, I only saw chopsticks with a square section of one mm in poplar. Is this normal? Otherwise what diameter of rod can be used? 2 mm in balsa? Olivier
Olivier - 14/09/2021
Your ability to achieve beautiful results with "a near-impossible build" amply qualifies you as a master modeler, as do all the other creations with which you have delighted us. However, your statement "If I can construct this plan...so can you" tends to overlook the less than stellar capabilities of many of us. Nevertheless, kudos on this remarkable P-6E presentation.
Jan Novick - 14/09/2021
Thank you, Gentlemen…but still, you’re over-rating my modeling ability. A goodly portion of my working-life was spent as an engineer and I’d just like to reiterate that in all that time, never was there a design or contract that didn’t require modification. Such is the nature of “the beast.” I’m reminded of a television advertisement in which a very classy woman walks into an architect’s office, sets a water facet on his desk and says, “Design a penthouse around this.” In this instance an office manager sets a pair of hardwood wheels, a dozen foot long 1/16” lengths of balsa strip wood, a single small piece of balsa sheet wood and a prop blank in front of a young draftsman, “Design a Curtiss Hawk P-6E, 16” wingspan dimmer…standard parameters, 15% overhead and profit to include packaging and shipping. You have 5 work-days in which to complete this project.” As I was schooled early on…anyone can over design and over build. The real trick is to get the most for the least and still fully meet requirements. Remember, the retail price was one thin American dime…and so there may have been some ambiguities here and there. Thank you, Outerzone for these precious plans.
Neal - 15/09/2021
Olivier...you had a question concerning "chopsticks"...I'm not familiar with that part of an airplane. :) On the other hand...the cabanes and outer wing struts call for use of 1/16" balsa strip-wood on the plan. Of course balsa wood can have differing densities...would recommend a hard balsa. As for my own usage...I utilized 3/32" strip-wood rounded (actual aircraft used steel tubing). Strip-wood can be rounded by drawing through an appropriately sized metal nut fastener. I do like Asian food...speaking of chopsticks. :)
Neal - 15/09/2021
Thank you, in fact, the European measurements being in mm, it forces me to choose between two measurements in the measurements offered ... either 1 mm or 2 mm. Interesting the technique of transformation into a baguette. Too bad that bamboo cannot be found in these measures, hence the use of rattan ... sometimes. I would like in my list of planes to recreate the "plane of France" ... see the "notebooks of the cervia" for the peanut scale. ;-) Because the boxes found on ebay reach a prohibitive price ...
ps: the first time I ate Asian was in Croydon ... a long time ago. I had ordered without knowing what I was ordering ... ;-) Olivier
Olivier - 15/09/2021
Like this: http://www.peanut-scale.fr/cervia/74p1804.pdf and http://www.peanut-scale.fr/cervia/74p1815.pdf
Olivier - 15/09/2021
Add a comment