Quote: "The Sikorsky R-6 helicopter is historically important for several reasons. As a design it marked the beginning of a trend away from unlovely steeltube box structures, demonstrating that a helicopter could be beautiful as well as efficient. It was one of the first to be operationally fitted out as a flying ambulance - it could carry two external pods, each holding two stretchers on either side - and it took part in many early military experiments designed to test the utility and application of rotary wing craft.

The model R-6 follows in the historical tradition by introducing a new model helicopter rotor system, the 'multi-phase rotor' which permits use of true mechanical cyclic control in addition to the automatic cyclic and collective pitch normally used in models. The multi-phase rotor system is based on the idea that it is possible to build three distinct types of rotors which occupy the same space at the same time, so that the reactions of one rotor are modified by the others, etc. This is an extension of the co-axial system previously published in which one rotor was a rigid-feathering affair with the other a see-sawfeathering type, the interaction resulting in an automatically stable co-axial system. The multiphase system uses three rotor blades, each with a different characteristic dynamic reaction. Thus we include the desirable features of each blade type, while suppressing the undesirable reactions in the composite meld.

The reader should be cautioned that simply tossing together a number of different types of blades in one rotor is no guarantee that the good features will emerge and the bad features be suppressed - it can come out the other way around. Air Trails Model Annual '55 For example: A rigid, non-feathering blade produces a nose-up resultant in forward flight, it does not autorotate; a Clough-type tip weighted blade produces a nose-down resultant in forward flight, and it autorotates beautifully; an angled hinge blade will tend to adjust pitching motions, it autorotates fairly well, but it is very critical in adjustment. In the multi-phase system we use the rigid blade to counter the nose-down tendency of the feathering blade (as in the Berkeley model D). What does the angled hinge blade do?

On this particular model we wanted to use a manually set cyclic control, which flips the feathering blade to produce forward flight by mechanical cycling, as in full scale, rather than by induced or C.G. shift cycling as is generally done in models. But, if we use a fixed cyclic deflection on the feathering blade, in conjunction with a fixed pitch stabilizing blade, we discover that as the speed of the model increases in forward flight we have two cyclic forces: first, the fixed mechanical cycling which will always be the same, and second, the dynamic cycling caused by air pressure on the entering edge of the rotor disk. This induced cycling increases with forward speed at about the same rate as the nose-up cycling effect produced by the fixed pitch blade; therefore, if we add mechanical cycling to it we find that the model will accelerate and go into a dive. We could prevent this by using larger fixed blades operating at greater pitch—but this would spoil the autorotation.

So we add an angled hinge blade to the system. This will autorotate, and as forward speed increases the air pressure in front of the disk causes it to bend downward and increase its pitch on the advancing side, and bend upward and decrease its pitch on the retreating side. Now we can pre-set the rotor system with a fixed amount of cyclic deflection on the feathering blade and the model will accelerate up to the point where the induced reverse cycling of the anglehinge blade cancels out both the pre-set and induced cycling in the feathering blade and will go no faster. If air conditions, gusts, tend to speed up the model the rotor system increases it’s cycling momentarily to kill off the speed, then resumes normal operations. If, in calm air, we launch the model sharply nose down, it slides forward, slows down, then finds its own optimum speed, and proceeds at that rate.

When the power stops the model descends in autorotation, the rate of descent being governed by the fixed pitch blade, which acts as a governor upon the two automatic blades. This incidentally does not produce a wobbling descent, provided any reasonable autorotational speed is maintained - 90 rpm or a little better."

From Hobby Helpers plan #55A.

Update 24/12/2017: Replaced this plan with a slightly clearer version. This is the same 300 dpi scan as previous, but now I have flattened out some paper creases and fixed a couple of stitching and alignment issues. 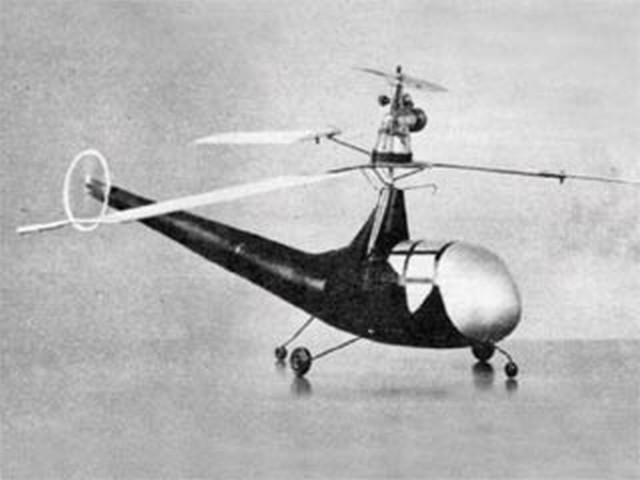 Nice plan but poorly scanned it would appear the Dpi was changed after it was scanned. (example have a plan scanned at 400 Dpi. Then open it on your PC in Potoshop As a Bitmap change the Resolution to setting say 600 Dpi. And boom jagged lines.
ken - 23/12/2017
Thanks, Ken. No, we don't ever resample images while they are in bitmap format. That would indeed be a bad thing. You can always read our tutorials pages for a longer explanation of our cleaning techniques used on incoming scans.
SteveWMD - 23/12/2017
Beautiful new scan JJ and thank you sir for the extra time spent on this one. And thanks as well for all the other plans you've shared with us here on the Zone. Please allow me to be the first to admit I check in daily to see what rare gems your going to surprise us with next.
Ken - 27/12/2017
Um thanks Ken. But it's the same scan, just cleaned up more, like I said in the update. JJ has only scanned this once (thanks JJ). There has only been one scan. The scan was at 300 dpi. Everything else you see here is post-processing. Both plan files you see here were derived from the same scan file. Hope that makes it more clear?
SteveWMD - 27/12/2017
Add a comment