Quote: "How to Build A Gas-powered Camera Model. Complete Information and Plans From Which You May Build a Plane That Will Take Aerial Photos Or Serve As an EfficientContest Model. By Elbert J Weathers.

HERE, Mr Gas Model Enthusiast, is a plane which has been thoroughly proven from several important angles. It is a ship of 8 foot wing span possessing the much sought after characteristics in present day gas models. As shown by past experience, it safely holds its own when being judged for construction, general design and clean lines in a precision contest. The takeoff is very even and graceful and the climb, with the engine wide open or fairly much so, is nothing short of spectacular, considering its size. It has been observed on many occasions 'going upstairs' at an angle approaching 30 to 35 degrees. The Grant X wing section and flying weight (with full equipment, 5 lbs) obviously have a lot of bearing oil this feature. On the other hand, the engine can be throttled way down, giving flights very similar to a Taylor Cub. Thus is the flexibility with it in flight. The glide is super-flat and soaring on the mildest thermal is common. Under gliding conditions, the forward speed is very slow, and when ready to finally land, it comes in as gentle as a kitten, with little or no bounce.

The writer's original job was designed to have a perfect glide with both the wing and stabilizer in a fixed position and each absolutely neutral, relative to the neutral line of thrust. In other words, the only adjustment that has ever been made to it has been that of the tab in the fin, to adjust it for the wide circling to the right, after the motor cuts. Should anyone, upon completion of the model, find that gliding adjustments are imperative (which is a remote possibility if plan are carefully followed), it is suggested that small sheet aluminum tabs be made and installed on the trailing edge of the stabilizer to compensate.

Each wing panel slides out of the center section after lock pins are removed and the tail surfaces detach likewise, as one unit, insuring maximum ease of transportation to the flying field.

The feature of being able to take aerial photos should prove of enough interest in itself to urge most gas modellers to try the model. It is probably the first gas model to obtain worthwhile aerial photos. A standard Univex Model 'A' camera is employed for this (very inexpensive, easy shutter action, and light weight) and makes surprisingly clear exposures considering the lens and flying speed (under power) of the model at the time of shutter action. When installed as shown, the left wing panel of the ship is included in the upper portion of each 'shot,' adding to the realism. This is clearly shown in the aerial pictures included in the article. The possibilities of taking photos from the air of gas model contests as your entry is flying overhead might also be mentioned in this connection.

Fuselage: First lay out all parts of the plane, full size, by enlarging from the assembly drawing, making use of all dimensions as given. Show location of all vertical or diagonal members as well as spars, formers, etc, on your working layouts.

Begin the model by first constructing the fuselage. Make two side frames to begin the fuselage. (Shown in shaded lines.) The longerons are 5/16 sq and should be of hard balsa. Use firm balsa for all bracing. Secure longeron stock in one length if possible, so as to avoid splicing. However, if this has to be done, merely make a long tapered splice with balsa sheet bracing on the two inner sides of the longeron. It will be necessary to steam the lower longerons at the nose in building the frames. Do not forget the removable door frame which is shade at the same time, where shown, in the frame to be on the left side. When both are dry and sanded smooth on their outer sides, build them together in the usual manner, pinning each upside down on the work-bench. For clarity, no diagonal bracing has been shown on the top and bottom of the fuselage frame. This is to be 1/8 sq balsa, installed from, the wing mounting block to the rear end of the frame. See photograph showing this part completed.

The next step is to build up the top, rear section of the fuselage, from the cabin back. Start it by constructing the sheet balsa covered 'box' upon which the rear part of the center wing section is to be attached. Install four corner uprights of 3/16 sq, followed by the filling in of all sides (except the bottom) with 1/8 sheet balsa fillers. This must be very firmly attached to the fuselage. Cut two 1/4 sq hard longerons and install them as indicated. Complete the top rear section by putting in all the vertical bracing, which drops down from these longerons to the exact vertical spot on the fuselage frame, be it on a cross-brace, main longeron, or both.

Cut from 1/4 sheet balsa of firm grade the rear anchorage for the motor beams. Install it in the frame so as to receive the hardwood motor beams when ready. Install two lengths of extra hard balsa..." 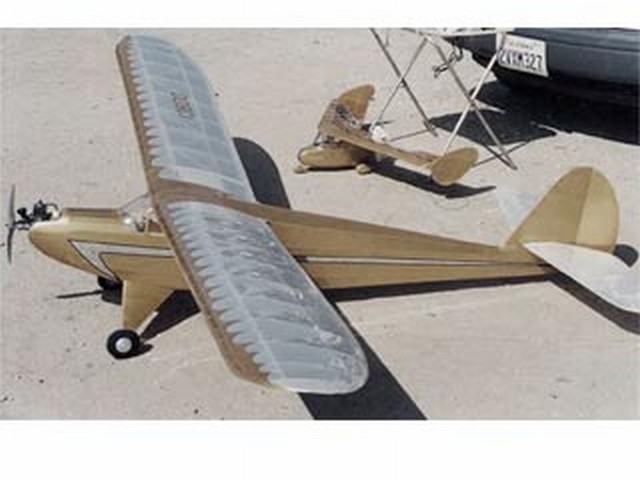