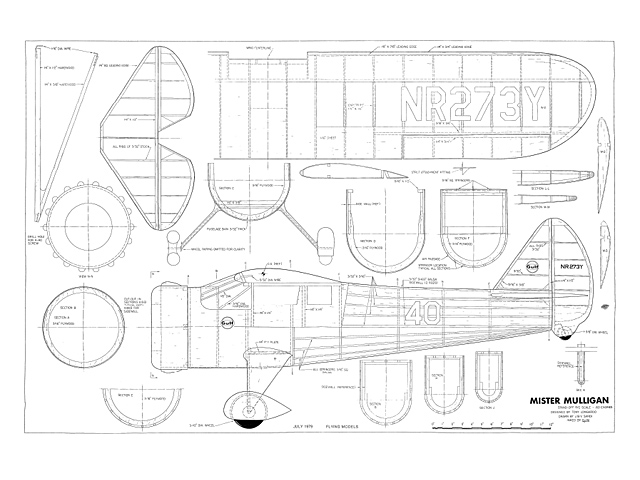 Construction: The fabrication techniques used to construct this model are fairly common and straightforward. We will not go into extensive detail - it is assumed that the builder is a modeller with reasonable experience. As with all aircraft, try to keep the weight to a minimum.

The Fuselage: Cut out all formers from the specified ma-terials. Slice the full length sides from 3/32 balsa, ensuring that the left and right are identical and that the wing saddle and stab platform are parallel to the full length straight edge corresponding to the thrust line. Mark off the location of all formers on the inside surface of the sides and use a square against the straight edge to draw perpendicular lines at these locations. Cement 3/16 x 1/4 stiffeners at the former locations from F through J and 1/4 sq stiffeners at the cabin locations as shown on the plan.

Following this, cement 5/16 x 1/2 in balsa wing saddle and 3/32 sheet stiffeners and gussets at the stab platform location. A length of' 1/4 x 3/8 balsa should also be cemented to one of the sides at the aft end. Join the sides between C and F using these formers and 1/4 x 1/2 in balsa cross bracing at the top, making sure that the formers are square to both sides.

Lay this assembly over a straight line, centering F and C on the line and cement the aft end together in a way that it is accurately centered on the line. Install formers D, E, G, H and J retaining the symmetry of the sides at each location. Cement 3/16 sq cross bracing at stations G, H and J. Now cement formers A and B between the sides. Be careful not to twist the sides when bending the 3/32 sheet over the curved region of these formers. Cement the 1/4 in plywood landing gear plate and wing hold-down plate between the sides. Use plenty of epoxy! Following this, cement the 3/32 balsa outer skin doubler over the sides from A to just aft of F as shown.

Install the landing gear wire at this time using J-bolts fastened to the landing gear plate and former C. Sheet the under belly from section A to D. Trial fit the fuel tank, drill all holes for fuel lines, throttle and en-gine mount in former A and install the rud-der and elevator pushrods. Sheet the top be-tween A and B install 3/32 x 3/16 stringers over the aft end of the fuselage.

The cowling was formed using a 1 in balsa block and 1/8 balsa ring cut in a circular pattern and separated every 45 degrees with lengths of 1/8 x 1/2 balsa. This assembly is then sheeted with 3/32 balsa, shaped and covered with fiberglass. The aft ring may then be cut out. Small hardwood blocks with wood screws hold the cowling on at four locations. The eighteen manifold blister fairings are formed of shaped balsa cemented to the cowling at 20 degree increments.

Wing Structure: The flat bottomed airfoil deviates from scale (an NACA 2412 was used on the actual aircraft) but makes the wing assembly on a flat surface close to foolproof. Since there is no dihedral, the entire wing can be built at one time. Wing tips are cut from 1/2 in sheet. The ailerons can be cut out after the entire wing has been built, but be sure to install linkages before sheeting. The strut fittings are nothing more than nylon aileron torque rod retainers... 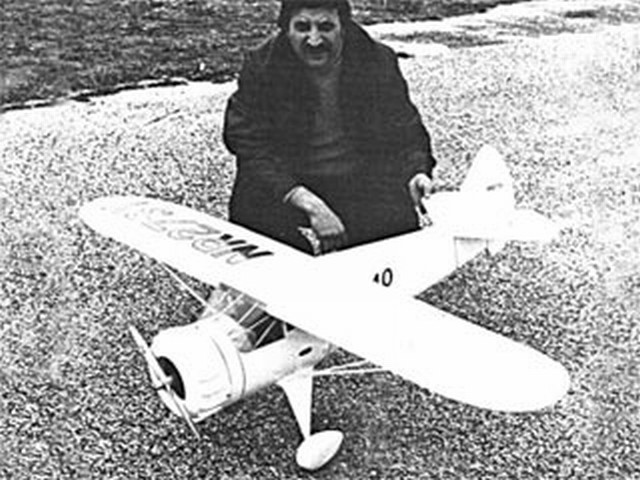