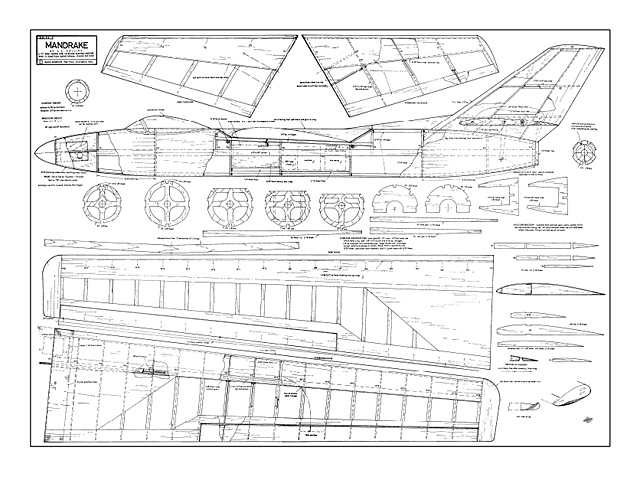 Quote: "THE ORIGINAL Mandrake dates back some twelve years, and was a semi-scale model based on the Russian YAK high-altitude reconnaissance aircraft. This aircraft was a modification of the Yak 25 Firebar [Yak-25RV], and was allocated the NATO codename of 'Mandrake'. This 65in span model, of which two versions were built, was powered by a 2.5cc diesel and was controlled by four-channel reed equipment on aileron and elevator.

In 1977 I became interested in electric powered flight, and started looking for a suitable design. The Mandrake, with its powered-glider configuration appeared to have possibilities. The plan was redrawn, with a longer span, less sharply tapered wing, an all-moving tailplane, and built-up instead of sheet tail surfaces. The tandem-style undercarriage was eliminated as a weight-saver.

The first flight was approached with considerable misgivings, as the weight of 54 ounces seemed far too much for the Cyclone motor fitted. However, noise and efficiency are apparently not related, and a steady climb away from a hand launch, followed by some mild aerobatics established that the basic design was right, although the roll rate was modest.

This model was followed a year later by the Mark 2. Changes to the design included a thinner wing section (flat-bottomed Eppler 387) to give a cleaner line to the top of the fuselage, larger ailerons, and as an experiment a glassfibre fuselage. This was a single lamination of 175 gm/sq.m glass cloth, and even with the internal formers and crutch system of the Mark 1 retained, was the same overall weight.

The Mark 3 version uses a single layer of 300gm/sq.m glass mat which, although heavier, is much stiffer and has allowed some reduction in internal structure. The Mark 2 met an embarrassing end by folding its wings in the rather turbulent conditions at the Radio Modeller 1978 Electric fly-in. A stronger dihedral brace, and the substitution of spruce for the spar material has cured the problem, and the wing structure should give no cause for concern.

The plan shows the conventional balsa fuselage construction, which, unless you fly off extremely rough terrain, should be entirely adequate. A useful feature if you do happen to damage the fuselage, is that the building jig can be slipped back in place, new formers threaded on and some fresh sheet covering applied with no fear of warping or distorting the fuselage.

Construction of the fuselage is quite straightforward, if a little unusual. All the formers are cut out and carefully drilled on the centre line to suit the jig used. This jig may be of any material, as long as it it stiff enough to resist bending whilst the sheeting is being applied. On the first prototype I used 12mm square obeche, and for the glassfibre versions a length of 6.5mm diameter aluminium rod..."

Note: for a modernised version of this plan, see Mandrake Mk4 (oz9810) 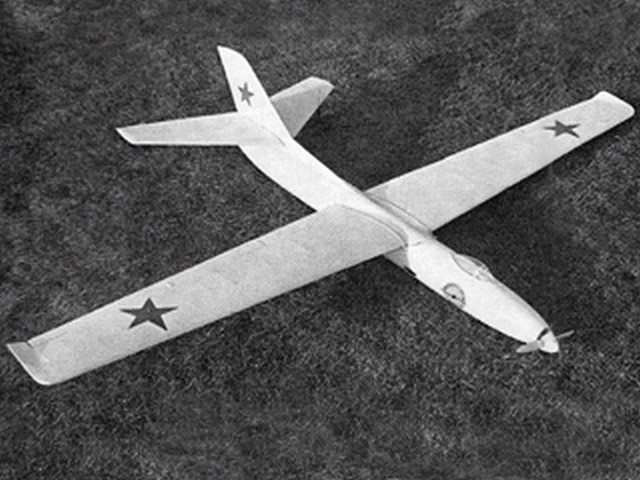