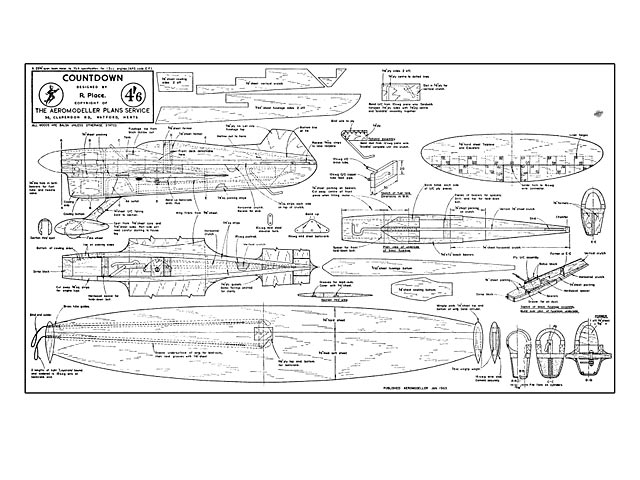 Quote: "Most successful 1/2A Team Racer to date. Designed by Dick Place

1.5cc TEAM RACING standards have improved so rapidly over the past 18 months it seems hardly creditable that their performances match that of earlier 2.5cc models in the same size airframes. Undoubtedly, the most successful, and one of the best looking to date is Dick Place's Countdown and it is with special pleasure that we introduce this as the first genuine Team Race design to Aeromodeller Plans Service (as distinct from Class A conversions).

Fuel that has been used all season with the exception of the Woodford rally is: 35% Ether, 35% Paraffin, 20% Castrol M, 7-1/2% Heptane and 2-1/2% Amyl Nitrate. This, together with a 6 x 9 Stant prop, which has been thinned and balanced, will get through a heat with only one pit stop - ie 45 laps/tank at least and gives an air speed of around 80 mph.

The only other props tried are Stant. 6 x 8 and Tornado Plasticote 6 x 8, both of which gave better acceleration, but the top speed was slightly down and the laps dropped below 45, which would have meant extra pit stops. In the light of 1961 seasons flying, it is obviously better to keep a 9in. pitch prop and trim the diameter to 5-3/4in or 5-1/2in consistent with obtaining at least 45 laps if one cannot obtain the speed on a full 6 x 9 propeller.

Start construction by assembling the engine bearers, crutch and U/C box, using Araldite. Drill the bearers, fit engine complete with spinner, after preparing 'flats' on fins and carve bearers away to follow the contours of the spinner. Cut out the wing and sand roughly to shape, leaving fuselage area flat, then make up bellcrank assembly with flexible lead out wires..." 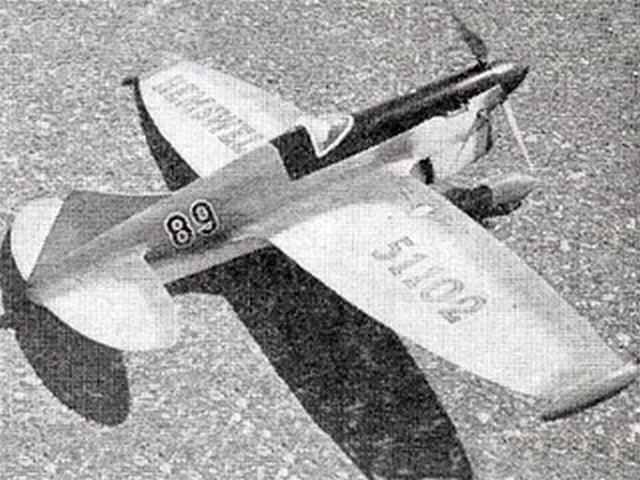