Quote: "I have long believed that there exists in the R/C model world a dearth of 'in between' aircraft that the near novice can use as stepping stones towards a fully fledged aerobatic model. Plenty of basic trainers exist and equally plenty of aerobatic models, and pylon racers etc - but little in between. Conversations held with a wide range of modellers from all over the country tend to support this view and recently several kits have been introduced on to the market in an attempt to bridge the gap with mixed results. Much work, I feel, is still needed in this area. This was the thinking which led to the design of the Bootlace; to produce a genuine transitional airframe having the following features:
1. Relatively simple to build
2. Easy to fly on either three or four functions
3. Capable of all basic aerobatics when sensitivity is increased
4. Attractive to look at.
Now I know that beauty is in the eye of the beholder and that appearance is rated only at No. 4, but most of us would agree that the modeller at the near novice stage would prefer attractive lines to functional appearance. I cannot accept that trainers need to be boxy and that aesthetic lines cannot be part of the design. Similarly most of us accept that the 'average' pylon racer presents an attractive picture. Accordingly the image of the racing aircraft was much in my mind when sketching in the preliminary shapes.
Much of the constructional techniques used were borrowed from other well known designers and readers will notice the Boddington influence in much of the fuselage structure.
Flying on three functions presents no problems (leaving out either the rudder control or aileron control) in fact with increased dihedral and a 0.19 cu. in. motor one suspects that it may even fly single channel. By increasing control sensitivity, all the fundamental aerobatic manoeuvres became possible. Rolls, loops, stall turns, inverted flights and spins all come easy to the Bootlace. With a little down trim fed in, hands off inverted flight is possible.
Two prototypes were built, one by me and one by fellow club member Brian Elliott. Brian built from my original draw-ing (as presented here! ! ! ) to prove that the flight characteristics were not a fluke and to endeavour to spot any mistakes on the drawing. To my surprise, no errors were found and the second model proved to be as near identical in performance as could be judged. Both models were powered by 0.35 cu in motors, Brian's a near new O.S. and mine an aged and near retirement Merco. Again both models featured a veneer covered, foam-cored wing, built for us by that 'laugh a minute double act' Big John Miller and Peter Gardner from Aviette kits (more of which anon). Traditional wing structure is, however, shown on the drawing and poses no problems in its construction. Wherever possible each part is individually drawn and detailed to avoid confusion and our hypothetical near novice should encounter no difficulty over the construction but a brief guide is offered here as further aid..." 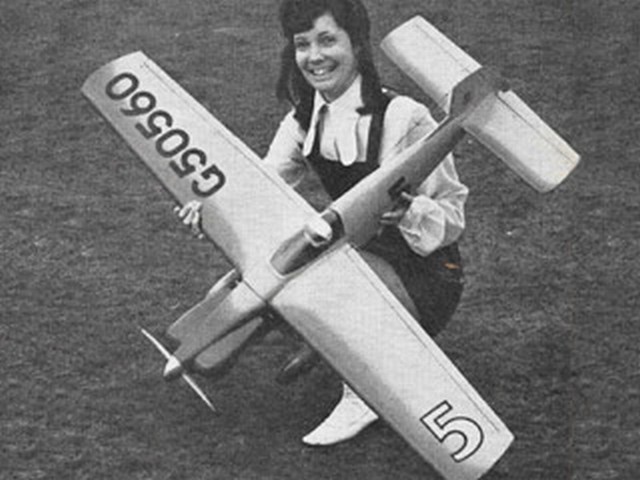