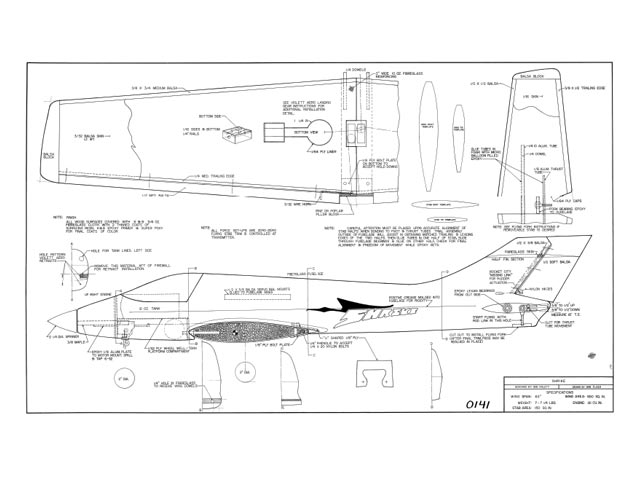 Quote: "Designing a model aircraft is a super challenge. To draft on paper and then transform into balsa, foam and fiber-glass what one envisions is perhaps a model builder's fantasy portrayed. Certainly you have a dream machine that you secretly think about and picture zinging past an enthusiastic crowd admiring your genius. The Shrike is mine. This design represents an effort towards an aerobatic craft that has a little extra something in style and a few innovations.

It did not evolve from a long line of prototype airplanes. As a matter of fact, I've only designed and built two such airplanes previously: One is called the Virginian, and a modification of that is called Scorpio. They were little known outside the local area. Only the wing section of the Shrike bears any resemblance to these former aircraft.

So Shrike just happened one day at the drafting table. I'm in favor of stealing good ideas and improving on them. And if someone thinks that the profile looks kind of like Tony Bonnetti's machine, I'm proud because I always did admire and remember the image of that fine aircraft. The canopy and nose section is sort of Super Star, so it's terribly difficult to be original these days. Pattern aircraft have just been around too long.

My competitive work in pattern flying has for the most part been con-fined to local area meets. Therefore, I'm no expert in this field. Next to pylon racing, the most fun I've had flying these toys has been attempts at formation flying with Jim Martin and his Banshee. We've worked at this enough to realize that it could be done quite professionally. It is certainly an airshow crowd pleaser, far better than pattern and possibly as good as racing.

One of the obvious design features of the Shrike is the low thrust line with the wing centerline just below and the stab just above. This simulates the good flying characteristics of a mid-wing airplane without the additional belly pan. The molded lip on the front of the wing saddle provides a solid wing mount and saves you from making the usual balsa fairing. The thick fin provides smoothness about the vertical axis as well as good rudder response. This is because it presents an airfoil to the relative wind instead of the usual thin slab. Sweeping the hinge line of the rudder doesn't seem to produce any noticeable elevator effect. The slow rolls are a thing of beauty and the figure M is surprisingly easy to accomplish.

Perhaps the flying stab is the Shrike's most controversial feature. An airplane operating with a flying stab has several aerodynamic advantages since the tail plane is actually flying through its various angle of attack changes instead of acting as a deflection and drag device... " 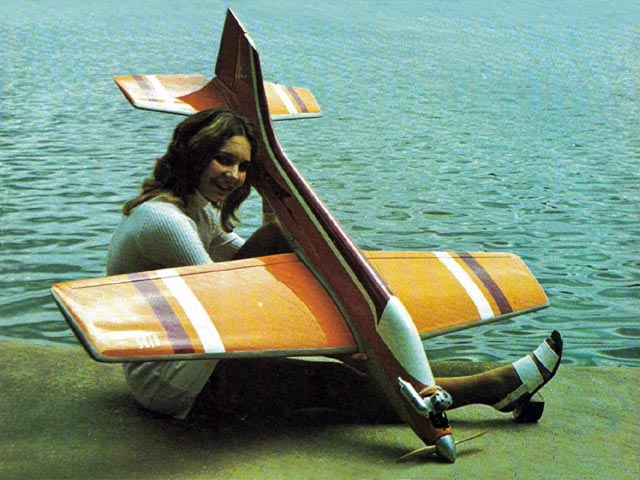 The fiberglass fuselage is available from https://www.rcmissouri.com/ballistic-aircraft-co.html I purchased a fuselage from him a couple of years ago.
JimPurcha - 17/04/2018
Add a comment