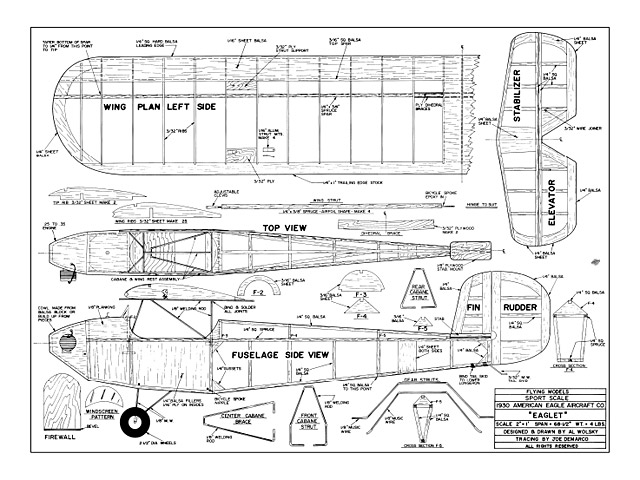 Quote: "R/C Sport Scale American Eagle 'Eaglet' By Al Wolsky. An obscure aircraft from the days of the depression provides the basis for a nifty three channel fun scaler for .35 power.

Records show that 215 aircraft companies were in business in 1930. With the great American Depression in progress at the time, the number fell to a low of 110 by the end of 1931. It was during this 2 year period that a record number of new designs appeared on the market. All the companies had one thought in mind and that was try to survive. To do so, small light sport type airplanes seemed the answer. Most were two place designs powered by air cooled engines with 2,3,4, and 5 cylinders, of 25 to 45 hp.

One such sport light plane that came on the scene in November of 1930 was the American Eagle 'Eaglet', manufactured by the American Eagle Aircraft Company, located at Fairfax Airport in Kansas City, Missouri. The first Eaglet was powered by a Cleone two cylinder opposed engine of 25 hp. This model was limited to a pilot only, but on occasion carried a passenger. High hopes on this version, with its low cost of $995 soon proved that it had limitations due to the engine size. The company next installed the three cylinder Szekely engine of 45 hp which proved to be what the Eaglet needed. It was with the Szekely that some 80 or more Eaglets were manufactured before the company ceased production. Price at the factory was $1,575 in 1931.

The model faithfully follows the outlines of the real plane, although if one studies photos of the various models, changes can be seen in nose shapes and also fin and rudder shapes. The model is scaled to 2in = 1 ft, which results in a large sized model needing an engine no larger than a .35 for power. The model is not too difficult to build, although care must be taken in bending and mounting the wing cabane struts. The fuselage shape is another area that is a little unusual. It is rectangular in shape to a point just behind the cockpit area, at this point it takes on a sort of diamond in shape. Cross section views at F-4 and F-5 will assist you in construction.

In building the fuselage you will need three 1/4in sq hardwood pieces. Either spruce or pine will do. Make two sides using the hard-wood for the top longerons, which extend to the tail post..." 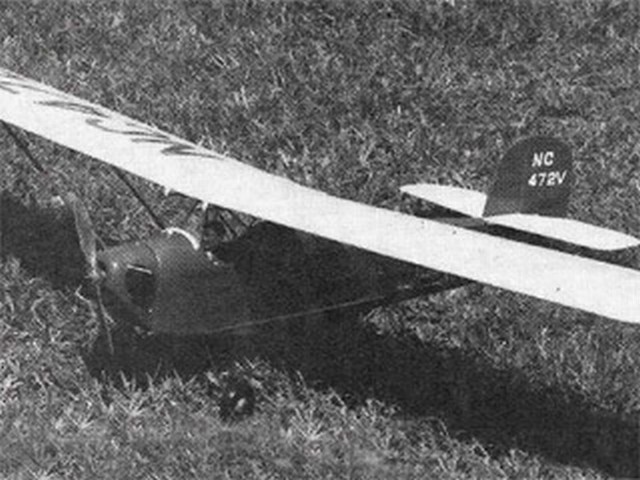