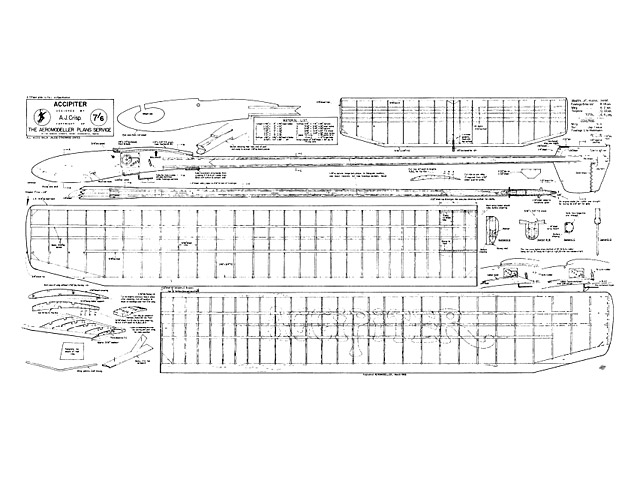 Quote: "Andrew Crisp's ACCIPITER - A/2 specification glider of simple lines and high performance features.
THE STORY of this model goes right back to the German glider published on page 23 of the 1952 Aeromodeller Annual, Karl Heinz Denzin's 2nd placer in the 1953 World Champs. was also an influence. Several A/1s made during the '50s convinced me of the good towing characteristics of the 'pod and boom' layout.
Then I became involved in power flying until 1961 when I obtained a German 'Helios' kit. This I modified by slimming the fuselage right down a la ‘Spinne', and using an under-fin. From time to time, people claim that these are bad and cause spiral instability, but I feel this is due more to warps than fin position.
Two versions of this model were made, and lasted for ages, being very reliable both on tow and in flight. I suppose it was rather like an A/2 version of the old Pelican, which can't be bad!
In an effort to increase 'still air' time, a new model was built with much greater span at 82in and smaller tail at 68 sq. in. A Hank Cole airfoil was used, and it appeared capable of around 2:25 on a calm evening. Wing warps are used for trim; thus the ship flies on straight rudder for glide and offset for the tow. Despite having a long nose (8in) stall recovery was instant due to a heavily under-cambered and very light tail which weighed .2 oz.
Hoping to increase the unassisted time still further, the first Accipiter was made. This was 86-1/2in span, the wing being covered in sheet. Twenty flights made on late summer evenings ranged from 2:30 to 2:45 so the object of the new model had been achieved. Unfortunately, when flying in quite a mild wind the wing folded, so this was discarded as being impracticable.
This now brings us to the present 'Accipiter' which I think would need a force eight gale of wind before the V wing breaks! It is best to make the flying surfaces first so that they can age while the rest is made. Wing: Start with the trailing edge first. Pin down flat on the plan, and glue the joint for the tapered tip. Remember to make opposite sides! Remove from the plan and notch to receive ribs...." 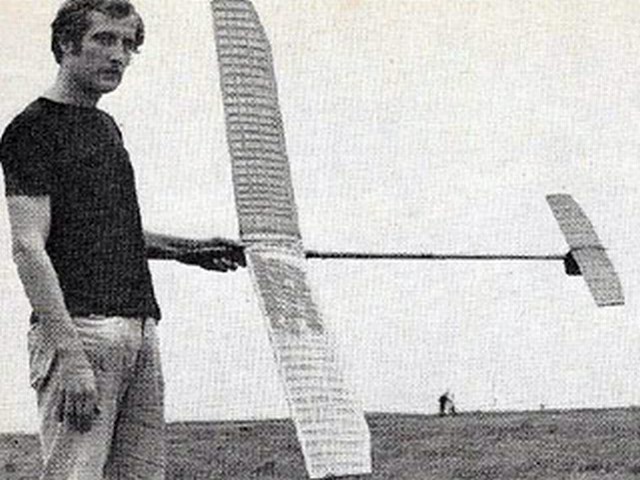