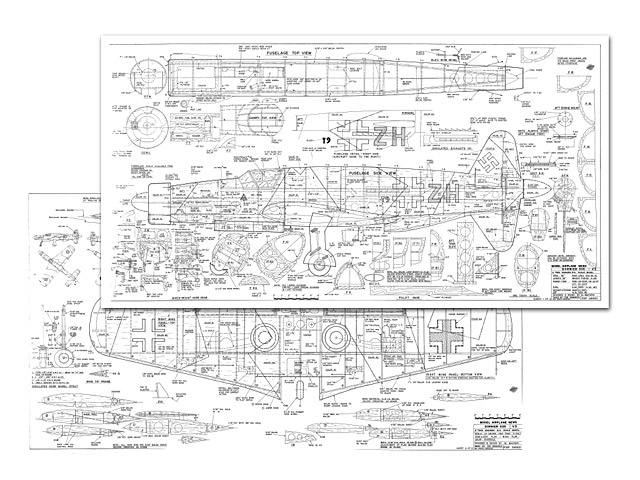 Quote: "IT WAS IN May '62, as I perused a pile of aviation magazines, that I read about a little-known WWII German aircraft. The article described a unique inline-engine aircraft with engines mounted in a push/pull configuration; it was reportedly the fastest propeller-driven aircraft developed during the war. The war ended before the many versions of this spectacular fighter/bomber could he made operational. It was the Dornier-335 Arrow.

What an R/C scale model it would make! I addressed a letter to Dornier-Werke in Friedriehshafen, Germany, requesting scale drawing and information that would enable me to design an R/C scale model of the Do-335, in hopes that my inquiry would cross the desk of a sympathetic reader, or even a fellow modeler...

It was an exciting moment when, after after three long weeks. I received a large envelope from Germany! Inside were scale three-view drawings, fuselage sections, airfoils and data on wing washout. To top it off, black and white photos of the Do-335 were included. Bingo. The photos were of the V3, the third prototype aircraft, which was devoid of the armament and landing lights that were included on later versions. A close study of the photos with a magnifying glass revealed that the swastikas had been removed by postwar German censors. Powered by two K&B. 45s and sporting handmade electric retracts, my 70-inch, 'is-scale Do-335 flew that year.

Since I built that model, excellent, scale, three-view drawings have been published, as have detailed booklets covering the many modifications of the full-scale aircraft. For those who are interested, documentation sources are listed at the end of this article. The abundant fin and rudder area provides excellent rudder response, but the cuneiform tail section does have some negative attributes! The full-scale Do-335 was equipped with a rugged, hydraulic, shock-absorbing tail-bumper system, and the whole lower fin and rudder could be jettisoned with explosive bolts if a gear-up landing was anticipated. Should the pilot elect to eject, explosive bolts could also he called upon to separate the aft propeller from the airplane, thereby saving the pilot from passing through the propeller. As of this writing, I've built and flown four 1/10 scale renditions...

The model requires some degree of construction expertise, but it has been designed for builder/ fliers who would like to scratch-build a unique, twin-engine scale model that doesn't have the inherent problems associated with twins. An additional benefit is that you can fit this 56-inch span model into a medium size station wagon without having to dismantle it!" 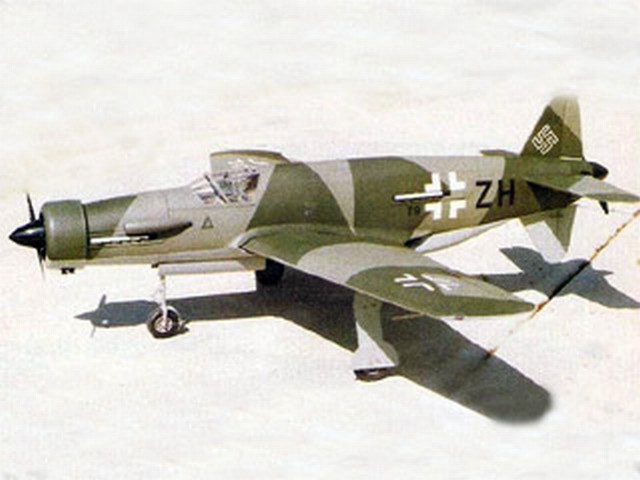 Despite Mr Master's claims to accessing 'Factory' drawings, the scale rendition of this plan is simply not very accurate, surprisingly so actually.
anon - 16/02/2018
Well sir, that's a pretty brutal attack on Mr. Masters accuracy. You took the swipe then you ran for the door and left nothing to back up your statement. It looks to me (as unknowledgeable of this aircraft as I am) that Mr. Masters has provided multiple sources for the builder to decide for his or her self if this creation is actually "scale" or as stated in the write-up by Steve and Mary that this is a "stand-off-scale" plan. I don't know which it is nor do I care, I will never build this model as it far exceeds my skill set and most likely yours also. If you have something that will prove your remarks lets have it, if not, try to refrain from tickling the keyboard with so much vitriol and oh yes, don't be so ANON. Have a blessed day today sir, and many more going forward.
LeeRandall_K5AIR - 18/02/2018
I purchased a set of these plans from Model Airplane News, some-time late 1992? Being very busy at the time, set them aside until about a month ago. Most of the parts are now cut out and I've just begun assy. Yes, this is a very complicated set of plans do to the DO335 being a complicated plane. I find the plans to be accurate and clear and I'm looking forward to working on it for a few months. (More than likely the whole year)
Dave Hackenberg - 04/01/2022
Add a comment