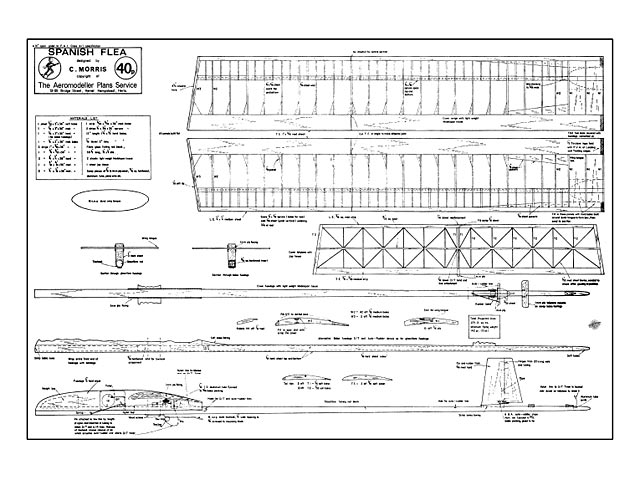 Quote: "Colin Morris's SPANISH FLEA, a rugged, high performance A/1 glider... Spanish Flea was the author's final attempt to build an A/1 that towed well, having vowed to give up A/1s for good if it did not! Evidently he succeeded, as the model's many contest successes since 1966 confirm, and it is clear that he has hit on the right combination of all those variable factors that no amount of theorising seems to resolve, what the Americans call 'eyeball engineering'.

This is quite a simple model to build for someone who has already built a couple of similar designs. However, there are some variations from orthodox building methods, which though not difficult, do take a little longer. These result in a model which is far more durable than normal - a valuable factor with a competition model. Very early in its career, the original spent three months in a garden near Chobham Common, and apart from a badly warped tail-plane (hence its now being geodetic) and a timer full of insects, it towed just as well as before, so the slightly longer building process is well worth the effort.

The plan shows two different types of fuselage construction, one using a hollow glass-fibre fishing rod blank, and the other a simplified structure of 1/16in sheet balsa. The balsa version is cheaper, and possibly quicker to make, but of course there is the very real risk that sooner or later it will get broken - most likely after the third max!

The fuselage nose 'pod' is cut from medium hard 1/2in sheet, leaving a bit of spare wood at the top to carve to the correct contour when the wings are fitted. There is plenty of depth for the timer without opening out both sides of the nose. The underside is cut along its length..." 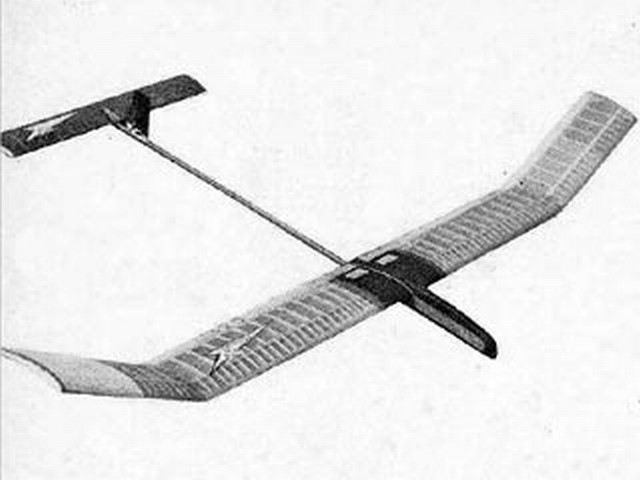