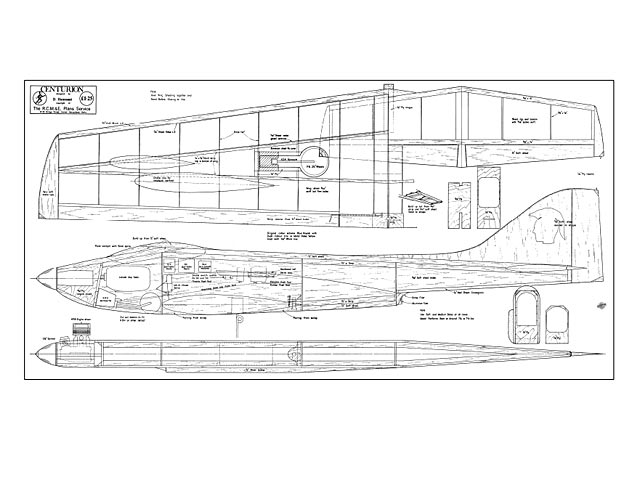 Quote: "Using once again the basic Spectre (oz9517) layout ... I swept the wings back a little, fish shaped the fuselage to be in keeping with continental trends, and so the jet-like Centurion was born. This model incorporated retractable undercarriage, at that time a complicated extra. On this occasion, it really did fly straight off the drawing board, so well in fact that it took top honours at the 1970 British Championships, but like all good models, it eventually wore out. So two more Warriors were built with identical layouts with the exception of fuselage profiles.
I suppose my desire to build this Centurion Mark 2, with the jet-type ap-pearance inlets, outlets, etc., was that I wanted something different to look at in the air. So although as I previously stated, the development from the King Spectre to the present-day Centurion Mark 2 was a natural development in-spired only by changing trends and weather conditions. The ability for the plane to perform the aerobatic schedule was kept in mind at all times.
My own approach to the schedule is fairly basic, for example with the size of model I usually fly, a weight of around 8lb is preferable and for this a good reliable power house is essential. Believe me there is nothing worse than trying to drag a model through the aerobatic schedule in front of a set of judges and a public crowd with the engine spluttering and sagging at the top of a loop.
The first Centurions were powered by HP 61 engines, which performed very well, in fact an HP 61 went a long way to helping me win the Nationals in 1970. Recently I have been using Veco 61's with the Perry carburettor; I must admit that this engine was put in the model straight out of the box and has never been touched since, it gives rue ample power in the climb and idles for ages without cutting. Getting back to the model though, I like mine to have a neutral trim, so that the plane will not fly in a straight line for very long without needing a signal from me. All this jazz about a model flying hands off is best left to slope soarers. For obvious reasons an acrobatic model does not want to be too stable, other-wise you will find it difficult to stall and spin. But on the other hand, you do not want a vicious snappy model especially when you're stretching the landings out.
Construction is typical of aerobatic R/C models, so I don't think full details of the method is necessary but I would like to mention a few points. For those of you, like me with limited time for building, foam wings and tail are made by a number of manufacturers. I have used them now for a number of years with great satisfaction, from personal use I can recommend the ones made by True-Line, these are both light and strong (my mid-air collision proved the latter). If you wish to build your own, then I have supplied the root and tip rib templates for sandwich type construction... " 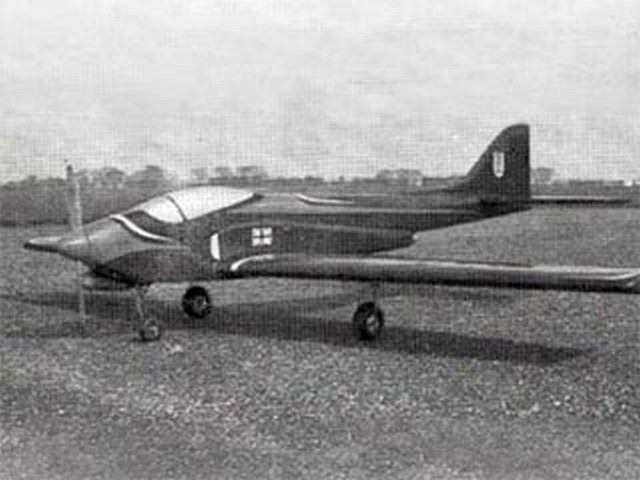