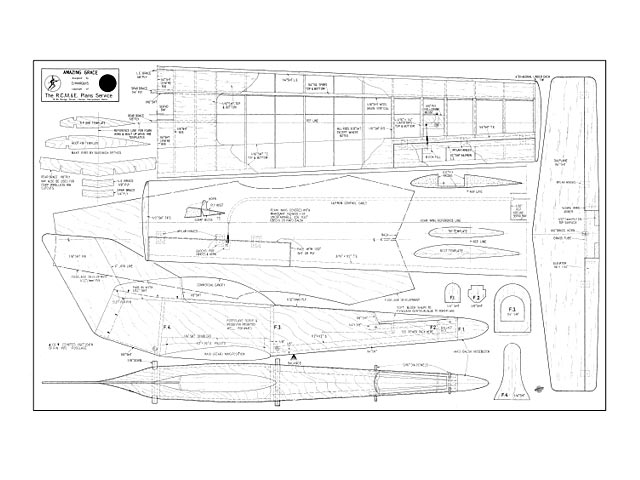 Quote: "Over the years I have run soaring events for my club and some of the members have designed planes specifically for these contests. One of the popular events was pylon racing and l wondered how I might improve my chances. Would a canard be fast and would it have any advantage over conventional models? The only way to find out is to take the task in hand and try it out, so away we go.

My only golden rule in design is, make it big enough to give yourself a chance, so with pencil in hand I started. But where do we look for data? Very little information seemed to be available at the time and most of that was for free flight models, so it looked as if once the basic aeroplane parts were designed, the different parts would probably need some experimentation. That must have been the biggest understatement since Columbus bumped into America and said I think I've discovered something.

In RCME October 1973 a photograph of 'Amazing Grace' was published showing it almost as it is now, except that it clearly showed an all flying foreplane, knock of it said, and lifting section, it didn't say. The object was to find out if anyone else was working on these models for R/C and if the information could be shared amongst readers. I am pleased to read even now, through various columns, the data that is being presented on such a little known type of model, as the self induced problems make it quite different from free flight. With Amazing Grace Mk1, I quickly found out that although the plane would fly, it would not fly as well as I would have liked and was at times unpredictable.

Having made a good launch, which was always achieved with some up trim for safety, it would fly quite stably but when the speed increased to about 40 mph in a shallow dive, the nose would tuck almost every time... I must mention that at this time the CG was established about 1in forward of the main wing leading edge. Different foreplane sections were tried and the best by far was found to be a neutral section. The lifting sections seemed to alter the CG considerably and I imagine the differing speeds in flight also contributed here, so aggravating the problem.

Another problem was that of achieving delicate control of the all flying foreplane as only a minimum of movement was required. This was brought about by using a bell-crank but unfortunately the slackness in the system was a bit too much, and it had to be discarded finally. This slackness incidentally, had its effect to a marked degree only in the down-ward direction and the suddenness and speed of its happening had to be experienced to be believed.

All this turned the design slowly towards a fixed foreplane of flat plate section with elevators at the trailing edge. The idea of using an all-flying foreplane obviously gets one out of the problem of designing the angle of incidence and it is quickly found by trim adjustment while flying. The flat plate section was methodically adjusted until an angle of 40 was found to be satisfactory. A look in the 1949 Aeromodeller Annual confirms this, so why did I bother experimenting? Simple, it didn't say it was for a canard foreplane so it might have been different and anyway you don't know for sure until you try for yourself.

The CG was moved out to 2in ahead of the main wing leading edge and since I have not met with any problems, it has remained at that setting. I am slightly disappointed that the original, knock-off all-flying assembly is not retained, but I am now able to fly the model in appalling weather if necessary and it is very stable and safe. Let's now have a look at the simple construction, not quite as much balsa in this as is usual but then it isn't the usual kind of slope soarer..."

Update 29/01/2020: Replaced this plan with a clearer copy, scanned from fullsize. Scan from KaoruKiyose, cleanup by Circlip. 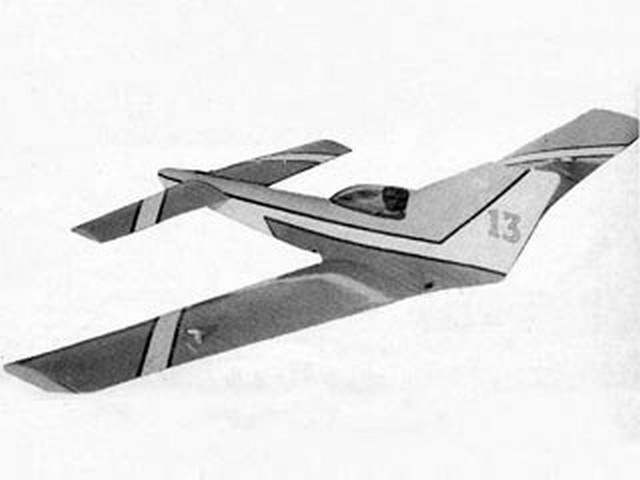