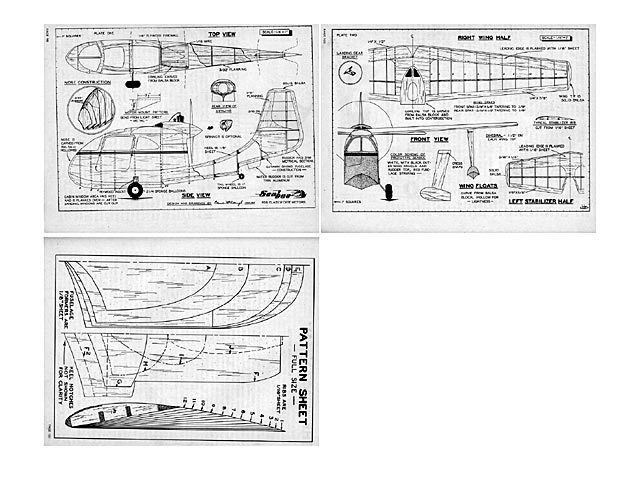 Quote: "Republic's trim little 'Seabee' not only provided the public with an amphibian in the lower price brackets. but gave an opportunity for a model version calculated to gladdend the heart of the most insensitive balsa butcher. The author's ship was designed in Italy where enough material was finally accumulated to start building it. The framework was completed in southern France and a model shop in Marseilles provided enough 3/32 balsa for the planking of the fuselage. It was ready for test flights when I finally became one of the lucky winners in the redeployment raffle, so the model was redeployed in a crate - and got home before I did.

Looking not unlike Jerry Stoloff's highly successful contest job pusher Yogi (oz221) in force layout, it combines real flyability with scale realism, throwing in for good measure the possibility of a splashing session of ROW in the old swimming hole. In this regard it would be most cheerful to say something about taking the job down to the water, starting the motor and presto - into the air. Most cheerful, but not quite true, since model flying boat take-offs aren't accomplished as effortlessly as all that.

To begin with, in take-offs from water the frictional resistance increases rapidly until the hump speed (usually a little less than half take-off speed) is reached; unlike ground take-offs, where resistance decreases as the load on the ground decreases. Primary trouble will be found in the use of wing-tip floats. These dig into the smallest wave or drag the ship in tall-chasing circles. The only successful take-off procedure with tip floats is to get the ship going forward fast enough, so that it passes the hump speed and gets up on the step be-fore either one of the floats has a chance to play 'porpoise.' Another trick, although perhaps not strictly authentic realism, is to use sponsons fastened on with brackets in the landing gear sockets. These will give much more consistent take-offs than the use of wing-tip floats. This little problem of getting snappy ROW take-offs is just the thing that makes hydro flying so intriguing, so maybe you can figure a better solution than this.

Even if you shouldn't care for the wet end of amphibious craft, you can't fail to appreciate the Seabee's qualities as a landlubber. Top notch on this side of the ledger definitely goes to the ability of flying in fair weather or foul with no broken props. And in this day of half-buck 'choppers', that's an economy for certain.

For a simple method of enlarging the plans, connect the graph lines and reproduce the drawings on a squared graph. Using dividers and multiplying all dimensions by four will give the more exacting modeler a working plan.

The fuselage is the keel-and-bulkhead type, planked with 3/32 balsa. Much of the fuse-lage planking can be done in 2 inch wide strips and in no case was it found necessary to resort to the 1/2 in wide strips often recommended for planking. I found that it is easier not to try to run planking strips the entire length of the fuselage; particularly is this true on the tail boom, where strips from bulkhead to bulkhead were found to be most successful. Soaking the wood in water will help a lot in bending it around curves. The lower half of the cowl is carved from a balsa block. Above the tail wheel and at the top of the tail boom, small balsa blocks will help fill out the difficult curves.

Fill in any small cracks or chinks with a mixture of balsa sawdust and dope. Sand smooth with rough and fine sandpaper. Cover the entire fuselage with silk and apply several coats of dope. Carefully mark the window sections on the fuselage and cut them out. Reaching through the wing-mount section, scoop out the top of the bulkheads that protrude into the cabin, leaving a ring to reinforce the cabin frame. Floor the cabin with 1/8 balsa.

At first, I thought it would be necessary to form the windows from heated Plexiglas, but none of the curves proved compound enough to require this, plain sheet celluloid being used. Don't try to cement the entire window in at once; fasten in side by side and allow to dry.

The landing gear is fastened on with standard aluminum brackets and 1/8 stove bolts. The taps for the bolts are permanently cemented on the inside of the fuselage. For water flying, remove the landing gear and replace the bolts along with a felt washer to make the holes water-tight. Plywood inserts in the planking where the gear attaches, strengthens and prevents wearing away of the bolt holes.

Bend the motor mounts from light-gauge sheet metal which may be purchased in any tin shop. This makes a much more satisfactory motor mount than aluminum with only a fraction of an ounce more weight. Bolt to the 1/4 in plywood firewall.

The tail and wing are of conventional construction and need no explanation. The wing floats are removable with common dress snaps. The base for the floats is cemented to the balsa plate between ribs 9 and 10. The cowling top is carved from balsa and built integral with the center section when the two wing halves are connected. The wing is held on with rubber bands fastened to the 1/16 wire pins in the fuselage. Cover the wings and tail with silk or nylon and give two coats of clear dope before color doping. Mark the doors and controls with a ruling pen and India ink.

Pusher props are scarce and if you, like myself, are too lazy to carve one, the problem may be surmounted by reversing the direction of rotation of the engine and using a standard prop. Olilsson and similar type engines may be reversed by removing the crank-case cover and turning it so the points track with the new rotation direction. Bantams may be reversed by simply turning the timer to the opposite side. Do the testing on dry land, you'll have enough extra details to worry about when flying from the water." 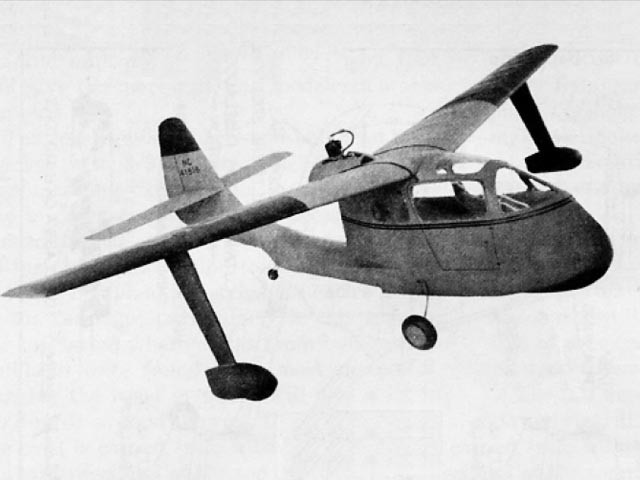