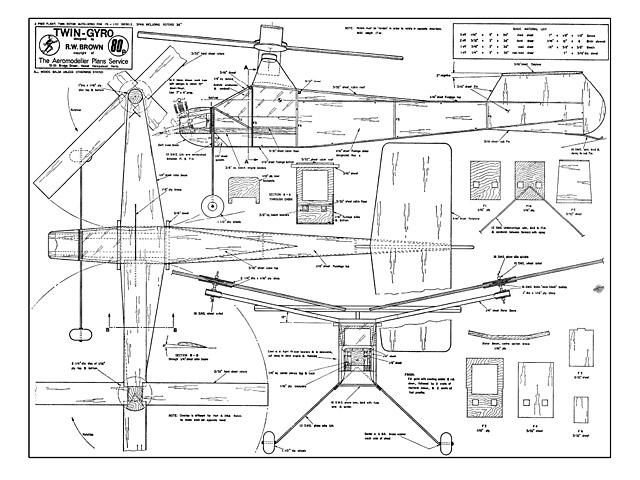 THE DESIGN of this model was based on the results of a series of experiments made with small model Autogyros of various configurations (see February issue). It was originally powered by a Doonside Mills .75cc diesel, and in this form was first flown at the 1974 Nationals. However it proved to be somewhat under-powered, so an ME Heron was substituted, giving a very much improved performance.

Built as shown and with the centre of gravity positioned as on the plan, the model should climb well under power and glide forward like a normal model when the engine stops. If, however, a vertical descent is more to your liking, ballasting to bring the CG further aft should achieve the desired result, although even more down-thrust may then be required to prevent the model hanging on its prop.

Twin-Gyro has proved to be quite stable and from experiences with a larger model of similar configuration equipped with single channel proportional radio, it seems likely that this model could be flown successfully with very light single channel equipment. This type of twin-rotor autogyro lends itself to radio control as the gyroscopic forces generated by the contra-rotating rotors cancel out, thus overcoming the control problems associated with rigid single rotors.

Construction should prove quite straightforward but a few explanatory details may help.

Fuselage: First cut out all the formers, not forgetting to cut out the holes for the engine bearers and the large hole in F3 which forms the cabin framework. Next, cut out the main fuselage sides from the front face of F1 to the tail, to the outline marked with a black triangles.

Assemble the fuselage sides to formers F3 and F4 ensuring that all is square. When the joints have set, glue the engine bearers in place in F3 and F4, and add the cabin floor. While waiting for the glue to dry, bind the undercarriage to F1A and add F1 using epoxy adhesive to make the 'sandwich'. Slide this former/undercarriage assembly onto the engine bearers, and glue in position with epoxy.

Add the remaining formers, making sure to glue F6 securely to the leading edge of the fin tongue. Add fuselage top and bottom sheeting, followed by the underfin and cabin roof, filling the gap between the cabin roof and fuselage top with kin. sheet from F4 back. Add 3/16 dowels, 1/8 square spruce windscreen frame members, tailskid, windows and soft balsa block under the nose. Build up the detachable engine cowl in position over the bearers as shown, placing a sheet of thin polythene between it and the fuselage to prevent it sticking permanently in place.

Sand all over, shaping nose to a rounded profile. Cut out the cowl to clear engine cylinder, exhaust stacks, fuel-pipe, etc, after temporarily installing the engine..." 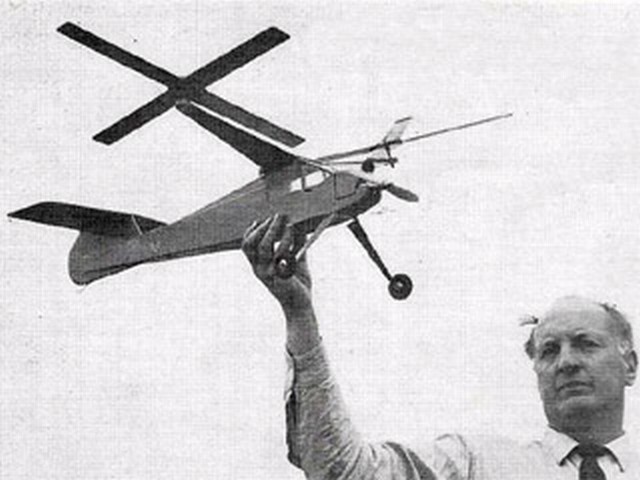 Hi Steve and Mary, please find attached a selection of photographs of the Twin Gyro (oz plan number 9495), recently completed by my friend [more pics 003-005]. Mods include a conversion to electric power, rounding of the nose top decking and addition of a full cowl, access hatches for the electronics and a built up tailplane covered with Modelspan. Finish is automotive paint from aerosol cans over a sanding sealed and primed surface. The pilot was 3D printed with additional details added. The model required an eighth of an inch shimming under the leading edge of the stub wing and a reduction in downthrust as drawn. It is a reliable performer now, flying in wide left hand circuits under power, it handles wind well, the autorotation phase of the flight brings the model back to Earth at a fairly rapid but safe descent rate, rather like a dethermalised conventional model. It is a very robust airframe and despite suffering a few heavy arrivals during trimming, sometimes on the rotor tips, no damage other than slight cosmetic dings has been experienced. It's certainly an eye-catching and different model.
PeteTheobald - 16/08/2019
Hello again Steve and Mary, as proof that this slightly bizarre design can actually fly, please find attached photographs of my friend’s Twin Gyro flying nicely [more pics 007,008]. It was built from the free plans you so kindly shared here.
PeteTheobald - 26/11/2019
Add a comment