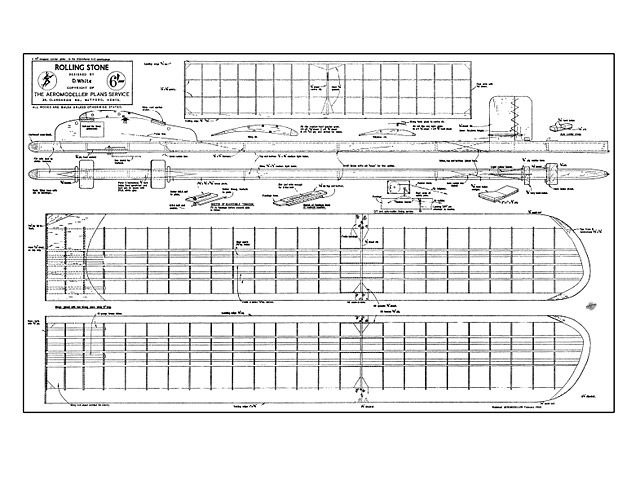 Rolling Stone. Contest glider to the International A/2 specification.

Quote: "OVER THE PAST TWO YEARS, a quite definite design pattern has evolved for an all-weather glider to the international A/2 specification to suit the variable British weather conditions. The basic design appears at first to be very simple and devoid of the elegance to be found among, for example, designs from Finland, Germany and the USA. We have already published several model designs which fall into this category, notably Al Wisher's Wishbone (oz3727). Additionally, John O'Donnell's designs have been in circulation. Rolling Stone was first revealed in the August 1963 edition of Northern Area News, and from that worthy publication we were able to reproduce its features in the current Aeromodeller Annual.

Now we are able to offer full size plans for this very successful design and by success,we mean the following impressive table of 1964 contests, alone...

Dave would be the last to claim that this is a high time model for dead air conditions. It is strictly a 'thermal model' with a normal still or average of just under two minutes. Thermal location and launching tactics now play such a part in model glider competitions that designs like Rolling Stone have been evolved to hold the lightest of thermal lift and take advantage of conditions.

Design Origin. Three years ago, when Dave started flying contest models in earnest (he had been at it on and oft since about 1952), he built two O'Donnell Fossils which he found to be quite good flyers, but terribly unreliable on tow and in strong lift. Dave discussed this with J.O'D, but John could offer no reason for this as his own behaved perfectly well. The design was the best Dave had ever seen in very light lift. Recommended trim was very tight right hand circles, but John's model certainly didn't fly in what Dave calls tight circles. Fifteen foot diameter with the nose chasing the tail is what he likes, but he could not recommend this to anyone without experience of short nose models.

Anyway, it was decided that the Fossil was not the right model for Dave, but he couldn't be convinced that the basic design was bad. The pylon A/2 'feels' right to him. Mark I Rolling Stone was now born and first flown in Jauary 1963. It was simply a stretched-out 'Fossil' (Benzedrine) without underfin and with a thin Finnish section. This, in still calm air, would beat anything in the York Club at the lime. The thin section, of course, warped the wing, and it wouldn't tow well. It was also hard, even impossible to tow in a wind. Although the times were well up on other A/2's around, it didn't look right and was too fast and brick-like.

Then came the ideas that Dave has retained ever since. Dave deliberately ignored all performance factors and went solely for reliability on tow and in thermals. Sections became thicker and well and truly flapped. The nose became shorter and shorter, tails were under cambered and polyhedral used. The 'Fossil' diamond fuselage proved to be very awkward for fitting adjustable tow hooks (which were now considered essential.) and wing mounts, so the fuselage went square. This worked instantly and the model is still just about the same as it was two years ago. A lot of people have trouble with trailing edge warping and buckling, especially as the usual stock size is 1 in x 1/8 in. This is easy to cure, and Al Wisher certainly established a good point when he originated it. At York, all the flyers use 1 in x 5/32 in, an obnoxious size to sand, but they buy it direct from Solarbo, cut from Quarter grain 8-10 lb stock (9/- a doz).

Construction Details. Construction is straightforward as the plan indicates, and familiar to all modellers with even moderate experience. The simple essentials for success include spruce spars, the adjustable tow hook and the clockwork timer actuated de-thermaliser mechanism. The latter must, in Dave's words, be '200 per cent' reliable. It is released when the pin attached to the tow line loop detaches at the point of launching, sets both the auto-rudder and also allows a spring to pull the timer to the 'on' position.

Other construction advice is that the nose should be wrapped with silk or bandage. The tow hook must be fitted before the second side is put on the fuselage and use Japanese tissue covering for the tailplane. Pay attention also to the wing seating, which is quite important.

The flight trim should be with a very slight left lean at tow, having the tow hook as far forward as is tolerable. The model must turn in left circles and tighten up considerably when in lift. Make all tests on a full length line and be absolutely sure that the D/T system is reliable. Stall recovery is so good and consistent that Rolling Stone can be spun off to gain 20 ft. on a stretched line launch. Now get building for the first competition - it's the K&MAA Trophy on March 21st." 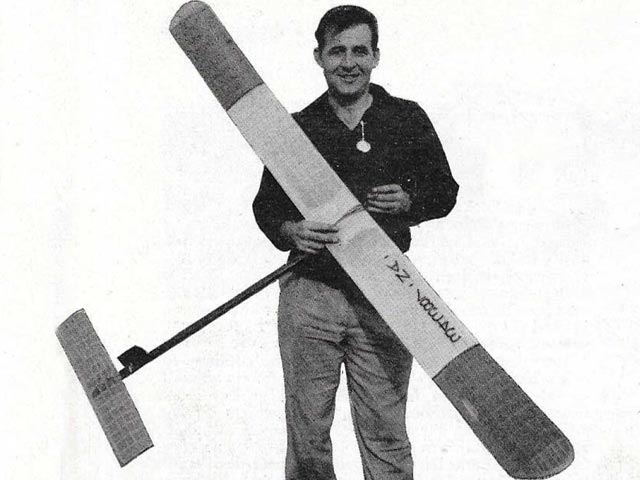