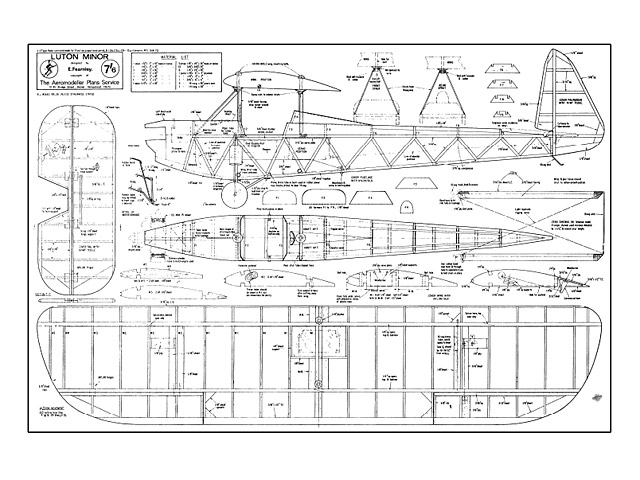 Quote: "The model on the cover! Eric Fearnley's LUTON MINOR updated for radio control and 2.5cc.

IT WAS one of those wet, windy winter weekends, and I wasn't in the mood to start drawing up a new project. Looking through my pile of old plans, I came across the Luton Minor (oz397), which I had designed for the Aeromodeller sixteen years ago as a free flight scale project. The simple lines and ability to take hard knocks had kept this design popular over the years and I wondered if it had possibilities as a radio 'fun model' for relaxed flying on the local beach.

I knew of one which had flown very well with single channel and a 1.5cc diesel, and I decided to take it a stage further. Three spare Kraft KP7 (metal cased) servos were produced, and it was obvious that the two would go in the fuselage quite easily. It seemed a pity not to try to get the third function in, so I decided to fit ailerons for lateral control, do without rudder, and have elevator and throttle on the other two. Owners of modern 'miniature' outfits will find that three servos will fit across the fuselage - who's for a 'full house' Minor?

Pete Russell, well known in multi acrobatic circles, was not impressed. His experiences with the real aircraft were rather shattering. On take off, he thought the ailerons were not coupled up, as the response was so sluggish and the aircraft seemed to be a rudder controlled machine. I was by this time committed, so I pressed on.

In keeping with the old time atmosphere, I decided to fit a throttled Mills 1.3 cc. We took it down to the beach (on Boxing Day!) and let the old girl have her fling. My first correction on aileron almost made me drop the box, as the model whipped into a turn so fast I thought it was the end! The zero dihedral, and liberal control movement were nearly too much. Again we tried, oh-so-gently, and we were getting some real flying, the only trouble being that the Mills was knocking it's heart out to gain any real height. After .61 powered 'military aircraft' flying, this was just a little too relaxed for me, though I did manage a loop after nursing it up to it's absolute ceiling of about 100 feet, and diving it hard. My son Brian, who was born during the month I designed the original model, had a few flights with it and obviously thought the old man was past it, flying this underpowered crab. The maximum thrill was limited to doing touch and goes across the sand, and a campaign was started to get Father to put more kick in it.

Back to Pete Russell for advice, and an O.S. 15 was produced. I shivered - thinking of the original .5 cc DC Dart powered model, however I was not going to chicken out.

One thing is certain, we are not going to wear out the O.S. 15 with overstrain. At full throttle (if you have the nerve) the model will do an axial roll that would do credit to a fighter. However, when I fly it, using the superb O.S. throttle, a very good scale effect is obtained. If Brian wants to use it as a sort of parasol Kwik Fli (oz6526) well at least it will stand the stresses without breaking up in the air!

Construction is quite straightforward, although perhaps a little old fashioned, and should not present any problems. Commence the fuselage by pinning down the two 3/16 in sq balsa longerons directly over the plan, then add the diagonal braces and 3/16 in sheet fill-in pieces. Remove from board and build the other fuselage side. Cut out all the cross braces, and pin those for the tops of the fuselage to the plan.

Invert the basic fuselage sides so that the flat, top longeron is over the plan in the correct position. Glue sides securely, using a net square to ensure that they are vertical. When thoroughly dry, add the remaining cross braces - again checking for squareness. Next, add the 1/8 in balsa sheet fill in between the cross braces to the forward fuselage, as shown on the plan..." 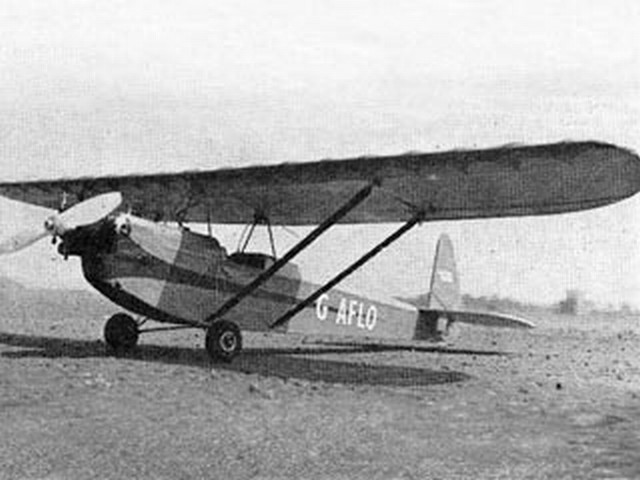