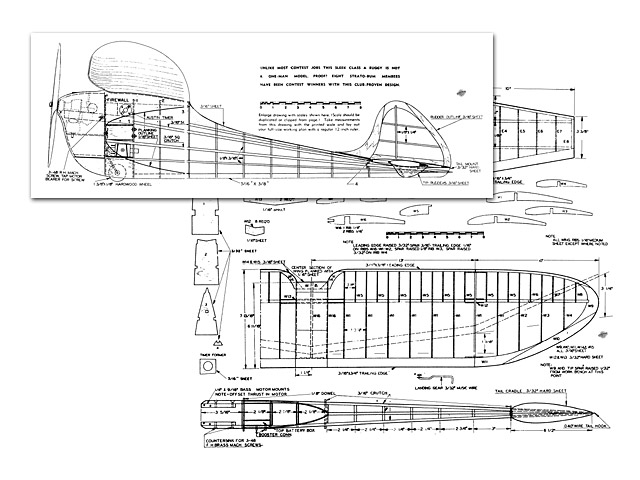 Quote: "The final proof of any contest model rests on the results achieved by builders other than the designer. Members of our club, the Strato-Bums, range in age from 13 to 19 years, and every one has built and flown this model successfully. As a matter of fact, each of the gang has won and placed at a contest, at one time or another. These contests range front local to the Eastern States and the Nationals. The latest was George Stumpf, age 15, who won the class A event at the Sky-Lancers contest in 1943; he also had the high single-flight time of the day. When the first Javelin was designed, back in 1939, there was no provision stipulating the size or type of landing gear necessary for gas models. Immediately, the thought arose that a skid would eliminate 90% of the landing gear drag, reducing the over-all parasitic at least 35% and thereby automatically increasing the efficiency of the model.

The use of a skid necessitated the design of an unconventional model, as we then knew them. Force arrangements, plus the economy factor in regard to props, required a high thrust line. This then dismissed the possibility of a cabane or a pylon, as I didn't care to go too far astray from conventional theory or type. The real departure was in the use of my pet theory: Remove the stab from the turbulence created by the prop wash and the downwash from the wing. This permitted the use of a stab having only 1/3 of the total wing area, reduced the induced drag, and still maintained longitudinal control of the model.

The stab was placed at the base of the fuselage, a good 6 inches below the thrust line and almost 9 inches below the chord line of the wing. Dihedral and twin rudders were used in the original stab. The rudders were to act only as skids to maintain vertical balance while standing or landing. The dihedral was substituted for the vertical fin. The directional stability was excellent; the plane had a very shallow turn without any extreme banking tendencies, and the model achieved a tremendous climbing turn without standing on its nose..."

Note this is a low resolution plan. If anyone out there has a good high res scan of this plan, it would be much appreciated. 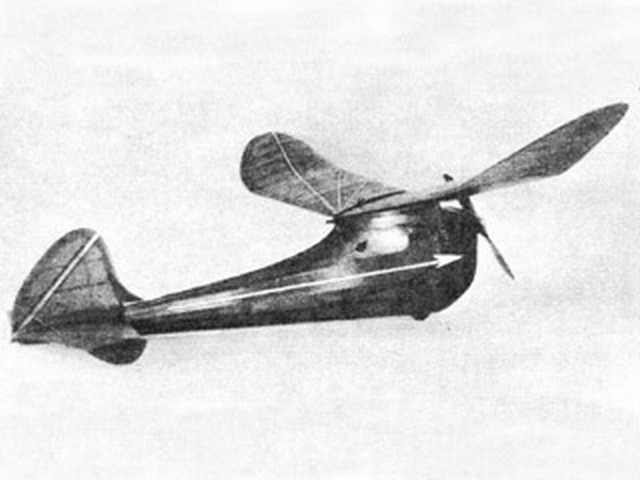 I just want to say very how pleased I am to hear about a model aero club called the Strato-Bums.
SteveWMD - 27/11/2017
Add a comment