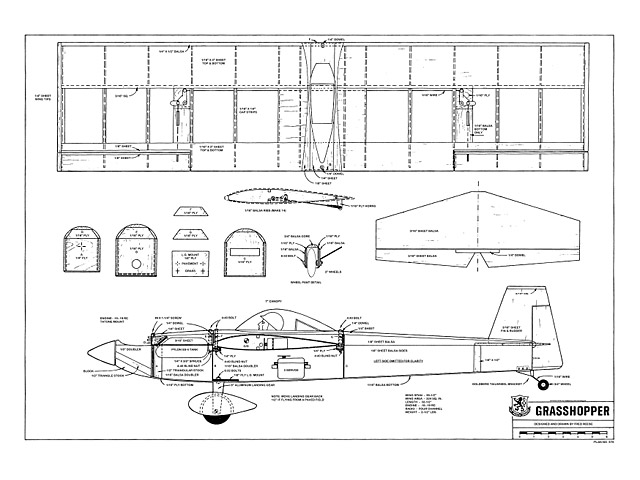 Quote: "The Grasshopper is a small sport-pattern airplane. powered with a .15 to .19 engine that will go as fast and do all the maneuvers of the current pattern airplanes. Certainly it is not intended for pattern competition, but rather for the sport flyer that likes small airplanes and spirited performance.

For the past four years I have been flying and designing quarter midget racers and am certainly impressed with the performance of the .15 sized engines.

Many factors were considered in the design of the Grasshopper and weight was considered first. Most quarter midgets weigh nearly three pounds, vet the minimum weight is only 2-1/2 pounds and excess weight saps performance. The Grasshopper with an OS .15 weighs a little less than 2-1/2 pounds and the wing area has been increased from 300 to 324 sq in to further reduce wing loading.

The fuselage was made as small and streamlined as possible while still allowing room for the equipment. The CG is slightly more rearward than most racers and I compensated for it by lengthening the tail moment. Elevator response is still smooth and the nose doesn't drop as much with power off which makes landing easier. I also washed out the wing tipes about 1/8in by twisting the wing while tightening the MonoKote covering, in order to prevent tip stall.

The rudder was more of a problem and had to be adjusted and enlarged several times to allow knife edge flight ...the Grasshopper, although not intended for racing, does meet Quarter Midget racing rules with regard to dimensions and can easily be converted to a Miss Cosmic Wind or Little Gem and be a legal racer." 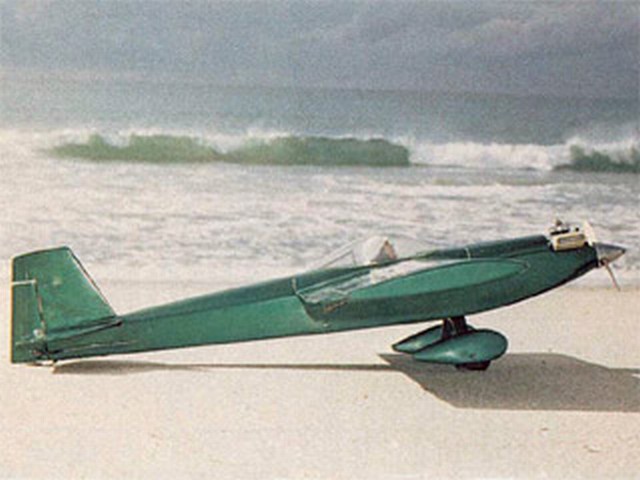