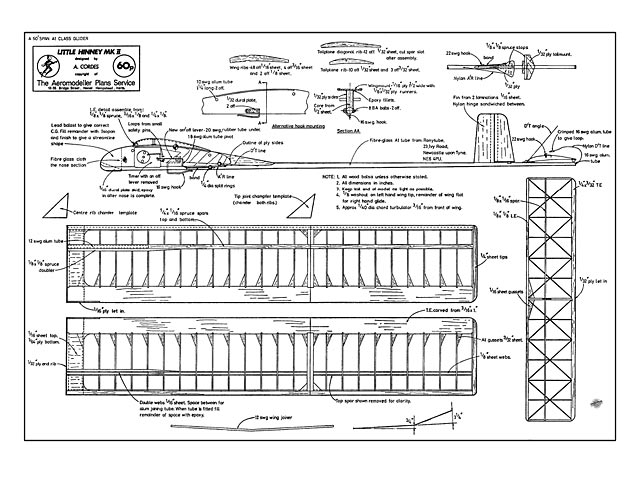 Quote: "THE A/1 GLIDER has seen considerable change and development since the original Little Hinney was published in the March 1972 issue. There has also been a marked change in the competition status of the Ail and contest entry statistics show it to be now the third most popular class, behind A/2 (F1A) and open glider.
Most of the design evolution has occurred in an internal sense, eg airfoils and structures, rather than in the external sense such as aspect ratios, tailplane size and moment arm, so the A/1 looks very much today as it did four or five years ago, This is certainly true of Little Hinney 11 which outwardly is almost identical to its predecessor, but as will be described is rather changed internally which, in essence, means that the new aeroplane is now entirely different to the old.
There is nothing quite like a rule change for accelerating the development of a class of model. This has been seen time and time again in the FAI classes and is certainly true of the A/1. In 1973 the specification of this class of glider was altered, increasing its minimum weight to 220 grammes or 7.76 ounces. At that time most flyers who wished to compete in A/1 contests simply added ballast to existing models, thus bringing them up to the new required minimum weight. Unfortunately, this process induced two major disadvantages. Firstly, which was perhaps why the model specifications were changed, the dead air performance was quite drastically reduced. In the case of Little Hinney I the addition of nearly two ounces of ballast (an increase in total flying weight of some 35 %) resulted in the dead air time from a 50 metre towline being reduced from approximately 140 seconds to about 85. Secondly, the model structures proved to be inherently weak and were not adequately able to withstand the rough and tumble of typical British contest conditions..." 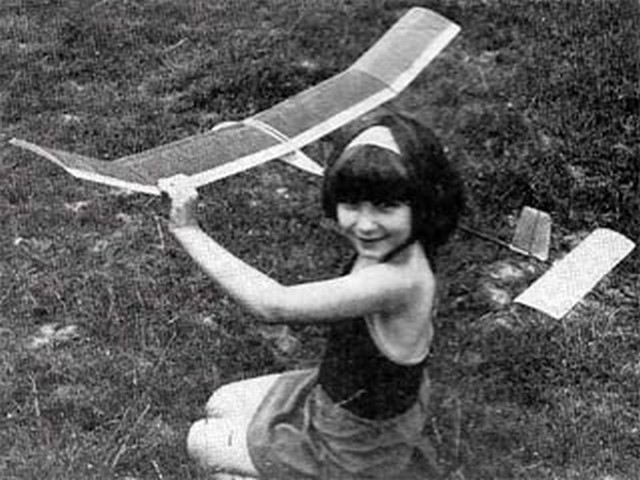