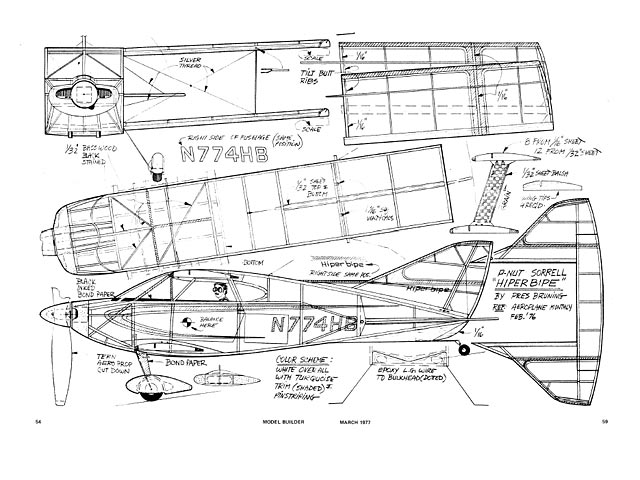 Quote: "Sorrell SNS-7 Hiperbipe, by Pres Bruning. One of the most eye-catching of modern biplanes, we'll probably see many versions in model form. Just to get warmed up, try this one on for size.

The Sorrell SNS-7 High Performance Biplane, 'HIPERBIPE', is a very interesting, very 3-dimensional looking airplane, and quite an aerobatic performer as well. This is one of those planes that just cries to be built in model form. As a Peanut, it is quite large. You can imagine how big it would be as a Walnut. Dig that large square fuselage (plenty of room for rubber to flop around in)! Also, that flying fuselage allows you to use the scale horizontal stabilizer.

Let's begin construction by talking about the fuselage. I built two identical sides inside of a cardboard cut-out profile. To space the two fuselage halves apart accurately, I taped a cardboard section between the landing gear vertical pieces. Next, I taped a folded-over piece the width of the cross pieces to top, bottom, and trailing edge of the fuselage rear. Now being ridgidly braced, glue in the remaining cross pieces, removing the cardboard afterwards. Now add the remaining longitudinal stringers.

Cover canopy base line from the second vertical back from nose block to the fourth vertical with black Dri-mark stained bond paper. Now add in bass-wood cabin bracing struts and landing gear. Two verticals of medium hard 1/16 square balsa were added in the center ahead of the motor peg, 1/2 inch apart from each other, to prevent bending of the motor peg. Next, cover the entire fuselage, minus canopy area, with white superfine Japanese tissue. Now is the time to add the tissue trim and lettering.

Before building the wings, trace the wing plans and turn over, giving you the plans of the left upper and lower wing halves. Nothing unusual about the construction, other than the tips being shaped to fit at an angle using a card-board angle or balsa angle block to assure same set up for all four tips..." 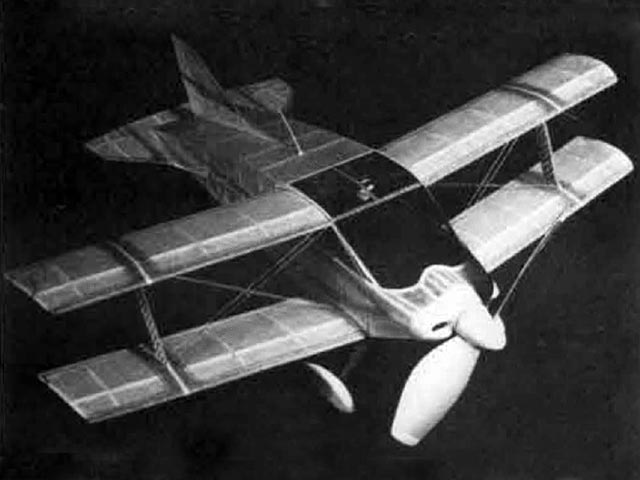