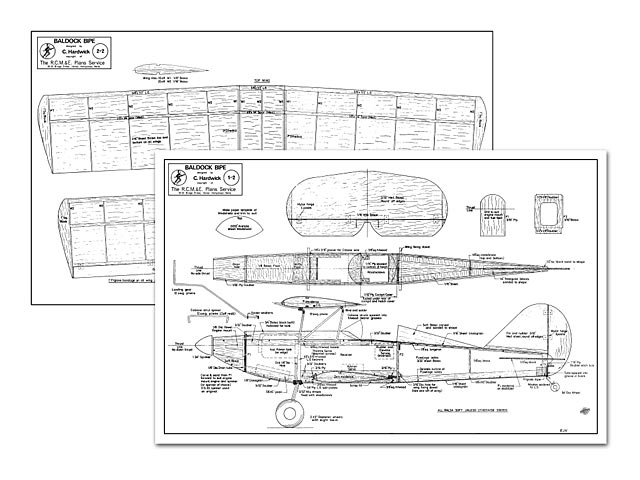 Quote: "HAVING become tired of flying high wing monoplanes I decided it was time I tried something different and after watching fellow members of my club flying biplanes, I decided that a biplane it had to be for me. Looking around, I could find nothing small enough available in kit form or on plans that I liked the look of, so I decided to roll my own. Having only .20 size engines to hand it was apparent that the plane had to be about 36 in span, with a take-off weight of about 3-1/2 lb.

The original was flown on an O.S.20 and the performance proved to be good, but at a later date I fitted an H.B.20 and the difference in performance was amazing to say the least, she will now become air-borne after ten to 15 yards and climb away hands off (Maybe a case of the correct prop/motor combination, rather than just brute power - Ed).

This being the first model I have ever designed, it was with some trepidation on a cold January morning that I started the engine to try out the ground handling and a few dummy take-off runs. (After taking plenty of photographs first, just in case.) I was very reluctant to try a flight as there was a 20-knot wind blowing across the patch which is somewhat short for a test flight, but as time was running short and I was anxious to try her out, I filled her up and started the engine, put in a touch of up elevator and full throttle and away she went.

The grass was long and wet which caused considerable drag and the end of the patch was getting too close for comfort so I decided this was it, now or never. I fed in full up elevator and she broke ground a couple of yards short of the ploughed field. She climbed away quite happily after a couple of slight trim ad-justments and then flew hands on in spite of the strong wind. After a couple of circuits the engine decided to cut, and this was the moment I found out that she had to be brought in faster than the monoplanes I had been used to. Time for just one more flight I decided, once again she was rather reluctant to leave the ground but behaved beautifully in the air..."

Article pages, thanks to RFJ.
Alternate version of same plan, as one sheet. 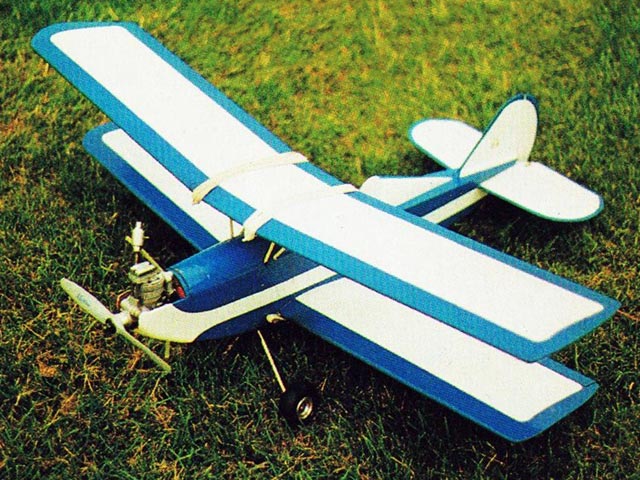