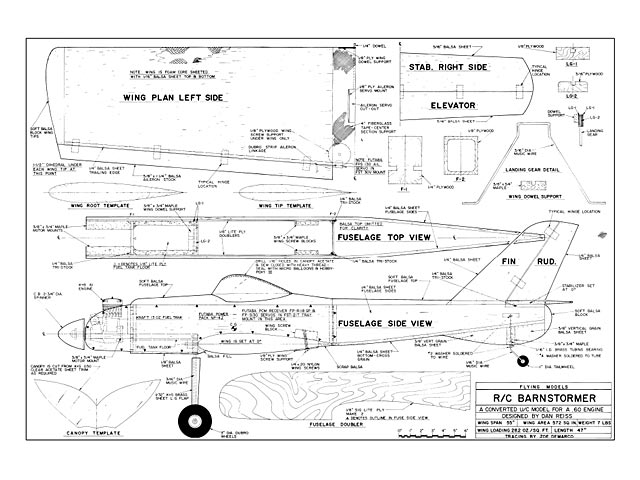 Quote: "Conversions of control line models for radio control use is nothing new, the most notable transition being the Top Flite Nobler (oz525). The Nobler had been a very successful model in the U-Control circles for quite some time and went on to continue this success as a popular R/C model - see RC Nobler (oz21). However, many years prior to the Nobler's appearance, there was a model around that absolutely dominated everything in the flying arena. It was the Trixter Barnstormer (oz3658). In the late 1980s it's now hard to imagine that there was a time when there was not only no radio control available but two line U-Control was just in its infancy. Models were just being designed and developed to take advantage of this very sophisticated (for that time) means of control and the Barnstormer was one of the first to reach national prominence.
The plane was designed by Lou Andrews and kitted by the Paul K Guillow Company. It had won a significant number of championships from 1948 to 1951 and was usually powered by Fox 35's. The imports had not invaded our shores yet so Fox enjoyed quite a reign of national popularity. As the Barnstormer won, so did Fox. They were an unbeatable pair. At that time, I was living in a New York City suburb which was surrounded by the Atlantic Ocean on one side and an enormous bay on the other. As I got interested in powered flight I was compelled to exhibit some kind of control over my models. Free flight was out of the question and radio control was still in the hands of a privileged few licensed hams who hand made their own equipment. So into U-Control I went advancing from trainers to intermediate planes until finally I was able to master the supreme ultimate model of all times, the Barnstormer. Like any good model I had more than one, and at $5.95 for each kit (steep even for that time), they just had to be good as 1 bought one to replace the one that I had just got done crashing.
Of course, they were powered by Fox's and I took great pains to fly from grass instead of concrete just to help the engine survive in the event of a crash. I think the engines cost about $15.00, an enormous sum. Control was provided by a thing called a Jim Walker U/Reely. It was made from black plastic and you held it in your hand to control the model. Its featured attraction was that it had an internal drum that was used to store the U/Control wires when not in use and even for flight. There was a handle on it that al-lowed you to reel in the wires and let them out up to about 60 feet so you could fly in any diameter circle that was desirable. When you were through flying you just cranked on the handle to reel in the wires. Now that was truly hi-tech! I think it cost about $11.00.
As you can tell from all these high prices I must have been some spoiled kid. Now, almost forty years later, I just had to have another Barnstormer The conversion to R/C was not too difficult especially after I was able to get a set of the old plans. The R/C model is about 10% larger than the original since I had to increase the size of the fuselage a little more to be able to fit my Futaba PCM flight pack. But beyond that the model is a close replica of the original..." 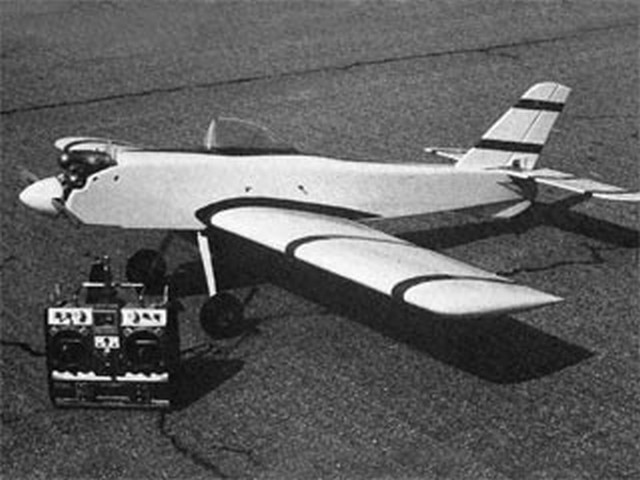