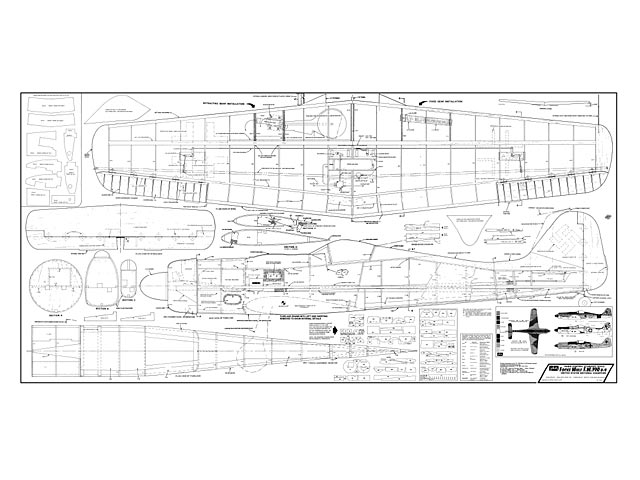 Quote: "Hey there, Here is a scan of the Pica FW190 D-9 kit plans. They were in 3 sheets with a lot of background screen, Gene Rock managed to clean that up and stitch them together nicely and reduce the 25meg file to 1 meg in the process. Many parts are shown 1/4 size on the plans. This is a .60 powered scale aircraft. You do not have a plan in this category for this particular plane as of yet. The plans also show how to make this into the TA-152 version of the FW190. Dave"

The Focke-Wulf 190 D9 from Dave Platt Models is a scale plane that will get out there and fly like a sport ship.

Fame can be a peculiar thing at times for reasons that bear little or no relation to the original cause for recognition. Probably the best all-around fighter that Germany produced during World War II was the Focke-Wulf FW-190, although it will forever be overshadowed by the more numerous Messerschmitt Bf-109. To add to the irony, within the field of model aviation, it is the 'oddball' variant of the FW-190 that has gained the most widespread acceptance: the FW-190 D9.

Why the FW-190 D9? An almost incidental reason is the fact that the FW-190 in the Air Force Museum at Dayton is a D9; the primary reason is that the D9 lends itself to modeling much better than the 'conventional' FW-190's. The conventional FW-190 was a single-seat utilitarian fighter that could be used either as an interceptor or a bomber, depending on specific requirements. It was powered by a 1600 hp BMW radial engine that gave it a typically pug-nosed look. There were a number of variations on the FW-190 that altered its armament, fuel load and power output (including a few B and C prototypes with inverted-vee engines), but up until the D version, the plane kept its original basic outline.

The prototype FW-190 DO and D1 were equipped with the 1776 hp Junkers Jumo 213-A, a 12-cylinder inline engine that could pour out 2240 hp with MW50 (methanol-water) boost injection. An annular (ring-shaped) radiator duct gave the engine the appearance of a radial, but the engine was much too large to fit into the space that the earlier radial engines had required. To accommodate the Jumo 213-A. the nose of the FW-190 D's were extended, and this required a corresponding lengthening of the tail and an enlargement of the fin area to retain correct balance in the aircraft. The FW-190 DO and D1 prototypes were successful, and production was begun under the designation FW-190 D9 (designations D2 through D8 were left vacant).

The long nose and extended fuselage of the FW-190 D9 is what makes this version so particularly adaptable to modeling, since its long nose and tail moments make it much more flyable than the typical snub-nosed fighters which are very difficult to balance and fly. The same proportions that work so well for a model also worked well for the full scale versions in the Luftwaffe. The first production models of the D9 went into action with Jagdgeschwader 3 in 1943, and in the following years there were vari-ants through the FW-190 F until the plane was replaced by the Focke-Wulf Ta-152, which bore a strong resemblance to the FW-190 D9, although it was structurally rather different. Many experts believe that the long-nosed FW-190's were the equal of the American P-51.

Having built quite a few models of German aircraft of World War II vintage (six Bf-109's and an FW-190 A), I was looking forward to getting my hands on the Dave Platt FW-190 D9 kit. Upon opening the kit, the first thing I noticed was the absence of numbers on the die cut parts and the fact that those parts were already falling out of the sheets. I was absolutely amazed at the superior quality of the die cutting in the kit. A well-written step-by-step in-struction booklet is part of the kit, and it should be read and followed carefully for clean and correct construction. Since the instruction book is so complete, I'll just hit the high spots in this review.

Fuselage: The fuselage in this kit utilizes crutch construction; that is, to lay out a horizontal planform and then build the top and bottom halves upon it. A fairly long, flat surface is required here; I use a blemished door purchased from a lumber yard at a cost of about $5.00. Such doors are usually pretty straight and flat, and a blemish or damage on one side wil. make it undesirable for use as a door, but a great buy as a work table.

After laying out the crutch, the top bulkheads and stringers are laid in. The engine mounts, gas tank box and servo rails come next, followed by the servos themselves, pushrods and the engine - I used a Webra Speed .61. After the installation of your favorite control rods. the bottom bulkheads and formers are put on. followed by the fuselage side skins. I found that if alignment instructions are carefully followed, the die cut skin parts fit pretty well. At this point., the sheet must. also be cut carefully for a good fit. The lower tri-angle pieces are installed next ¦ for contour sanding) and the lower fuselage section side sheeting is applied over them.

The wing: Actually, the first part of this kit that I put together was the wing assembly. The wing is of double spar construction, which is light, very strong and torsion resistant. A jig is provided for assembly with proper washout. The selection of wood throughout the entire kit was impressive. The ribs near the landing gear were cut from wood with denser grain than the outboard ribs, providing extra strength where you need it and keeping the center of mass inboard - something that contributes to this plane's phenomenal roll rate.

I chose to build this plane with retracts, so plywood ribs (not provided) must be cut out using the provided templates. (We'll pick up the discussion of retracts momentarily.) Once the retracts are installed, all the wing surface controls should be put in. The radio I used was a World Engines Expert with six channels. I installed one internal function, a bomb drop, using Ny-Rods through the wing. With everything linked up inside. the wings are skinned top and bottom, and all controls are checked out with the radio. The bomb drop requires an extra servo, and it is interesting to note that with three servos, a spool valve, freon tank and all linkages, there was still plenty of room in the wing center section..." 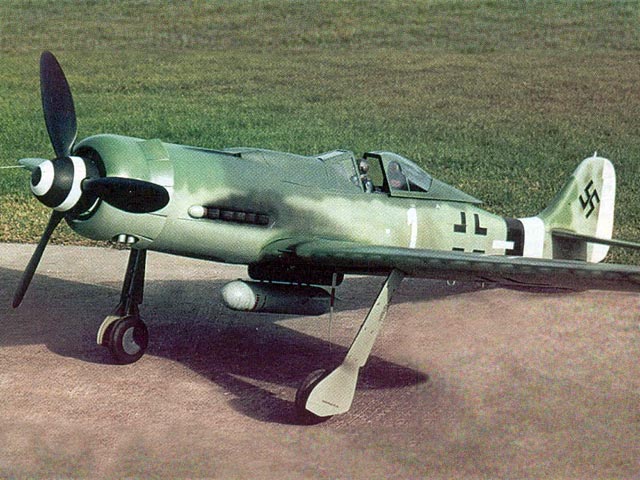