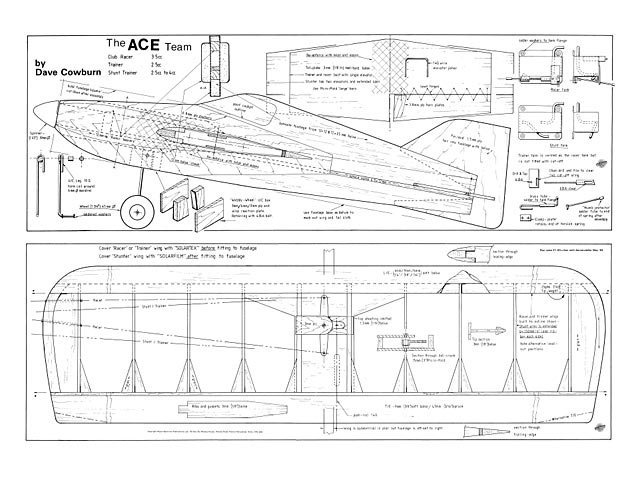 Quote: "THE ACE TEAM provides the builder with a choice of model that ranges from trainer to club racer or with an extended wing, a stunt trainer. The original model was designed to meet the specification for club racing as formulated by Humberside MFC (rules on page 253) the object being to produce attractive, easy flying models which can give close, exciting racing under normal club conditions on a grass site and be equally suitable for use at flying displays. (It is felt that models which are used regularly on the club field are going to be much better for display use than 'Specials' which are only brought out once or twice a year and with which the pilot is, therefore, unfamiliar!)

The resulting models have proved to be very successful and versatile, as, with minor alterations they can be built as trainers or sports-stunt models as well as the original racers. Details are included on the plan for all three versions: (1) Trainer with 2.5cc engine (2) Racer with 3.5cc engine (3) Stunt Trainer with extended wing.

In the past the 3.5cc class of engine was justifiably popular for control-line flying. The introduction of a general 2.5cc limit for FAI competitions led to the regrettable decline of this class of engine but thanks to the Radio Control car and boat fraternity the 3.5cc motor is once again receiving the attention of the engine manufacturers it deserves.

Now, with 'Club-20', these motors are readily available in a form appropriate to Control-Line use and there is now a wide choice of engines very suitable for club flying. The club racers presented here are designed to exploit this class of engine on the average club site. The reasonably large wing area will absorb the power of a 'hot' 21 without speeds becoming excessive, while the safe glide and low landing speed makes for comfortable handling in normal club or display use.

Control Line Club-20 could open up a whole new branch of the sport, just as Radio Control Club-20 has for the 'Wireless' fraternity so why not Circulate With the ACE Team.

The model shown in the plans has been developed from two previous racers and draws heavily on established 'Goodyear' and 'Combat' practice. Four prototype models have been built in the preparation of the plans, a trainer with a PAW 2.49, two racers, one with an STX 21 'Club-20' and the other with a 3.5cc Oliver and finally a stunter using an OS 'Max' 25. All were built 'to the plans' and all fly well, despite the wide range of engine types and resulting variation in balance points (Centre of Gravity) - a very tolerant model which, with suitable choice of engine/version, should appeal to all Control-Line pilots from novice to expert..." 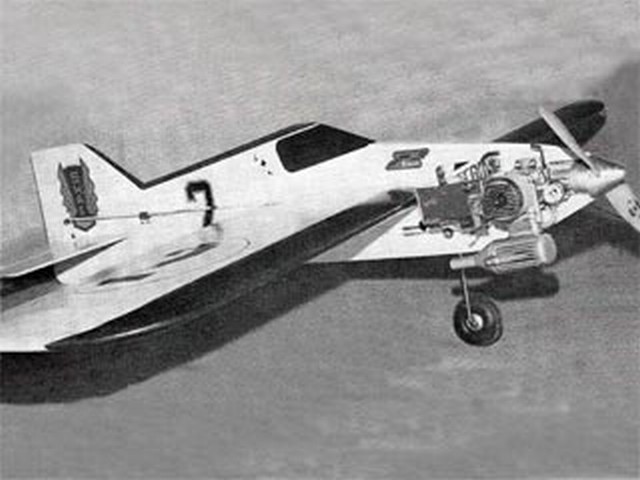