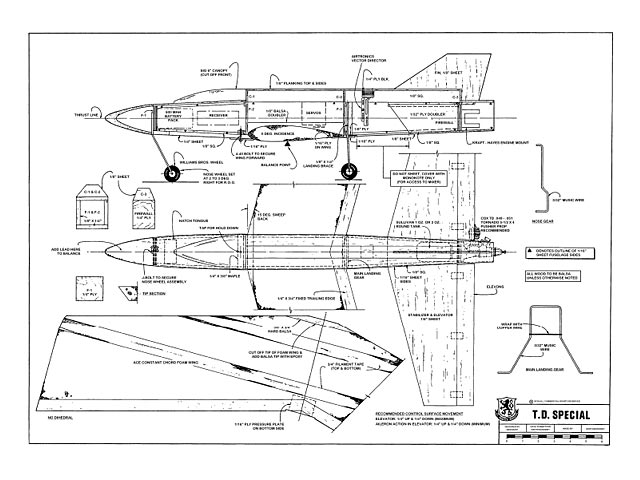 Quote: "Several months ago a fellow flying buddy of mine talked me into building a 1/2A kit for an upcoming race out at the Sepulveda Basin. I built the kit and flew it but, for a racer, it just didn't seem to have the speed I thought a Cox .049 should be able to deliver. Having a wild imagination and being willing to try anything once, I started asking some basic questions and did some thinking about what could be done to produce something that would meet the basic standards for the 1/2A class yet be as drag free, get the most penetration, and be as fast as possible using a stock engine and convenient building materials.

I talked to Kent Thomas, another fellow flyer, who has been flying a swept wing design of his own for several years. His planes are fast for a sport type model and penetrate extremely well. Kent said he uses a 20 degree sweep back, so I asked if 30 degrees would be too much. He didn't know, and I didn't either, but 30 degrees is what I decided on. As it turned out, it isn't too much.

Driving home on the south bound Santa Ana freeway at five in the afternoon gives you lots of time to think, and on a particular Friday I was stuck in that jam going nowhere. Still trying to come up with some good design, I began thinking about the basic points suggested earlier. Drag: Control surfaces create drag; prop blast over the fuselage has got to create slot of drag; the swept wing will increase penetration, thereby less drag. A pusher type aircraft has got to produce more thrust because there is nothing in the way of the prop blast.

All these things were racing through my mind when I finally pulled into my driveway. I pulled out a piece of shelf paper and started drawing some lines, using basic dimensions from other 1/2A planes I have flown and came up with a basic design. That same evening I started construction and Sunday afternoon I took this new creature out to the flying field. Building time - two days. Cost - about $5.00 less engine and radio which I already had on hand.

I would rather not comment on the first flight! If you have ever flown a tail heavy airplane with too much throw in the control surfaces, you will know why! Every afternoon I went back out to the field after making one adjustment or another. On Wednesday afternoon I fired it up, checked the controls, headed the plane into the wind and let go. The nose wheel lifted off the ground, the main gear lifted off, and I had my hands on 23 ounces of dynamite! The speed was there - the roll rate was slow but positive, and the elevator effective but not overly sensitive.

On the second flight that afternoon I tried loops and rolls and all that fun stuff you do on weekends with an airplane. With the TD Special loops are instantaneous, climbing speed the best of any ship in its class I have flown, inverted flight good with some down elevator, even outside loops are possible with enough airspace. The one maneuver that was slow was the roll - very slow. For racing, which is what this plane is all about anyway, the roll is plenty as you will see when you turn this plane into pylon #1.

The construction of the TD Special is basic and very much like many kits currently on the market. Attention must be paid to the wing hold-down, as it is unique. The design is sound, and adding wood that isn't on the plan may make the model stronger, but it will also make it heavier. To keep it fast is to keep it light..." 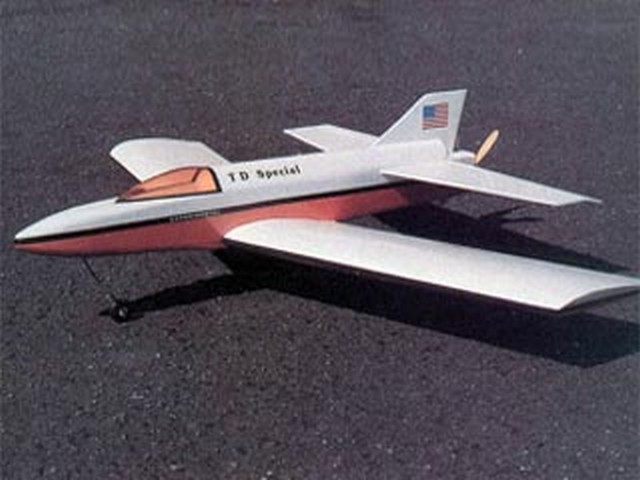 The TD special I just completed [pics 005,006]. It is electric-powered and a self-designed built-up wing was substituted for the Ace foam wing called for on the plan. Plan number oz9443.
David Wartel - 16/09/2020
Add a comment