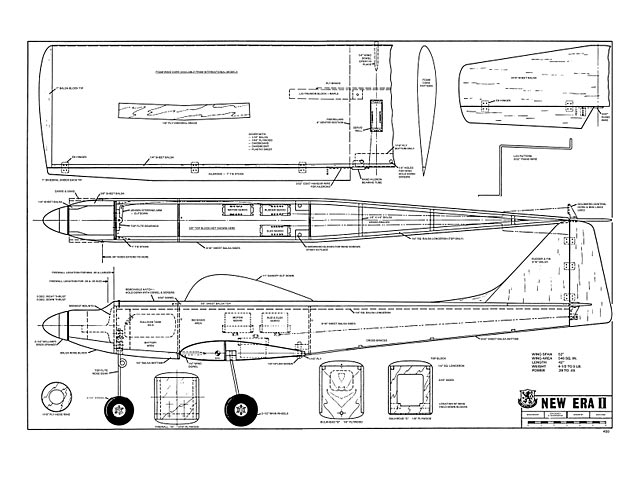 The New Era II is the result. It is an exact replica of the New Era I, but scaled up to a larger size to satisfy the urge for a little larger aircraft. The II can be flown marginally with .19 size engines, but it can also take a .45. The wing area is 546 square inches, and the all-up weight should be between four and five-and-one-half pounds. There is no doubt that some of you builders will want to put a .60 in the nose, and this can be done, as the nose of the New Era II was made large enough to take almost any size engine. If you are going to use a smaller engine, then use a spacer behind the engine mount, as shown on the plans, or move the firewall forward. Keep the prop in the same location as shown on the plans and adjust the location of the firewall to suit your engine size and type of engine mount.

The structure of the New Era II is strong enough to take any size engine, and almost any G-load that you impose upon it. The original prototype was designed around the fabulous OS Max .40 racing engine. This engine really has lots of power. While it may not have quite the top end that the K & B .40 has for all-out racing, it has lots of power and the ability to swing a large or small prop. In addition, it can be idled down to tick over with the best of them. Uncle Don told me about his lugging a 6.5 lb. shoulder wing Vics Custom Trainer around the sky with speed and ease, so we decided to use this engine in the New Era II. The combination is terrific.

The New Era II is very simple to build and the entire structure can be fabricated in one evening. The plans show a foam wing for the New Era II and this was what was used on the original. You can build a built-up wing if you desire by following the same type of construction that was employed in the New Era I wing. Either way, the wing is simple and doesn't take very much wood.

In keeping with the theme of the New Era, several new ideas were tried out on this model..." 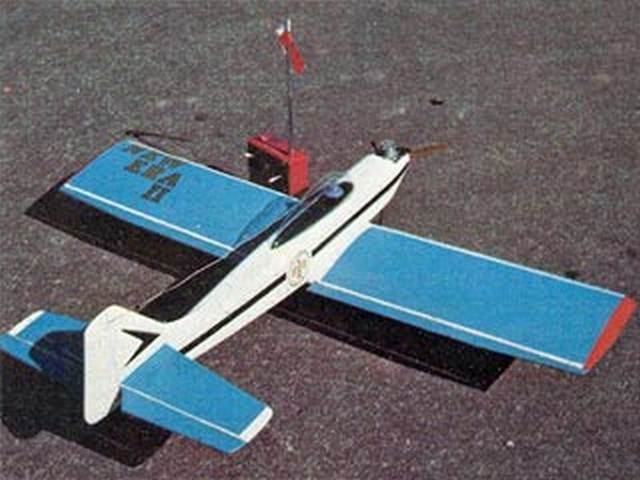