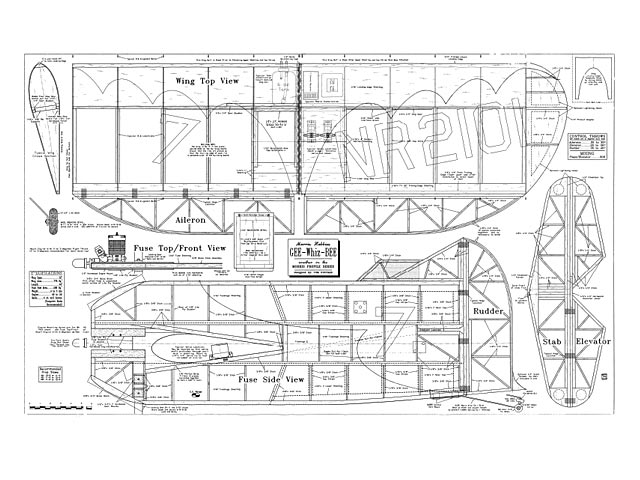 Have aligned the plan, cleaned it up a little, increased contrast.

One of the latest in a series by Morris Hobbies, this R/C aircraft's abilities are limited only by the wind, and a pilot's imagination.

It was a year ago last August that I came in first contact with the Morris Hobbies Gee-Whiz-Bee. I was attending a Giant Scale rally in Iowa City. I suppose now you want to know what the two have in com-mon? Well! The only thing is the flight demo put on by the local show team. After watch-ing that, I became convinced I needed one. I tend to be a sucker for things that are over-powered and look a little unusual.

A good friend of mine and a person who gave me a great deal of help on this project, Rick Knight, gave me no end of grief about even thinking about building one. I kicked it around for awhile and pretty much forgot about it until I got a call from the editor of FM, Frank Fanelli. I was a little cool to the idea until Frank told me I could have a MVVS engine and the tuned silencer to go with the kit. I just had to jump on that one.

It wasn't too long until I got the boxes in the mail. Just so you know: this article will touch on the construction but will also high-light more computer radio installation and flying. All the wood was typical for a kit in this price range. It is made up of mostly bal-sa sticks and sheets, with die-cut balsa ribs. It also includes hardwood, liteply fuselage doublers, landing gear, tires, a 6 ounce fuel tank, generous hardware pack, two sheets of rolled plans and an 18-page illustrated con-struction manual.

Construction notes: You need to think right away about the control hookup for the rudder and elevator. You won't be able‘to get past step five if you don't. If I was going to have one gripe about this kit, it would be the lack of information about hooking up the controls. Now granted this is not a beginner's kit, but just the same, I would have liked to see more information.

Morris Hobbies recommends that you use their Pull-Pull cable system. This is not included in the kit and it runs about $10.00 more. The part that I didn't like was how vague the instructions were when it came to servo installation and control hookup. If you don't use the Pull-Pull sys-tem they recommend, you must then use external NyrodsTM (similar to Sullivan's Gold 'n Rod). They give you absolutely no instructions on how to hook up the Nyrods. In the instructions, they tell you to see your hobby shop or call Morris Hobbies.

I opted to go for the recommended Pull-Pull system and ordered it from the local hobby shop. When it arrived I just knew those instructions would have to let me know more about the hook up. Wrongl The instructions were for the profile Hots which has a completely different way to mount the servos and install the Pull-Pull cables. I called the hobby shop to find out if there was a different system for the different Morris Hobbies airplanes and the answer was no.

Well, to make a long story shorter, I called Morris Hobbies and got the information I needed. It is a little difficult to visualize over the phone but it worked. The way I figure it is if they have a recommended way to hook up the controls, they should have shown it on the plans and explain it in the written in-structions. After all, if the model will perform better with a certain setup, most people will go with the manufacturer's recommenda-tions. I don't mean to get this review off on a bad note because this is really a nice kit and the model really flies well. You just have to make some critical choices right at the start.

Let's get going on the fuselage. It is built flat over the plan. (By the way the manufac-turer recommends thin and medium CyA for all the construction.) The fuse consists of a basic framework built out of a combination of %ths square and %ths by '43th balsa sticks. These make up the basic outline of the fuse-lage. Hardwood rails and landing gear hard points are added to this structure. The nose of the fuselage back to about the front quar-ter of the wing cord has a plywood doubler on both sides. I went with a thin coat of five-minute epoxy for this - I have never been a fan of using CyA on hardwood or ply.

Because of all the doublers involved, you have to get your Pull-Pull system in before you cover up the fuse. Let's talk about routing those cables. The thing you want to try to do is make the cable sheaths run very smoothly with gentle bends and no sharp kinks. The route is marked on the plan. Things to con-sider are your exit points at both the control end and servo end of the cables.

All of the servos are mounted in the wing. The main control servos are mounted to 1/4-inch hardwood rails (not supplied). Their output shafts go through the bottom of the wing. Remember that your elevator and rud-der are using the cables mounted in the fuse. Those servos need to be mounted as close to the fuse as possible, leaving just enough clearance for your servo arm. A good rule of thumb for Pull-Pull systems is to have your servo control arms equal to the width of your control surface control horns. It is also a good idea to use ball bearing servos. Pull-Pull systems put a load on only one side of your servo output shaft. If you don't use a ball bearing servo you will wear out the ny-lon top of your servo case..." 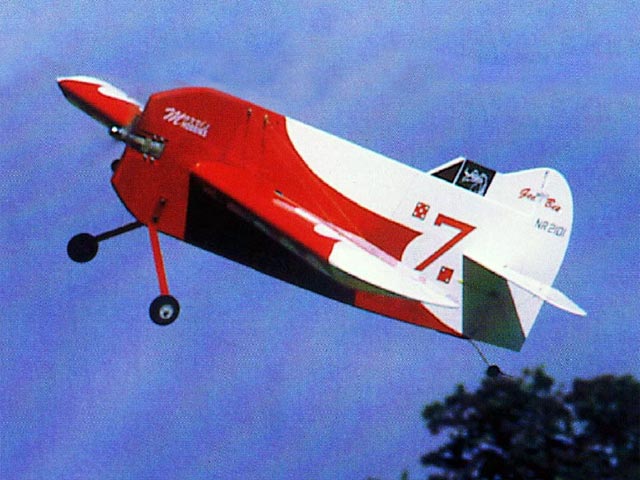