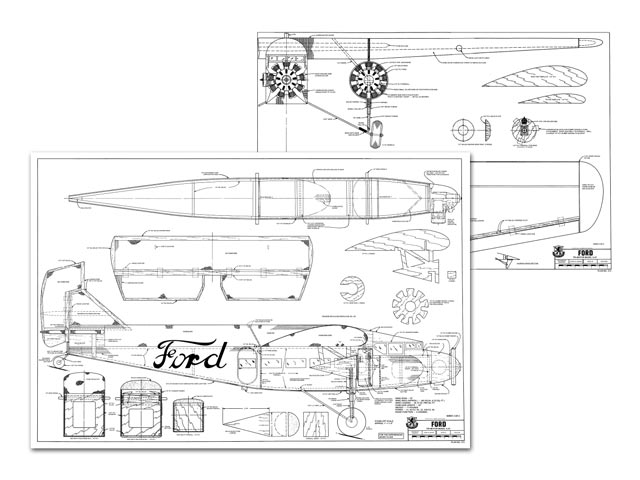 Quote: "The legendary all metal Ford Trimotor first rolled out of Ford's Dearborn, Michigan factory in 1926. Forty-eight years later, the 'Tin Goose' is still flying. You can combine history and nostalgia with this easy-to-fly Ford 5AT constructed of foam and corrugated cardboard.

Almost forty-eight years ago, in July of 1926, the first all metal Ford Trimotor airplane rolled out of the Ford shops at Dearborn, Michigan. Incredible as it may seem, there are still several of these big three engine all-metal airplanes still flying. No other airplane contributed more to the early development of our airline system than the Ford Trimotor. It was the first to fly on a regular scheduled airline operation, and the first to carry two uniformed pilots and a flight steward. The Ford could fly equally well on any two of its three engines, and could maintain level flight on only one engine. The Tin Goose could land in any small field and could take off in three times the length of a football field fully loaded! One of the most famous Trimotors of all was the Floyd Bennett. Admiral Byrd flew this airplane over the South Pole on Thanksgiving Day, 1929.

Two models of Ford Trimotors were built, the 4AT and SAT. The former had a wing span of 74 feet and was powered with Wright J5 or J6 engines of approximately 225 horsepower each. The larger 5AT, which was our choice for a model, was nearly 78 feet in wingspan and was powered with three Pratt and Whitney Wasp engines of over 400 HP each.

Most of us who construct and fly small radio controlled aircraft have, at one time or another, fallen in love with a particular design. In my case, it ran from early WW I biplanes like the Se5 and Fokker D7 to WW II fighters such as the P40 and P63. I have always been partial to scale or semi-scale and although I enjoy aerobatics very much, I have no interest in competitive pattern type flying.

I must say that I even surprised myself when suddenly I just had to build a Ford Trimotor. Immediately the thought flashed through my mind of a beautiful big silver bird powered with 3 Wankels climbing into the blue while the crowds applauded and cheered. There was one small problem however, and that was how to obtain a corrugated effect... 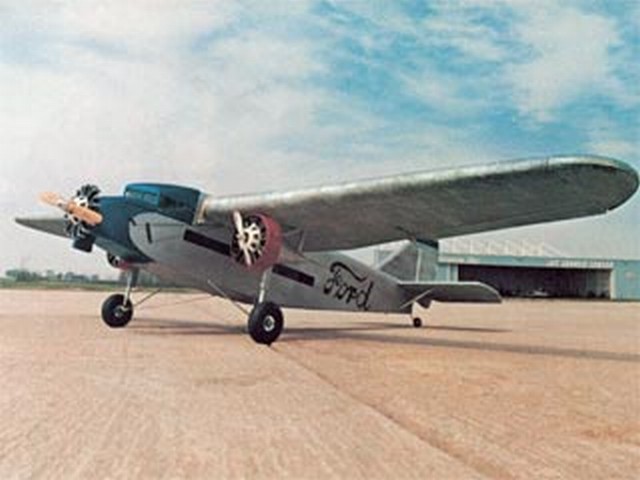