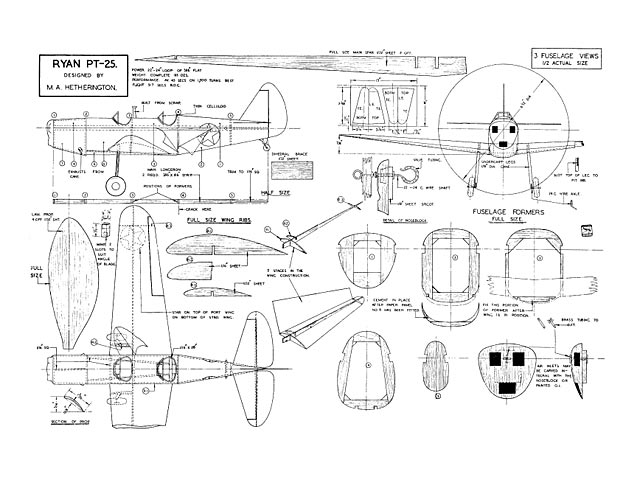 Quote: "This model is a departure from the orthodox method of construction in the fact that it is constructed mainly of thin paper. I remember a few years ago making a couple of low-wing scale type models from paper. These were intended for free flying, as pole flying was in its infancy then. The duration was not high but they flew, which was all I was concerned about at the time. With the coming of the winter months pole flying was introduced to our club (the Doncaster and District MFC), and I was prompted to build up this type of model again specifically for RTP flying. This resulted in the model about to be described.

When first taken down to the club it was received rather dubiously, but when the other fellows saw it flying this cleared away any doubts they had about its capabilities and, in a short time, they had produced quite a collection of paper flying scale models, including Henschel 123, Lightning, Helldiver and Piper Cub, etc.

Practically every type of aeroplane can be reproduced with paper construction. The only difference there is from the normal tissue and balsa type is the slightly angular appearance they present. This is not normally very noticeable and detracts very little (if any) from the general appearance of the machine. How much better is this though than the normal flying scale one sees with the stringers and formers, etc., prominently emphasised by taut tissue? (I am referring now to models whose prototype is covered with a stressed skin.) Where it occurs that the machine is covered with fabric the ribs and stringers, etc., can be imitated by thin lines drawn in indian ink or black dope on the wings and tail, etc., before they are assembled. These lines can be drawn with a mapping pen, although the ideal is, of course, a draughtsman's ruling pen. A pair of sharp scissors will he found useful for cutting out the various pieces of covering, though a razor blade will do just as well.

The author's model was covered in a smooth paper, thinner than foolscap, which can be used if desired, but the finished machine will be heavier than mine and the performance will invariably suffer. Anyway, whatever paper you use see that it has a nice smooth surface as it handles better. All the wood stated on the plan and as used in my machine was balsa, and the amount used is very modest. (A favourable point in these days.) If, however, this is unprocurable, hardwood will do just as well, providing the sizes are decreased slightly so as not to increase the weight unduly..." 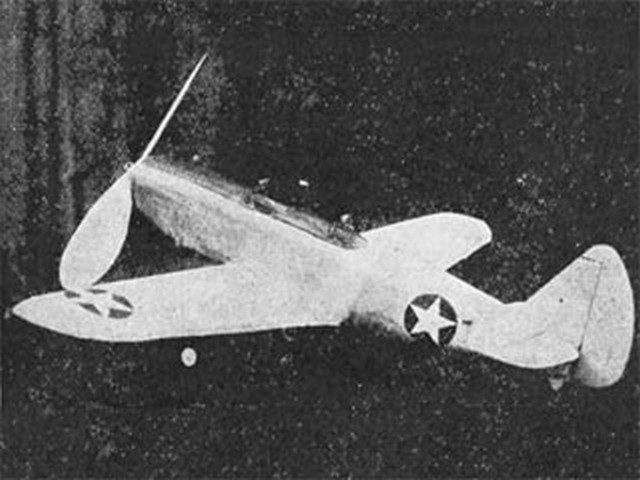