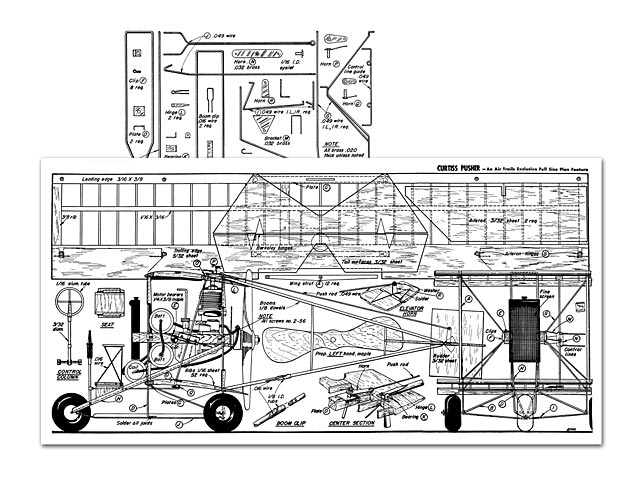 Quote: "BACK in the days when airplanes were 'flying machines' and jets were gas-light burners, Lincoln Beachey amazed America with his incomparable precision flying and stunting. He was the first to power dive and zoom, whip stall and spiral, as well as the first American to fly inverted and loop. To demonstrate the ease and precision with which he could control his Curtiss Tripod pusher, Beachey flew for miles up and down Chicago boulevards, skimming the tops of autos and trees.

Lincoln Beachey's machine was the product of the pioneering genius of Glenn Curtiss, founder of the aircraft enterprises that bear his name today. Curtiss with his talent for mechanics and zest for speed moved naturally from racing bicycles to motorcycles, to flying, dominating each field in turn.

With its premier position in aviation history the Curtiss 'Tripod' Pusher is a most interesting and challenging model project. The numerous flying wires, struts and open air controls afford the opportunity for much detail.

To support the weight of the Bantam engine successfully the landing gear and center section braces are an integral structure of piano wire, on which the wings merely rest. A difficulty common to all pusher models - flipping the prop for starting - required a radical solution. The entire tail was hinged at the upper surface and clipped into sockets at the lower wing, permitting the assembly to be swung up and out of the way without disconnecting any controls.

In the absence of a regular fuselage, the wings must be built first to provide a structure from which the remaining elements ,of the model may be located. Cut out 52 ribs of 1/16 sheet, and 6 of 3/8 sheet. This can be greatly speeded up by snipping a wing rib section from thin sheet metal and cutting around the tem-plate with a razor blade..." 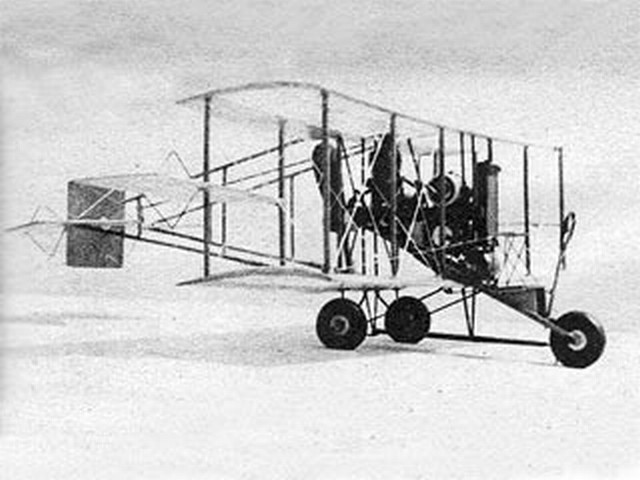