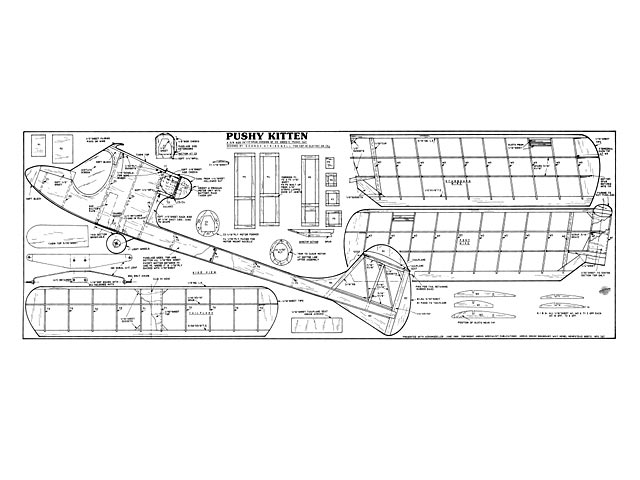 Quote: "I am a great fan of Vic Smeed's designs in general, and of his 1953 Bowden winning Pushy Cat in particular. I never did build one first time around; as an impecunious schoolboy I could not afford the relatively expensive Mills 0.75, having to make do with an ED -Bee, Using this in Pushy Cat would have meant carving a pusher prop, which, at the time, I deemed to be beyond my abilities. In fact, I never did own an original Mills 0.75. By the time I was affluent enough they had gone off the market. However, the advent of the Irvine Mills in 1987 was my chance, a strong hint to my lady wife produced one in my 1987 Christmas stocking (eat your hearts out all those who got hankies and socks) and there could only be one model to build for it! Thanks to advancing age, not to mention congenital laziness, coupled with a desire to keep the model in one piece, I decided on radio-assist...
So much for the R/C Pushy Cat, what about the real subject of this piece, Pushy Kitten? Well, my wife once again showed her imagination and grasp of things aerornodelling at Christmas 1988 when a KP01 electric unit appeared amongst my presents - she really is a sweetheart! What a super little power unit. Anyone who likes flying model aeroplanes should really have one of these devices; I cannot speak too highly of them.
After making up a charging battery with the resistor supplied and four old 1.2 Ah cells which I had to hand, I carried out some workshop tests (on Christmas Day, of course!) to establish length of run/charging time ratios. These so enthused me that I did a hasty conversion on my 2/5th size CO2 Junior. Test flown on the glorious Near Year's Day 1989, the performance was just perfect. Looking at the little J60 that evening sitting alongside the Pushy Cat on the storage rack I wondered - could I re-wire the KP unit to run backwards?
The answer was not totally straightforward. The KP's 'push for off' shaft switch arrangement precludes a direct conversion, However, a telephone call to Derek Knight (how does he remain so amazingly courteous and helpful with idiots like me ringing him up with stupid questions all day?) solved the problem, and he made me up a special 'pusher' version without the shaft switching arrangement, and wired so that an extension charging lead acted as a switch, the motor only starting when this was removed. The unit arrived a few days later. A quick test run filled me with enthusiasm, and the Pushy Cat plans were rapidly scaled to 5/8th full size to produce a wingspan of 27-1/2 inches. The structure generally follows the original faithfully, the only area of change being around the engine mount, which is adapted to accept the KP as a push-in installation, fully cowled. It was in this area that the only problem occured, since even though I raised the thrustline as much as possible from the original, it was still impossible to accommodate the relatively larger prop of the electric unit at this scale. With misgivings I cropped some 3/16in off each blade and re-balanced it. I need not have worried.
Test flown in a flat calm weather window on the stormy weekend of 25/26th February, the model amazed me by flying straight off the board, requiring only a little left trim tab to perform a perfrect 'right/left' pattern, flight being consistently between 70 and 90 seconds on a five minute charge...
As for construction there is nothing difficult. Very little wood is required to build a model like this, so do take the trouble to pick the right quality - light and firm for the fusleage sides, nice and springy for the wing spars..." 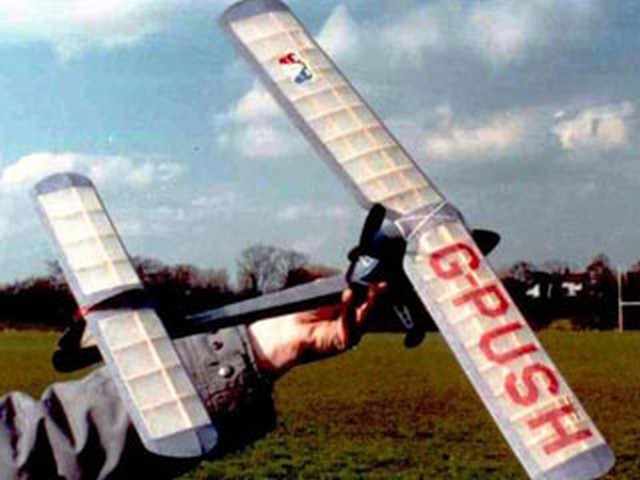