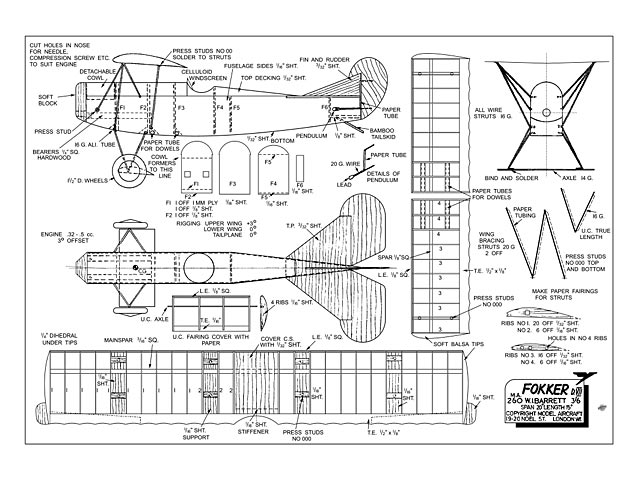 Looking around for a relatively simple scale model to build of the first world war era the Fokker D.7 catches one's eye as being an ideal prototype. The absence of rigging wires, the straight lines and large engine cowling all lend themselves to the design of a scale model (with the exception of the necessary dihedral, etc). The original model was designed around the Kalper 0.32 diesel, but one has been flown with the Allbon Dart. The crash-proof construction has proved extremely effective, surviving many flights with only superficial damage.

Fuselage. Cut the fuselage formers to shape. Former A consists of one piece of 1mm ply cemented to the front of a piece of 1/8 balsa. Engine bearer holes are cut at a distance apart suitable for the engine being used. Cut the fuselage sides as marked on the plan from 1/16 hard balsa. Formers A and B are then assembled on the engine bearers, after which the fuselage sides can be added and the remaining formers fitted in their correct positions. Note that the sides begin to taper aft of former E.

Next fit the aluminium tubes to take the wing and undercarriage struts, making sure that they are cemented securely in place. Also add the paper tubes for the lower wing dowels. Note that the wing struts must be in position in the tubes before assembly with the fuselage. Fit the tailplane and elevator assembly, which should be cut from medium to soft 3/32 sheet. Cement the fin in place, and add the pendulum mechanism. The paper tube of this unit is wrapped round the wire after it has been bent to shape. The lead weight is flattened in the vertical plane to allow sufficient movement inside the fuselage..."

Update 05/04/2019: Replaced this plan with a clearer copy (patterned background removed) thanks to TonyP. 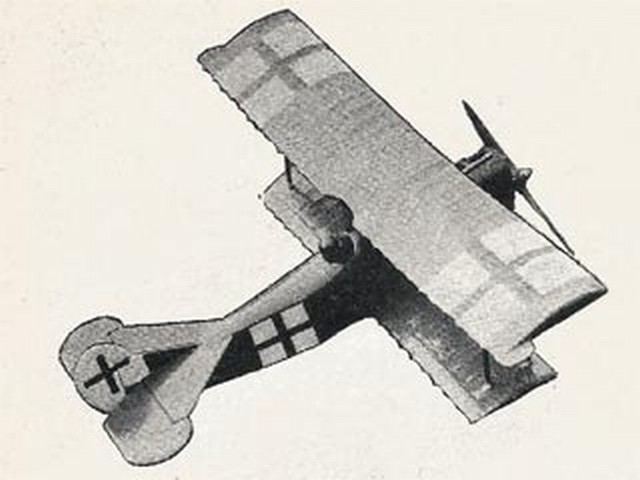