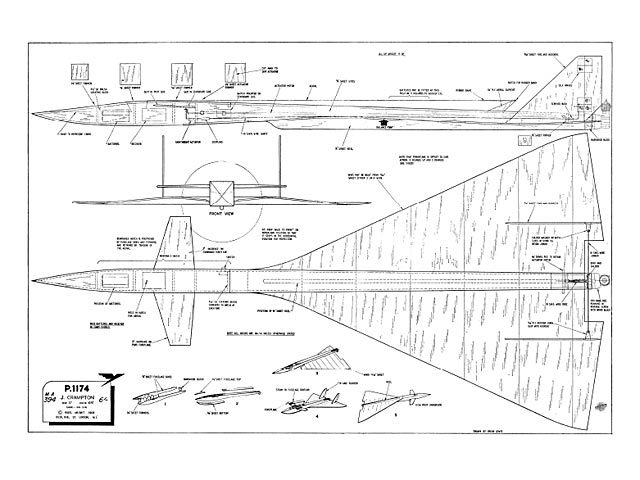 Quote: "A simple to build canard delta pusher model for single channel radio control. Designed by J. Crampton. THE P.1174 is a R/C model, based on the general configuration of the North American B-70. Its length is 3ft 6in and the wing span (at the trailing edge) 22in. The sweep of the Ogee plan form wing is 68 deg. The weight of the model, complete with radio three 1 volt pencell batteries and Cox 0.8cc engine, is 15 oz. The twin rudders are coupled together and operated by a Citizenship rubber powered sequence actuator and the radio gear is RCS. The model is trimmed with the differential incidence shown on the plan to fly in a gentle turn to the right, so that quick pulses produce a left turn. After a hand launch the model is made to climb in a series of S turns into wind and, when at about 200 ft it can be left to orbit in a climbing right-hand turn as it drifts back overhead. When the motor cuts it assumes a fairly steep gliding angle and loses height rather quickly - still turning to the right. Quick pulses on the transmitter just before landing straightens - and levels - out the flight path and the model touches down smoothly. This is a very satisfying design for several reasons: 1. It is simple to make - no ribs, spars or longerons. The fuselage box is made up from 1/8in thick balsa and the wings, fins, rudders and foreplanes from 3/32in balsa sheet. 2. Rudder effectiveness is the same with power on or off. 3. The model is remarkably stable especially in roll. 4. When rudder is applied the resulting yaw instantly applies bank in the required direction. When the rudder is straightened the model assumes its trimmed attitude at once. 5. The model is very strong and can take terrible punishment. 6. With a 'pusher' prop the model stays perfectly clean no oil anywhere..." 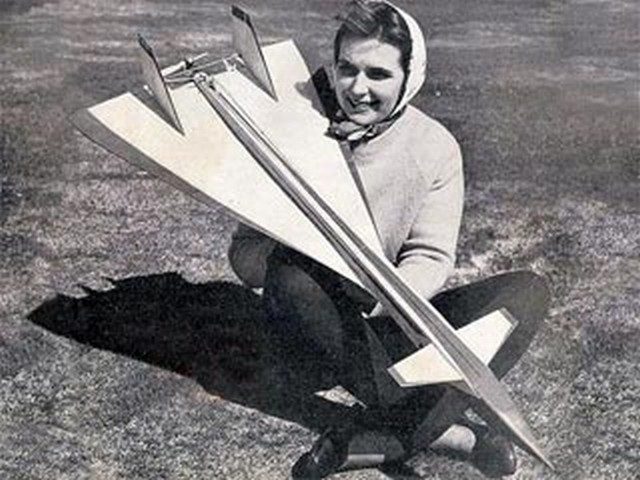 Just a cautionary tale on this one. I decided to build the P1174 in 1970 and it was one of the few models that finished up being scrapped before it was finished. After finishing the structure, I started to give it some coats of dope prior to installing the RC. To my horror the wing warped alarmingly, going from the intended S-curve at the root to something looking more like a papadam at the tips. There was no way I could get the wing curve back to shape, so I binned the model. If I built it again, I would dope the wing with well thinned dope and weight it down flat for a few days before gluing it to the fuselage.
ChrisPinn - 11/11/2017
Reading the comment about P.1174 warping after doping, brings memories. Since the date was 1970, the dope used may have been Aerogloss or a similar buterate dope with plastizer in it to promote a good finish. I was told by a hobby distributor that it didn't completely cure for years. I seem to remember 7 years. This explains why after a few years my scale models skins would curl and of course, silkspan coverings would split. He was a free flight modeler and always used thinned nitrate dope for base coats with thinned other brands buterate color coats. I have had better success ever since. Much less worry today as Aerogloss is gone.
EdShearer - 13/11/2017
So many things we've forgotten. I had a similar problem recently with the center section sheet balsa on a wing. When I applied fiberglass tape to the joint (with glue not resin) the balsa warped pretty badly. Thankfully it was on the bottom where it wasn't seen very much. The cure of course is to use C grain quarter sawn balsa, much stiffer and will never warp. I learned this on a Top Flite Roaring 20 kit I built many years ago, wing covered with wet silk. The thin balsa furnished in the kit warped like a Pringles potato chip and I had to build a new wing. C grain balsa on the second try worked fine, stiff and no warps.
DougSmith - 13/11/2017
Add a comment