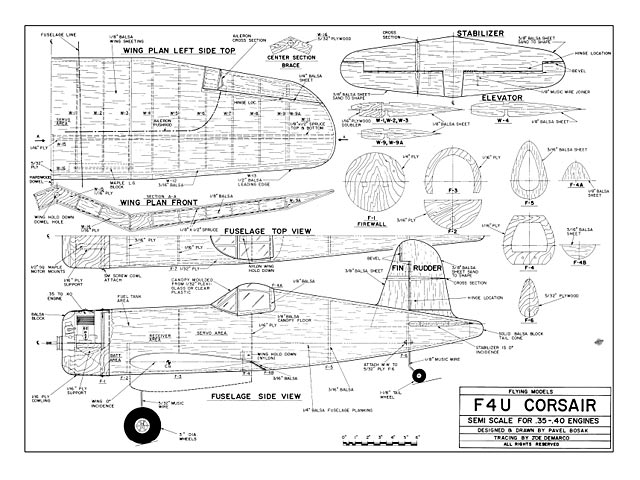 Quote: "I wanted to build an attractive, space-saving, fast, and good-flying model in the sport scale category. I chose the F4U Corsair. Its thick fuselage and gull wing suited my first requirement pretty well. The choice of a hot .40 schnuerle engine would make it fast and its wing span, space saving. But only time would end up telling how well it would fly. Now, after building and flying it, I can report that it flies very nicely and its speed is so great that it could easily give some stiff competition at the Reno pylon races. At this point, I'm still using only the four primary channels for control without any extra functions, but in the future, I think I shall add a fifth servo for dropping a fuel tank or a bomb to get a few more points in scale competition.

The Corsair was undoubtedly one of the most successful Navy fighters to enter service before the era of the jet aircraft. Serving in both the Navy and the Marine Corps, this plane was superior to the Japanese aircraft it encountered in the Pacific theater of World War II. Corsairs shot down 2,140 planes against only 189 loses of their own. This extraordinarily high ratio made it better than any Japanese plane and many experts claim that it was better than the Army Air Corps vaunted P-51 Mustang. Production of the Corsair continued until December 1952 and it was the last classic propeller fighter produced in America.

The prototype had its maiden flight in May, 1940 and it was quite apparent, even after only the first 30 minutes flying time, that its qualities would be extraordinary. But there was still a lot left to improve. The linkage controlling the aileron had some 96 modifications before the design was settled. The final armament was three 50 caliber machine guns in each wing with 400 rounds of ammunition each. Under each wing there were two bomb racks. The first operational unit got the F4U-1 model in September, 1942. After the 689th Corsair was built, a new version was introduced with the more familiar bub-ble canopy. From that point on, many variants were produced differing in engines or equipment, without any substantial change in its outward appearance.

Construction: Wing: Don't let dreary visions of complex structure put you off. The model is not that complex and can be built by any experienced modeler. Begin with the wings. First cut out all your wing parts. All the ribs are 1/8 balsa. The wing consists of a center section which is built as a unit and two outboard panels which are built onto it.Construction is much easier if you cut out all your wing parts first before assembly.

The ribs are all 1/8 balsa. The center section ribs, W-1, 2, and 3, are all the same shape and their outline is on the plan. The ribs for the outer wing panels, W-4, 5, 6, 7, 8, and 9, are made by what I call 'rasp interpolation'. It's the sandwich method of shaping. You'll have to make a ply template of ribs W-4 and W-9 with a chord reference line as shown on the plans. Sandwich ten rectangular pieces of 1/8 balsa between the two templates and bevel the stack to the dimensions of the two end templates. That will give you two each of ribs W-5,6,7,8, and 9. Cut out two more ribs for W-4. After you cut out the notches for the top and bottom spar structure, make sure you also cut out or drill holes for routing the aileron pushrods. It will be quite difficult to do it after assembly.

Assembly of the cut-out parts begins by constructing the full length bottom wing spar and web. Figure A gives you the shape of the two piece web. The two pieces shown complete one half of the wing. You'll need four pieces in all which are joined by the ply dihedral braces W-15 for the center section, and the two W-16s, one for each of the outer wing panels. Consult section A-A, the wing plan front view for the actual dimensions. Assemble the wing ribs over the spar/web assembly with reference to the plans for correct alignment. Rib W-3 will have to be cut to al-low for the W-14 dihedral brace to carry through from W-2 to W-4 without interruption. After assembly, add the 1/16 ply doublers to the noses of ribs W-1, 2, and 3 for reinforce-ment of the landing gear block area.

Once that's done, you can add the top spar and you're then ready for the leading edge. It's done in two pieces, forward and rear. The rear piece, W-12, is glued to the noses of the wing ribs and is flush with the bottom and top of each rib 'nose'. This allows the bottom and top wing sheeting to be glued over the edge of the W-12 rear leading edge for a good firm glue joint and to butt to the rear of the front leading edge..." 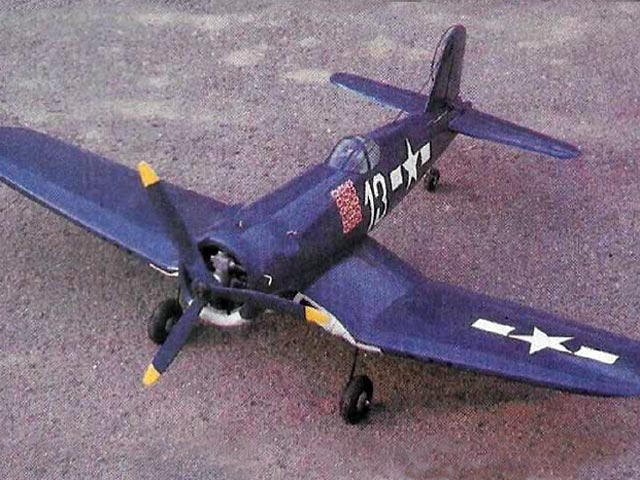