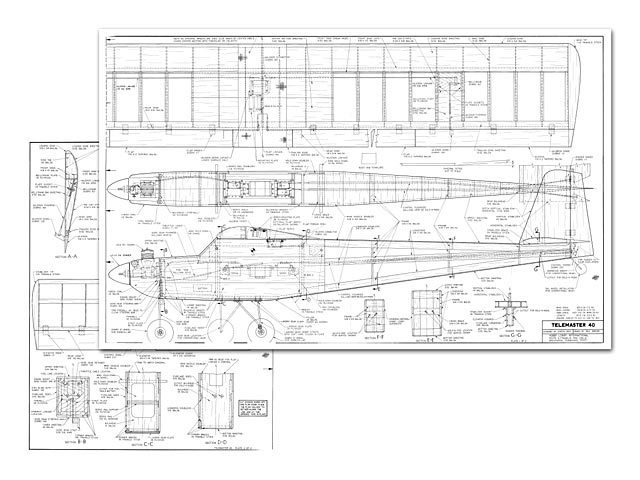 The original Telemaster (oz5043) design was from Alexander Engel in 1968. This here is a later later kit (circa 1980) for 40 power. Later versions used strip ailerons. This one also shows flaps and tricycle gear layout.

Telemaster 40 is ideal for a beginner. It includes the most complete and descriptive building instructions ever put into an RC airplane kit. The 106 step-by-step construction photos explain the assembly of this kit better than the instructions in any other kit. Once you build the Telemaster 40 you will understand fully how to build and set up for flight any balsa wood RC model airplane kit. While an experienced modeler wouldn't even need to read the instructions (assembly is straight forward and conventional) a beginner will find every step explained.

Telemaster 40 flies like no other model airplane in the world. Experienced RCers will like it because it will do most aerobatic maneuvers plus some slow-flight stunts that are hard to believe. RC Modeler Magazine's Product Review had these things to say about Telemaster 40's flying characteristics: We thought (the flaps) would be fun to play with. And they are. Talk about slow flying, we've repeatedly flown the (Telemaster 40) backwards in a light headwind. And there was a zero ground speed landing we did in the same wind. Now that's fun! We bet that with a long enough runway it would probably fly with a .15. We found that the (Telemaster 40) handles even better in the air than our all time favorite Senior Telemaster rolls are quicker and more axial.

Telemaster 40 comes with tricycle landing gear so beginners can have easy tracking on takeoffs. But the experienced RCer will probably prefer conventional landing gear with a tail wheel. The Telemaster 40 can be built either way (although there is no tail wheel bracket in the kit).

Telemaster 40 may be the best RC beginner's airplane ever. RC Modeler Magazine seems to think so: We feel that the Telemaster (40) makes an ideal first RC model. The detailed construction notes help the novice get from a box of pieces to a good looking model. And, its smooth, stable handling in the air will keep it that way. To check the handling of the Telemaster 40 in the hands of a beginner, we brought a friend out to the flying field who had never built or flown RC to try it - it wasn't long before he was flying up there on rudder and elevator and having a good time.

Telemaster 40 is a lot of airplane for the price. 73 inch wing span and 848 square inch wing area put it in the same size category as much more expensive kits. But, the plane will fit inside compact cars..." 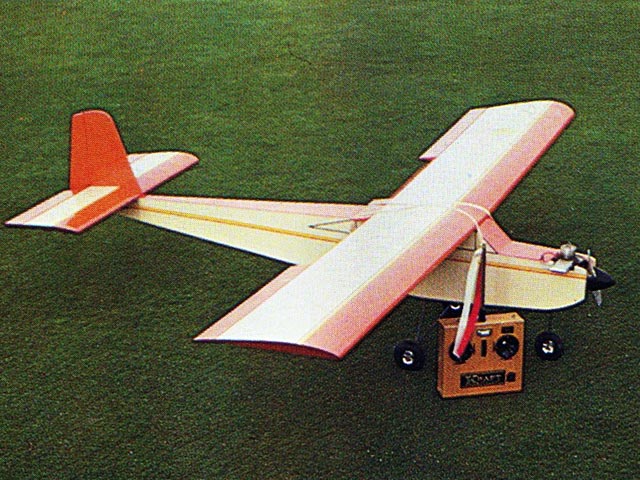 I built my Telemaster 40 from the Hobby Lobby kit, which was cut by Great Planes. As such, the wood quality was excellent, and parts fits equally so. I modified my example with bolt-on wings, and incorporated the flaps and tricycle landing gear in my build. Power was originally an OS Max H 40, which flew the model very well. The model will fly inverted, but is certainly not happy doing so, requiring almost full down-elevator deflection to hold inverted flight. Best to roll out of inverted to level flight, as the 40 engine does not have quite enough power to execute a half-loop to right-side-up unless you have plenty of altitude. I later installed a Super Tigre 60, which certainly hauls the model into the air quickly, but the Telemaster does not fly any better than with the 40, and in my opinion, exhibits undesirable flight characteristics, so I have pulled the 60 in favour of a modern-day 46 2-stroke. My model is presently mounted on snow skis, but I have not had the chance to fly off snow as yet. The flaps add a lot to the slow flight characteristics, and are lots of fun to play with. The model will virtually hover into a modest head-wind with full flaps deployed, and has truly awesome slow-flight abilities using flaps. The OS 40 would be a perfect power choice for this model, even if the ready-to-fly weight is at the maximum specified. An excellent trainer, and large enough to be easily visible in the air. Full power is required only for takeoff and clowning around; the model easily maintains level flight at less than 1/2 throttle. About 1/4 flap on takeoff makes for a very nice scale-like flight path. You can use full flaps on landing, but keep on just a bit of power at touchdown to smooth out the landing. Tricycle gear makes ground handling nice and easy. I usually fly off grass, but ground handling off tarmac is equally good, except it takes much longer to slow down! I am including some pictures of my two Telemasters - the other is a Senior Telemaster [more pics 003-005]. The "40" is covered in MonoKote, while the Senior is covered in film acquired from HobbyKing.
Rudy - 03/11/2017
Pictures of my Telemaster 40 [more pics 006-008]. Electric power 4S LiPO. Happy Landings.
David Davis - 18/10/2019
My younger brother got me back into R/C flying following a serious accident . I had originally been instructed on a similar training aircraft . The new Keil Kraft Super Sixty . I found that the Telemaster was just the aircraft ! In fact I bought the model off a Commercial Pilot , who under brother's R/C instruction at the time , reported no elevator control . So being a Com. Pilot used what control he had to fly plane . Using throttle to land plane they found elevator pushrod had come off control surface horn ... WHAT A PLANE IS THAT
craig m casey - 03/02/2020
Add a comment