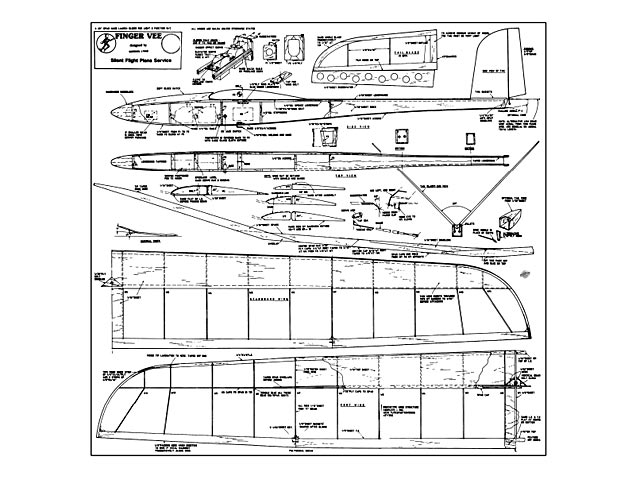 Quote: "This little glider has been around since 1988. It is still flown from the flat and will perform in the merest whiff on the slope. These small gliders are economical to build and fun to fly. They also have the added appeal of compactness, enabling them to be transported fully assembled in the average size saloon car. Just toss it in the back of the car, drive to the nearest flying site, switch on and away she goes.

Finger Vee was initially built to investigate a wing design incorporating increasing lift coefficient towards the tips, the opposite to the norm. This is achieved by progressively increasing section camber, and it gives a more favourable lift distribution along the span of the wing. To compensate for the wash-in that this incorporates a predetermined amount of geometric washout is used to level off the lift coefficient peaks. This achieves a desirable lift distribution and also controls any tip stalling tendencies. The aspect ratio is a balance between wing efficiency and turning ability, while the swept tips reduce drag at higher angles of attack by encouraging vortex shedding. There is some evidence to suggest that a small amount of tip up sweep towards the trailing edge is also advantageous in this respect.

Various wings have been built incorporating these features, but employing different structural layouts. The early wings used open structures with no leading edge sheeting, together with Warren truss rib bracing to the rear of the spar for torsional rigidity. Later wings have leading edge sheeting to form a D box with the spar. Both types can be built down to 2 to 3 ounces weight (57 to 85 grams) with care, using the 1/32in (.8mm) ply capped I beam spar shown on the plan..." 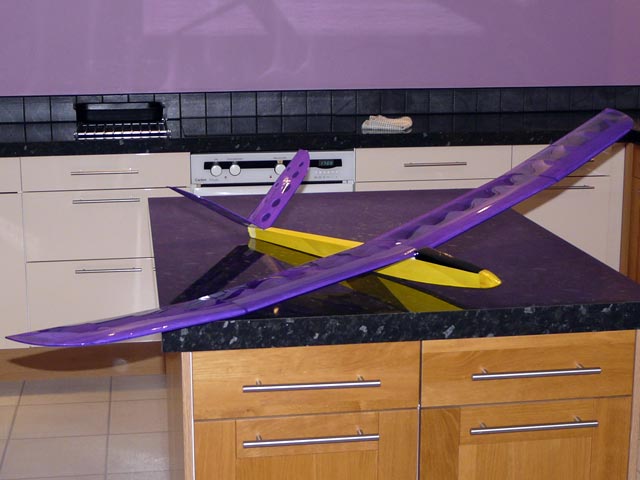 Hello, I'm Carlo Santangelo, I hope Mr. Gordon Rae doesn't get angry if I took the liberty of modifying his FingerVee into an Electric Vee [pics 004-006]. I liked the simple and clean shape in flight seems to float in the air It was also necessary to modify the tail plan, bring the inclination from 90 degrees to 110 and make them bigger with the whole moving surface, as shown in the drawing there are big stability problems. Compliments for the wonderful site, an immense forge of ideas.
Carlo Santangelo - 30/04/2021
Hiya, I haven’t flown for about ten years but just got the bug again. Wish I hadn’t sold this one though [main pic]. Built from scratch with CF spars (for club hi-start that was STRONG) and narrowed fuse for less frontal area. Flew beautifully.
AndyC - 10/10/2021
Add a comment